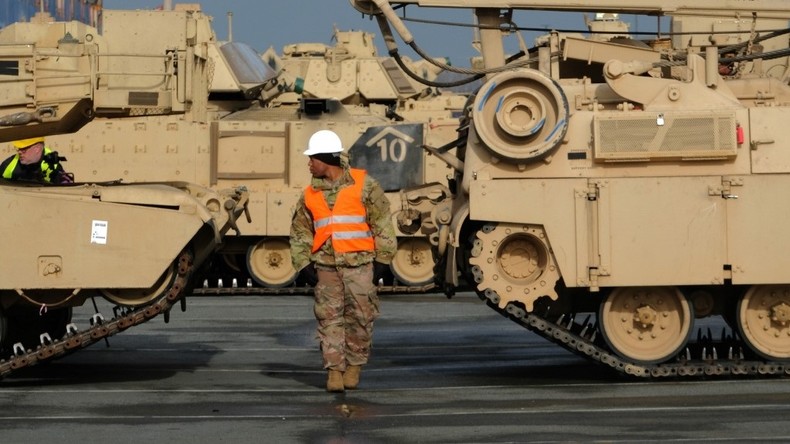 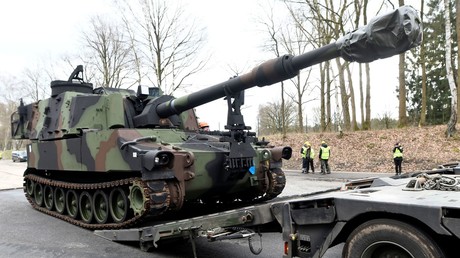 Posted by eirenae at 1:32 PM No comments:

File photo: Xinhua
The World Health Organization (WHO) officially declared the coronavirus a global pandemic, sparking criticism of how countries beyond China delay and waste opportunities to contain the virus spread since the outbreak. Combating the pandemic would seriously strain resources, flow of goods and people, risking a global recession. With anticipated confrontations and frictions amid the economic downturn caused by the global pandemic, analysts believe the turbulent situation will also reshape the global geopolitical landscape.

While the novel coronavirus pneumonia (COVID-19) has caused more than 118,000 infections across 114 countries and regions with a death toll of 4,291, China, which implemented stringent prevention and control measures at a painful cost, should be highly cautious of a backflow of global contagion into the country despite the peak of the current outbreak of COVID-19 in the country is over, analysts warned.

Tedros Adhanom Ghebreyesus, WHO Director-General, declared COVID-19 a pandemic at a media briefing on Wednesday, claiming that the WHO is deeply concerned by the alarming levels of spread and severity and by alarming levels of inaction.

He also noted that since being notified the first cases, the organization has called "for countries to take urgent and aggressive action, and we have rung the alarm bell loud and clear."

Although the window of opportunity to contain the virus has not been completely shut, countries would pay a much higher price to combat this war as some have already missed their best chance to curb the spread of the virus, analysts said.

The WHO declaring COVID-19 a pandemic aims to call on all member countries again to invest more resources and make a greater political commitment against the disease, the Chinese Foreign Ministry said on Thursday.

China is willing to work with the global community to fight this battle and score the final victory while pushing forward the construction of a community with a shared future for mankind, the ministry said. 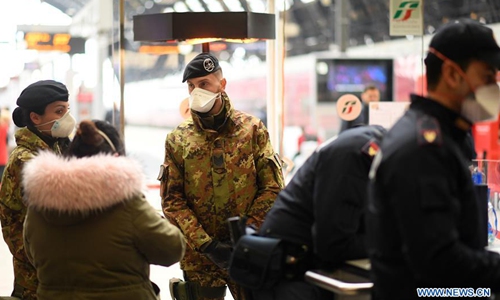 Italian soldiers with face masks are on duty at Milan Central Railway Station in Milan, Italy, on March 9, 2020. Measures to stem the spread of the novel coronavirus will be extended to the entire country in the next hours, Prime Minister Giuseppe Conte announced late on Monday. (Photo by Daniele Mascolo/Xinhua)
Time wasted

Declaring COVID-19 a pandemic shows that the opportunity to contain it has been wasted by some countries, especially those in Europe due to a slow response and underestimating the epidemic, Zeng Guang, chief epidemiologist of the Chinese Center for Disease Control and Prevention, told the Global Times on Thursday.

"Some countries have taken decisive and effective measures at the early stages of the outbreak, easing the severity of the epidemic like South Korea, Japan and Thailand," he said, noting that China's experiences are worth learning from, but could not be blindly replicated and should be applied in line with their own situations.

The WHO also noted that the challenge for many countries dealing with large clusters or community transmission is not about whether they can implement the similar strict measures as countries like China or South Korea do, but whether they will. Some are struggling with a lack of resolve.

After China implemented a city lockdown in Wuhan in Central China's Hubei Province, where the first confirmed coronavirus case was reported in the country, on January 23 and then shut down the whole province, such an unprecedented move to isolate one of the largest transport hubs in the country and putting millions of people into quarantine have not rung the alarm bell for other countries, who regrettably have not react quickly enough to combat the disease, analysts said.

In Italy, although local authorities barred flights from China as the first country in Europe to do so in January, the outbreak in Codogno in Lombardy, the most virus-hit area, was detected on February 21, and within a week, more than 800 people contracted the disease, media reported.

"Throughout February, we only had two cases of the virus in Italy—two Chinese tourists," Michele Geraci, former undersecretary of state of the Italian Ministry of Economic Development, told the Global Times on Wednesday night in a video call.

"I think it's given the society and government a false sense of security thinking that the virus would not come to Italy, and that even if it arrives, people can be cured easily."

Such miscommunication and underestimation were repeated not only in Europe but also in the US, where governments and officials failed to prevent infection numbers from exploding within the nearly 50 days, a window period China had earned for the world, as the draconian measures it took significantly slowed the global spread of the virus.

"The pandemic would have not happened if decisive measures were taken between communities in countries at an early stage," LüJun, a professor at the Department of Epidemiology and Biostatistics of Peking University, told the Global Times on Thursday.

When China adopted strong and decisive measures to contain the spread of COVID-19 in January, including a lockdown of Wuhan on January 23, other nations totally ignored the impact of the virus and some even scolded China's measures as violating human rights, Lüsaid. 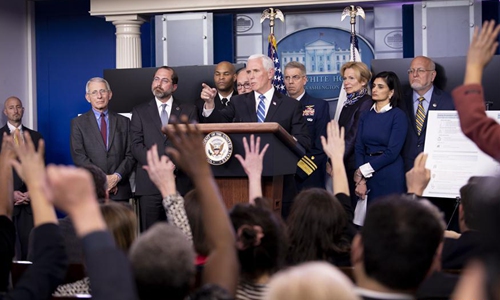 US Vice President Mike Pence gestures as he attends a press conference on the COVID-19 at the White House in Washington D.C. March 10, 2020. The number of COVID-19 cases in the United States have topped 1,000 by 11:30 pm EST Tuesday (0330 GMT on Wednesday), reaching 1,001 with 28 deaths, according to the Center for Systems Science and Engineering (CSSE) at Johns Hopkins University. (Xinhua/Liu Jie)
Blame game

In the past two months, Western media and some politicians like Mike Pompeo or White House national security adviser Robert O'Brien shifted the blame to China by criticizing the country's cover-up at the early stages and imperfect outbreak data.

O'Brien told the Heritage Foundation on Wednesday that the cover-up in China by isolating or silencing doctors on the front line "probably cost the world community two months to respond," thehill.com reported.

However, the US cover-up and delayed response to the COVID-19 have been harshly criticized by its own doctors and medical experts, especially when US CDC director Robert Redfield admitted that it's possible that some flu patients may have been misdiagnosed and actually had coronavirus. It exposes serious loopholes in the US healthcare system as well as its political system, which undermines the fundamental interests of the American people.

Facts have proven that large-scale compulsory isolation and comprehensive medical support such as the makeshift hospital model are effective. In the early stages of the epidemic, some decisions and preparations were not efficient in China. But it should be noted that this is not merely China's problem, but an inadequate response to the new virus from the whole world, Zhang Yiwu, a cultural expert from Peking University, told the Global Times on Thursday.

"Voices in the West continue to attack China for human rights violations and accuse it of concealing and misrepresenting figures of the epidemic, which is ridiculous," Zhang said, noting that this reflects the ideological prejudice of some people in Western society toward China, and also their psychological imbalance in the face of the reality of China.

On one hand, they advocated the "China Threat" theory, while on the other hand, they said China is a developing country with a poor foundation. In their minds, China's rapid development is unconventional and they tend to view China with a sense of superiority, Zhang said, noting that these are the typical tricks used by politicians in the West to politicize the epidemic and spread racist prejudice.

Some observers have also accused US President Donald Trump, who has been misleading the public by saying that the coronavirus posed a very low risk, for incompetence in handling the matter. The New York Times said in an article on Wednesday that "the failure to tap into the flu study, detailed here for the first time, was just one in a series of missed chances by the federal government to ensure more widespread testing during the early days of the outbreak, when containment would have been easier."

Instead, local officials across the country were left to work blindly as the crisis grew undetected and exponentially, the report said.

Facing a pandemic, the world has entered uncharted territory in its battle against the deadly coronavirus, according to officials and health experts, and countries are urged to take a whole-of-government and whole-of-society approach amid growing uncertainties.

The disease has become a heavy blow to the world's economy, as countries consider more travel restrictions as part of their efforts to reduce the flow of people and cargo to minimize the risk of human-to-human transmission.

During such a turbulent time, frictions and confrontations will rise amid an economic downturn, as previous pandemics like the 2009 H1N1 influenza caused multi-billion-dollar economic losses in major economies.

Countries would need to reconsider how to define traditional borders by taking into account the concept of national security and safety, while the pandemic will seriously affect the political stability of some virus-stricken areas, Li Haidong, a professor at Institute of International Relations of China Foreign Affairs University, told the Global Times on Thursday.

"Given the changing situation, countries would also readjust their domestic policies and diplomatic relations, leading to a reshaping of the global political landscape," he said.

The Chinese National Health Commission said on Thursday that the peak of the COVID-19 spread has passed as new cases in Wuhan dropped to single digits on Wednesday, and other cities in the province recorded no new cases for seven consecutive days.

However, as the global pandemic spreads, China should remain cautious over possible imported cases, as imported cases in the Chinese mainland reached 85 as of Wednesday, including 46 from Iran and 27 from Italy.

Zhong Nanshan, a top epidemiologist in China, said at a press conference on Thursday that China needs to play a bigger role in communicating with the world in the face of the pandemic, including sharing timely clinical treatment experiences with other countries hit by the disease, while the government should enforce stricter controls to curb imported cases.

And governments of other countries should treat the coronavirus as seriously as China does, Zhong noted.

"Pandemic means the threat of backflow of contagion  to China exists, though it should by no means become a reality," Zeng said, noting that over the past two months, China has improved its ability to monitor the epidemic by timely detecting and controlling it, putting overseas arrivals in strict quarantine.

"As the situation has been under control, the country is gradually resuming work while focusing on prevention of new imported cases, and it won't spare efforts to contribute more to this global fight," Zeng said.


RELATED ARTICLES:
Posted by eirenae at 6:00 AM No comments:

Posted by eirenae at 4:19 AM No comments: