From a failed attempt to clear the Calais jungle to the appalling situation at the Greek-Macedonian border, the EU crumbles under the strain of a massive refugee crisis. Even the Kafkaesque Brussels Eurocrat construct admits it – off the record, because official EU must always project a mythical image of unity: «We are on the edge of an abyss».
Across the EU and amidst Russian intellectual elites, scenarios proliferate on the imminent collapse of Western civilization, as a huge number of refugees cannot be properly assimilated. In Russia, this process is examined with extreme concern because it happens not far from Russia’s western borderlands, and involves what the Kremlin traditionally defines as «our partners».
But what if this European slow motion debacle was not enacted as a Mad Max dystopia, but rather brought about by a tsunami of Muslims ultimately displaced by Western-engineered wars?
Behold Fortress Europe
It was only six months ago that Chancellor Angela Merkel’s government took a huge gamble in adopting a so-called «humanitarian» refugee policy; call it the civilized face of the otherwise politically tainted R2P («responsibility to protect») concept, which was ruthlessly manipulated for the invasion and destruction of Libya.
Six months later, we have swarms of refugees stranded all along the Balkan Route – and progressively encircled/trapped by strict border controls, the disappearance of social benefits, creeping fences and walls, and the practical extermination of the Schengen accords. The Merkel gambit is over; Fortress Europe is back with a vengeance. 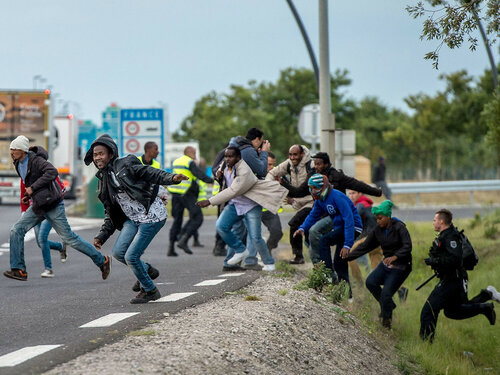 Can you hear the sound of a basket of myths crumbling? Here are a few. The notion of «European solidarity» – not to mention egality and fraternity. The notion that EU members would accept a sensible, harmonious, proportional distribution of refugees. The notion that Europe would not reject, deport and repatriate people fleeing from war zones. The notion that Turkey would «protect» the EU from the crisis.
The Balkan Route, for all practical purposes, is now sealed off to refugees while Ankara, for its part, is slowly building a wall along stretches of the Turkish-Syrian border – not as much to really contain them (after all Ankara must keep open the Jihadi highway), but as a propaganda coup.
Germany’s humanitarian refugee policy is in tatters and corroded by self-doubt; only two weeks ago Chancellor Merkel was wondering whether she should pursue «our European-Turkish approach» or whether the EU should order the absolute sealing off of the Greek-Macedonian border, pure and simple.
And that leads us close to the heart of the matter – which is of course Turkey.
The majority of German conservative politicos want Merkel to seal off German borders to refugees, while Merkel still believes in the Hand of Providence; help from «European partners» – which won’t come – and most of all from Ankara.
And that’s exactly where Turkey’s Sultan Erdogan wants her to be; as a supplicant, not as the leader of the number one European economic power.
Ankara’s power play
One of the key myths of the whole refugee crisis is that Erdogan’s AKP government is doing all it can to «contain» it.
Nonsense. The crisis itself was engineered by Ankara in 2015 – when refugees were «released» from their holding camps in Turkey under threat that they would not be cared for anymore. The refugee flood was not a «spontaneous» creation, as Syrians, Iraqis and/or Afghans suddenly decided to flee to the EU; it was directly instigated by Ankara. And Erdogan from the start was already contemplating the Big Prize; to bribe the EU, especially Merkel, to pay – at least 3 billion euros – so most refuges remain not on Turkish soil, but on one of his own neo-Ottoman sub-plots; a «safe zone» to be built inside Syrian territory.
Extra evidence pointing to Ankara’s plotting is the fact that Turkey has not increased patrols on its Mediterranean coast – the departure point for scores of refuges to try their luck by boat on their way to safety of the Greek islands. The priority for Ankara was to «close» the Turkish-Syrian border. Not really «close» it, as safe passage remains guaranteed for selected «moderate rebels».
The Warsaw-based European border control agency Frontex is absolutely convinced that the Turkey-EU refugee power play will continue. Diplomatically, Frontex’s director Fabrice Leggeri advances  that «Turkey has to make it more difficult for the migrant smugglers».
Yet that won’t happen. And Germany – and the EU as a whole – will continue to be hostages of Ankara’s political maneuvering.
A EU-Turkey summit was held in November 2015. At the time, Erdogan promised there would be more security in the Aegean coast and more raids on migrant smugglers. Too little, too late. Turkey's Aegean coast is 2,800 kilometers long. Ankara does not have the resources to police it properly.
So smuggling on a massive scale proceeds unabated. Smuggling rings with the right «contacts» – within Turkish police and AKP-related politicians – only need to pay roughly 3,000 euros for each group of refugees to clear the border and hit the sea.
In parallel, Ankara is clearly at war in Southeast Anatolia against the PKK Kurds. This is the number one priority, not smuggling of refugees, not to mention fighting ISIS/ISIL/Daesh. Turkish Prime Minister Ahmet Davutoglu could not be more straight to the point when he visited Berlin late last year: the Erdogan/Davutoglu Plan A is to «annihilate» the PKK Kurds. There is no Plan B.
Chaos, created then applauded
No one in Brussels will do it. So Frau Merkel ultimately would have to be the only EU leader to confront Erdogan and read him the riot act. It’s not only a matter of politely requesting Ankara to reduce refugee numbers. It’s to order him to do so; question him on why he released them en masse in the first place last year; and withhold any future financial rescue package, including the building of refugee camps inside Syrian territory.
The stark fact is that the whole refugee crisis – an existential crisis for Europe – is being used by Ankara as a bargaining chip for an elaborate extortion racket. Erdogan wants a tsunami of EU cash; and he wants a tsunami of concessions regarding Turkey’s negotiations for accession to the EU.
Meanwhile, there’s no concerted EU refugee policy to be seen. Not even a balancing act between humanitarian concerns and «deterrence», altruism and realpolitik. No EU political «leader» will confront the responsibility of NATO’s wars (with petrodollar GCC «support») crafting the whole crisis. The absolute majority of refugees are Syrians, Afghans and Africans who depart the continent via NATO-destroyed Libya.
Polls consistently show that a majority of EU citizens don’t want to «welcome» refugees anymore. As Belgium-based Jean Bricmont, author of Humanitarian Imperialism has correctly stressed, EU citizens who «were never consulted on the issue of refugees and who are constantly asked to make sacrifices because ‘there is no money’ understandably do not accept this moral discourse» anymore.
Bricmont is among the very few in Europe to connect the dots: «The same people who encouraged ‘humanitarian’ interventions and ‘support’ for armed insurrections abroad, that have led to perpetual wars, generating a constant flow of refugees, are now demanding that the population of our countries ‘welcome the refugees’. They first generate chaos there, then they applaud chaos here».
Well, that’s the whole logic of the Empire of Chaos in a nutshell.