Hillary Clinton pushed Barack Obama into invading, occupying and ultimately destroying Libya in 2011. Even George Bush and Tony Blair publicly stated that Libya was a valuable partner in fighting and restraining al-Qaeda and ISIS style Salafist terrorists. Obama later admitted that not preparing for the consequences of a war which he was reluctant to fight, was the gravest mistake of his Presidency.Libyan leader and political philosopher Muammar Gaddafi kept Libya not only safe but he created the highest living standards per-capita in African history. The government made sure that no one was without a home, literacy became among the highest in the world–higher than  the US, private car ownership were subsidised, education and health care was free, there was zero unemployment, black men and Arab men lived in peace and Gaddafi’s ‘man made river’ literally brought life to the desert in a country with no starvation and cheap food.
Today, the post-Hillary Clinton failed state of Libya is home to several civil wars, including a civil war between the two main powers vying for legitimacy. This is to say nothing of the fact the Libya is the de-facto destination for ISIS and al-Qaeda fighters driven out of Syria and Iraq, countries which still have governments and in the case of Syria, a strong, secular government.
Libya is now a terrorist training camp built on top of an infrastructural and political wasteland. Genocide against black Africans has been a virtually non-reported disaster ever since the 2011 NATO war which Hillary Clinton spearheaded.
It now turns out that the UK born Libyan man responsible for killing 22 people, including children and injuring over 120 in the British city of Manchester, had been in Libya training with terrorists just days before peacefully re-entering Britain.
The Manchester bomber’s parents were opposed to Gaddafi, but moved back to Libya in 2015. According to some reports, the bomber’s father works with the Tripoli based Government of National Accord.
Troops professing loyalty to the GNA recently committed a crime against humanity, slaughtering 141 people, including civilians at Libya’s Brak Al-Shati airbase.
READ MORE: Total civil war in Libya
The bomber’s father who was contacted in Tripoli maintains his son’s innocence, even though he blow himself up in a clear and unambiguous suicide attack.
Had Gaddafi still been in power Libya would not be a giant terrorist training camp. Had Gaddafi still been in power, those like the bomber’s father whose ultra-religious background was frowned upon in the secular Great Socialist People’s Libyan Arab Jamahiriya, would not be allowed back into the country.
Had Gaddafi still been in power, many Libyans living in Britain would not have gone to fight as volunteers in the NATO war where they became exposed to the tools, ideologies and methods of Salafist jihad, nor would they be exposed to the drugs that ISIS and similar groups frequently give their young fighters in order to make them as insane and fanatical as possible.
The illegal NATO war against Libya was Hillary Clinton’s war above all others. It was her who took a stable, prosperous, secular socialist country and turned it into a failed state and a terrorist playground. Gaddafi warned that he was the rampart holding back al-Qaeda from Europe, but Hillary Clinton did not care. She even laughed about Gaddafi’s inhumane, barbaric execution at the hands of terrorists.
Had Hillary Clinton not been able to convince Barack Obama and his useful war propagandists David Cameron in Britain and Nicholas Sarkozy, the dead children in Manchester might be with us today.
Hillary Clinton famously said of Gaddafi’s illegal execution, “We came, we saw, he died”. Indeed, she came, she saw, he died and now thousands of more have died in Libya, many others have died in Europe because of this, including those who recently perished in Manchester.
Source: http://theduran.com/hillary-clinton-bears-responsibility-for-the-manchester-atrocity/

A lot has been said and speculated on about the “real” objectives of Trump’s visit to Saudi Arabia. Seasoned veteran British journalist/analyst and Middle East expert Robert Fisk sees it as an attempt to create a Sunni-style NATO to curb the Iranian expansion, and his speculation is on the money, but in realistic terms, what can this visit and its “aftermath” achieve?

The Essential Saker: from the trenches of the emerging multipolar world
$27.95
More offers
Posted by eirenae at 11:38 AM No comments: 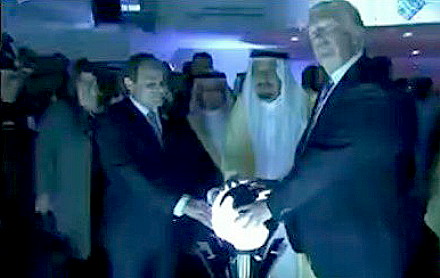 
789
The Syrian conflict must be solved through political means with the country’s unity and territorial integrity maintained, the US and Saudi Arabia has said in a joint statement released by the White House on Tuesday.
Washington and Riyadh “emphasized the importance of reaching a permanent solution to the conflict in Syria based on the Geneva declaration and Security Council resolution 2254, in order to maintain the unity and integrity of Syrian territory,”the statement read.
Read more

Trump & 55 Muslim-majority states sign pact pledging 34,000 troops to fight ISIS in Iraq & Syria
The announcement, which summed up the discussions of US President Donald Trump’s visit to Saudi Arabia last weekend, said that after the end of hostilities, Syria must become “a country that represents the entire spectrum of the Syrian community and free from sectarian discrimination.”
The Geneva II Communique (2014) and UNSC resolution 2254 (2015) envisages a roadmap for a political solution of the Syrian conflict, urging a ceasefire, transitional government and free elections in the country.
Saudi Arabia has also backed “President Trump’s decision to launch missiles at Shayrat Airbase” Tuesday's statement said further.
The US President ordered a barrage of Tomahawk missiles fired at Syria’s Shayrat airbase in response to an alleged chemical attack in the town of Khan Shaykhun in the country’s Idlib province on April 4. Washington immediately labeled Bashar Assad’s government as the perpetrators of the attack despite Russia calling for an impartial investigation and Syria denying the charge.
“The two sides emphasized the importance that the Syrian regime adhere to the 2013 agreement to eliminate its entire stockpile of chemical weapons,” the statement read.
During Trump’s visit to the Gulf kingdom, the US President and King Salman ”agreed to boost cooperation in order to to eliminate Daesh, al-Qaeda, and other terrorist organizations,” the statement also said.
“The two leaders also reaffirmed their commitment to curb the flow of foreign fighters and cutting off funding supplies for terrorist organizations.”
Saudi Arabia had previously been blamed for backing extremists in Syria, with Hillary Clinton’s leaked emails saying the Saudis are “providing clandestine financial and logistic support to ISIL and other radical Sunni groups.”
READ MORE: Trump strikes arms deal with Saudis worth $350bn, $110bn to take effect immediately
The US has provided weapons to the so-called “moderate” rebels fighting the Syrian government with the arms often ending up in the hands of Islamic State or the al-Qaeda offshoot, Jabhat al-Nusra.
Washington and Riyadh also supported the Iraqi government’s efforts to tackle the Islamic State (IS, Daesh, formerly ISIS/ISIL) terrorist group while underlining the importance of “preserving the unity and integrity of Iraqi territory.”
Trump and the Saudi monarch then turned on Iran, saying they need to “contain Iran’s malign interference in the internal affairs of other states, instigation of sectarian strife, support of terrorism and armed proxies, and efforts to destabilize the countries in the region.”
READ MORE: US changes tactics against ISIS, working on plan with 'enthusiastic' Russians
They also said “the nuclear agreement with Iran (signed under the Obama administration) needs to be re-examined in some of its clauses,” the statement read.
https://www.rt.com/news/389484-us-saudi-syria-territorial-integrity/
Posted by eirenae at 3:43 AM No comments: