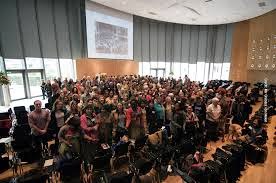 Over 900 women from 80 countries assemble today at the World Forum to strengthen women's power to Stop Wars. Nobel Peace Laureates Mairead Maguire. Leymah Gbowee and Shirin Ebadi repeat the call of Berta von Suttner „Lay Down your Arms“. They ask to stop demonizing and dehumanising political leaders that have been elected by their people. Madleine Reese, general secretary of the Women's International League for Peace and freedom (Wilpf) expresses the need to redirect funds from the militray to social needs. Amy Goodman from the alternative US „Democrazy Now“ is calling for independent Media that is representing the forth estate is not for state, a media that helps expressing concerns over war and peace. Women present are convinced to represent a majority, not even a silent majority of world citizens who wish to bring about PEACE.
Women will continue to work for peace, the majority of world citizens will not be silenced.