Iran Deal:Outcome to Benefit All

„Lysistrata, a female character of antic Greece, reasons that because both Athens and Sparta are of a common heritage and because they have previously helped one another and owe a debt to one another, the two sides should not be fighting.“ 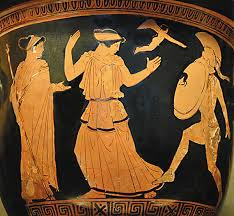 There seems some actuality in this bridge building female idea. Are 70 years of global postwar confrontations not enough? Is peace still a women's issue? Has it ever been? The founding mothers of Women's International League For Peace and Freedom thought it was. The turn of the 20th century saw a bunch of influential female pioneers for peace: Bertha von Suttner, Nobel Peace Price initiator, Jane Addams, social reformer, Aletta Jacobs, doctress, Anita Augspurg, lawyer, Rosa Luxemburg, economist, Clara Zetkin, teacher were among the most outstanding women of their days, struggling each in her way for peace and justice.
Mairead Corrigan-Maguire, Nobel Peace laureat of 1976 says „peace is a human right“ and she continues to struggle for it. Indira Ghandi was not the only head of an influential state, who paid with her life, while struggling for peace in the international arena.
However, peace, unfortunatelly, is a controversial issue, among women, too. Women's Suffrage Societies with 50,000 members, and the smaller Women's Social and Political Union, both split on the war issue.1
So if women 'peace makers' want to help save humanity from the scourge of war and militarism and all the violence that comes with it, that affects women, children, the elderly and the poor in the first place, we have to join forces with those indivuals, states and larger alliances who work for the same ends. We simply cannot rely on women alone, nor on former peace alliances, parties or unions. It is tragic but true: Success in the struggle for women's rights pushes more women to the side of those in power, to the side of the military machine. Having said this, it does not necessarily mean that the struggle for peace is lost, on the very contrary. 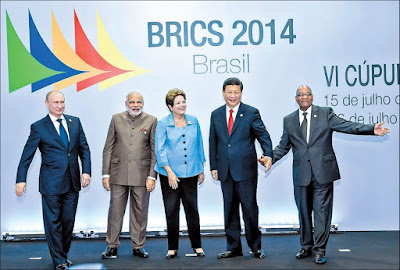 Major changes in global human affairs and in the balance of power are under way. We are witnessing tectonic shifts that will eventually help better the human fate. Those developments will help improve the situation of women. Positive tectonic shifts from West to East, from North to South bear the potential to saveguard peace on a global scale. Our duty as peace loving people, as women who strive to overcome structures of violence is raising awarness towards those driving forces and to rally local support. Consciuosness is the key factor in this potentially healing process.
For anyone who cares to see clearly, it has become more than obvious: The US strive for global hegemony, supported with all its destructive consequences by the Western world has come to a dead end. The policy of blackmail, of sanctions, of war and desasterous military interventions has failed the world over. The unique advantages after the end of the  Cold War have been gambled away lightheartedly, carelessly.

Now is the hour of those, who struggle more and more successfully for a multipolar and a multifacetted world, a world in balance, a world in harmony, a world in which unhindered trade will bear fruits for all its citizens. Such notions are based in a very old culture of nonviolence. They are grounded in philosophies such as Konfutse's, Laotse's and Buddha's. Cultures of non-interventionism are now taking the lead in world affairs. Countries like China, Brazil, Russia, India and South-Africa united under the logo of BRICS have re-kindled the true spirit of international law as laid down in the UN-Charter and its follow up-Conventions. 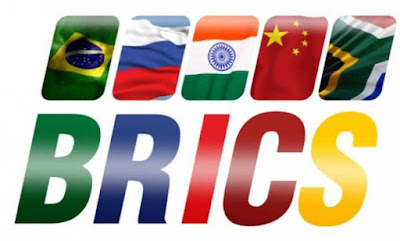 BRICS members are strongest not only in demografic numbers and economical figures but also in space and spirit. Their united efforts are already being supported by the SCO-Shanghai Cooperation-Alliance, an expanding body of member countries like Kasachstan, Kirgistan, Usbekistan, Tajikistan but also by observers like Afghanistan, Belarus, Iran, Pakistan and by dialogue partners as Mongolia, Turkey and many more. These recent alliances are not striving for hegemony, they do not count on military strength, they do not even mean to challenge aggressive NATO but in reality they do weaken its possibilites to enforce their will on others.
BRICS has come up with a New Development Bank whose intention is to assist poorer countries in building up their infrastructure unconditionally. 2 NDB offers an alternative to the World Bank and the IMF, whose policies have had destasterous effects on weaker countries so far. 3 . This newly created bank is supposed to mainly support the development of the Asia-Pacific region. But it also wants to be seen in connection with the New Silk Road Project4.When completed, like the ancient Silk Road, this vision will connect three continents: Asia, Europe, and Africa. The chain of infrastructure projects will create the world’s largest economic corridor, covering a population of 4.4 billion and an economic output of $21 trillion.  In addition China has initiated the AIIB Asian Infrastructure Investmentbank, The launch of an Asian International Infrastructure Bank (AIIB), will provide seed funding for the project, with an initial Chinese contribution of $47 billion. It has already won 57 countries to join in as founding members, including many „friends“ of the USA (!)

On July 8-10, 2015, the summits of both the BRICS and the Shanghai Cooperation Organization (SCO) took place in Ufa, Russia. These events occurred in a particular context in which the West as well as Asia is facing a growing terrorist threat, and diplomatic and military complications are multiplying on the geopolitical scene.  Syria, Ukraine, the Pacific Ocean are all geographic areas where conflicts could potentially turn into major bloodier wars. This offered an opportunity for Russia to successfully assess the diplomatic stance of its partners as regards the talks of the P5+1 over Iran’s nuclear program.

However, this is mainly about economics and finance that these two summits could be of significant importance following the establishment of the new Asian Infrastructure Investment Bank (AIIB) which ambitions to provide the BRICS and all partner countries with the financial means they have not been able – or not wanted – to obtain elsewhere, meaning the IMF and the World Bank. All this was happening as Greece could be just days or weeks away from leaving the euro area and become the first “customer” of this alternative world finance, much to the discontent of the Euro-Atlantic alliance.5 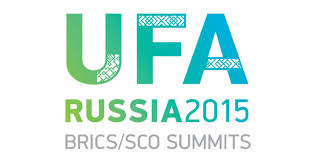 Peace workers are aware of the need to establish trade relations and treaties on an equal footing if violence is to be overcome in international relations.
Russia and China have been untruthfully portrayed as  our enemy nations. In reality they are both  our partners in trade and they do always refer to us in these terms. Facts need to be taken into account, if we want to make a successful contribution for world peace. We might not love each other but we do indeed need each other and we do  have to treat each other with respect.
It seems to me that as women, as peace makers, as citizens who work for total emancipation and for overcoming structures of violence we need to spread the word about the recent UFA summit in Russia. It is also important to talk about the Saint Petersburg economic gathering, about the general trend of  economic weights  shifting away from the West.

As women we tend to be  aware of the fact  that structural imbalances and structures of unhindered violence always hit the weakest ones the hardest. We therefore need promote the word about the global processes under way. We must talk about activities for more peaceful and more effective trading efforts, for alternative fiscal solutions that are putting limits on  the dollar based Bretton woods system. We need to support all diplomatic efforts on non-military conflict solutions as recently took successfully place with the  P5+1talks over the Iran nuclear issue*. We need build up support for the Minsk Peace agreements and for the Geneva process to end the war against Syria. We need to build up respect for other nations and their achievements as prescribed in the frames of the international law system, the  UN-Charter + follow up Conventions. These documents must be studied and brought home in its essence to our constituencies.
By working for such objectives women can indeed help build up momentum to save us all from the scourge of war and from the environmental distruction that follows war and militarism as rain follows the cloud. Women are strong, women are multi-tasking, women are brave and together with noble minded men we sure will overcome the aggressive brutality prevailing in our days, eventually.
May the ancient Greek spirit of Lysistrata and  of  its creator  genius  Aristophanes guide us.
__________
1https://www.opendemocracy.net/5050/cynthia-cockburn/womens-power-to-stop-war-hubris-or-hope
2 The New Development Bank BRICS (NDB BRICS), formerly referred to as the BRICS Development Bank, is multilateral development bank operated by the BRICS states (Brazil, Russia, India, China and South Africa) as an alternative to the existing US-dominated World Bank and International Monetary Fund. The Bank is set up to foster greater financial and development cooperation among the five emerging markets. Together, the four original BRIC countries comprise in 2014 more than 3 billion people or 41.4 percent of the world’s population, cover more than a quarter of the world’s land area over three continents, and account for more than 25 percent of global GDP. It will be headquartered in Shanghai, China. Unlike the World Bank, which assigns votes based on capital share, in the New Development Bank each participant country will be assigned one vote, and none of the countries will have veto power.
http://ndbbrics.org
3https://en.wikipedia.org/wiki/Asian_Infrastructure_Investment_Bank
4“How Can the World Be Win-Win? China Is Answering the Question.”http://thediplomat.com/2014/05/chinas-new-silk-road-vision-revealed/http:// „New Silk Road Could Change Global Economics Forever“ time.com/3893977/new-silk-road-global-economics/
5http://cyceon.com/2015/07/07/aiib-in-the-shadows-of-brics-sco-summits-in-ufa/
*http://www.strategic-culture.org/news/2015/07/21/iran-deal-implications-and-lessons-to-draw.html
Posted by eirenae at 5:54 AM No comments: EIRENE (or Irene) was the goddess of peace (eirênê) and of the season of spring (eiar, eiarinos). Late spring was the usual campaign season in Greece when peace was most at risk. Eirene was one of three Horai, goddesses of the seasons and the keepers of the gates of heaven. Her sisters were Eunomia (Order or Good-Pasture) and Dike (Justice).
She was probably identified with the Hora Thallo(Green Shoots), whose name Hesiod gives to Eirene as an epithet in the Theogony. Her opposite number was Polemos (War).
In classical art she usually appears in the company of her two sister Horai bearing the fruits of the seasons. Statues of the goddess represent her as a maiden holding the infant Ploutos (Wealth) in her arms. In this guise she was identified with Demeter and Tykhe.
Posted by eirenae at 1:01 AM No comments: