Read the London tabloids. Russia has launched “a full-scale invasion”. A vast propaganda campaign has been launched. Where is the evidence?
The media is spreading “fake evidence” in the week leading up to the Wales NATO Summit.
The objective is to herald Russia as the aggressor. What is at stake is a strategic public relations stunt.
Sixty countries will be represented at the NATO Summit in Wales on 4-5 September including the 28 NATO member states.

The media lies “fit the military agenda” already formulated by the Pentagon in consultation with NATO and Her Majesty’s Government.
US-NATO requires “evidence” to build a political consensus at the Wales NATO Summit on September 4-5 hosted by Britain’s Prime Minister David Cameron. According to PM David Cameron in a letter addressed to heads of State and heads of government of NATO member states ahead of the Summit:

“Leaders [of NATO countries] must review NATO’s long term relationship with Russia at the summit in response to Russia’s illegal actions in Ukraine.

“And the PM wants to use the summit to agree on how NATO will sustain a robust presence in Eastern Europe in the coming months to provide reassurance to allies there, building on work already underway in NATO.” (See PM writes to NATO leaders ahead of NATO Summit Wales 2014)
A pretext for an all out war on Russia under a humanitarian cloak?  The West coming to the rescue of civilians in Eastern Ukraine?
In late July in consultation with the Pentagon, NATO’s Europe commander General Philip Breedlove had (ahead of  the Wales NATO meeting) already called for “stockpiling a base in Poland with enough weapons, ammunition and other supplies to support a rapid deployment of thousands of troops against Russia”.(RT, July 24, 2014). According to General Breedlove, NATO needs “pre-positioned supplies, pre-positioned capabilities and a basing area ready to rapidly accept follow-on forces”:

“He plans to recommend placing supplies — weapons, ammunition and ration packs — at the headquarters to enable a sudden influx of thousands of Nato troops” (Times, August 22, 2014, emphasis added)

Breedlove’s “Blitzkrieg scenario” which could escalate into a World War III scenario is part of NATO’s summit agenda in Wales next week. In substance it is a “copy and paste” of the draftRussian Aggression Prevention Act (RAPA) (in the US Senate) which directs President Obama to initiate the militarization of Eastern Europe with a view to confronting Russia.
The Convoy of Russian Tanks. Where is It?
In support of NATO’s planned deployments to Eastern Europe, the Western media is claiming without evidence that a large convoy of Russian tanks has crossed the border into Ukraine and are operating under Russian command inside Ukraine.
The satellite images released by NATO show tanks and vehicles inside Ukraine, within an area controlled by Donbass forces. Where did they come from?
Ironically, these images are not from advanced US-NATO military satellite sources, they are from a digital commercial company operating on the internet. www.DigitalGlobe.com “a leading global provider of high-resolution earth imagery”.
While the Atlantic Alliance has access to advanced military and intelligence imagery, it takes the trouble of identyfing its source:  [Image #1 provided by Digital Globe] While media reports (with extensive photographic evidence). confirmed the  entry into Ukraine of  a convoy of Russian “white vans” which were part of Russia’s humanitarian initiative, nobody actually saw the tanks entering Ukraine.
With regard to the NATO satellite images, there is no indication as to where these tanks and armored vehicles came from and whether they were operated by the Russian military.
The Daily Mail online featured an unconvincing 20 second video of an alleged Russian tank inside Ukraine (see still image above). Spinning a Russian Invasion
This is not the first time that the media is spinning a “Russian Invasion”.  Earlier reports in June alluded to State Department sources that:

“three aging Russian T-64 tanks had been sent to Ukraine,” and that the Ukrainian government was claiming that there were 10 more tanks. The Times also noted:
Adding to Western concerns, the senior Obama administration official said, artillery has been moved to a deployment site inside southwest Russia and may soon be shipped across the border.
Not only are the anonymous claims of one official the source of the information–they also provide the analysis of that information, floating a slightly-too-perfect theory that Russia is handing over old equipment in order to make it seem like they’re not actually doing so (Peter Hart, Ukraine Tips From Nameless US Officials: Good Enough for the New York Times,  Global Research, June 27, 2014,http://www.globalresearch.ca/ukraine-tips-from-nameless-us-officials-good-enough-for-the-new-york-times/5388916

It should be noted that this as well as previous “Russian invasions” have been the object of sizable speculative gains on financial markets.
Where are the alleged Russian Tanks?
While various explanations are put forth concerning the alleged Russian tanks and armored vehicles, what is never mentioned in Western media reports is that the Donbass militia do not need Russian tanks.
According to the NATO communique:

Yet the evidence confirms that in  the course of the last two months, the Donbass militia have acquired a significant arsenal of tanks and armored vehicles captured from Ukrainian forces. 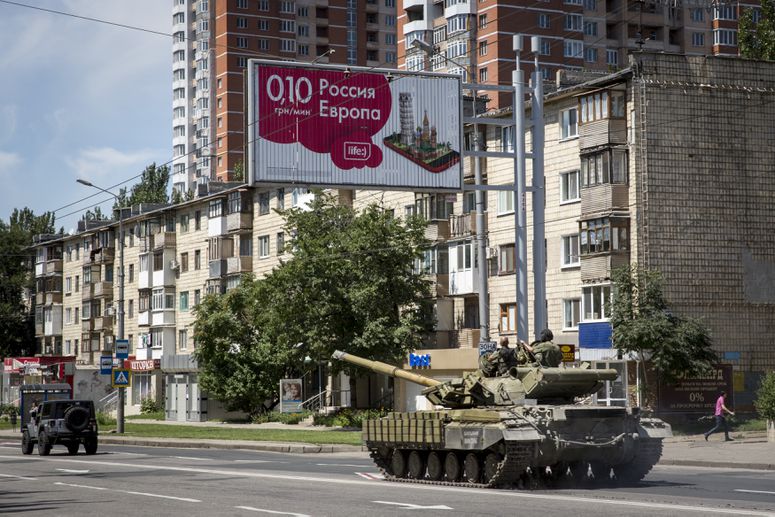 Rebels operate a tank in eastern Ukraine (Rob Stothard/Getty Images)
http://www.vox.com/2014/8/15/6006281/russia-ukraine-war-what-we-know
The large loss of military equipment is confirmed by the Ukraine Ministry of Internal Affairs, either destroyed or captured by Donbass forces.
Official Ukraine sources acknowledge a significant loss of  tanks and armored vehicles.
Based solely on a two week period in July, 35 Ukraine Army tanks and 96 Armoured Battle Vehicles were either confiscated or destroyed by Donetsk and Lugansk forces, according to an official brief  signed by Arsen Avakov (Minister of Internal Affairs) and V. Gritsak (Head of ATO [Anti-Terrorism Operation])
While the above figures do not distinguish between  confiscated and destroyed military equipment,Cyberberkut, provides the following data based on leaked official information.
According to Cyberberkut: some 65 tanks and 69 armoured battle vehicles and other military hardware (See list below) were captured by the Donbass militia over a period of less than 2 months (from June 20 to August 15).
tanks T-64 – 65 units;
infantry fighting vehicles (BMP) – 69 units;
armored personnel carriers (BTR) – 39 units;
combat reconnaissance patrol vehicles (BRDM) – 2 units;
airborne combat vehicles (BMD) – 9 units;
multiple artillery rocket systems (RSZO)  BM27 Uragan – 2 units;
self-propelled guns (SAU) 2S4 “Tyulpan” – 2 units;
self-propelled guns (SAU) 2S9 “Nona” – 6 units;
self-propelled guns (SAU) 2S1 “Gvozdika” – 25 units;
howitzers D-30 – 10 units; 82 mm. caliber mortars – 32 units;
anti-aircraft mounts ZU-23-2 – 18 units; wheeled vehicles – 124 units.
While we are not in a position to fully corroborate the Cyberberkut report (based on leaked official documents), the figures collected over the period of June 20 to August 15 are broadly consistent with the official release.
What these two sets of figures confirm is that rebel forces in Donesk and Lugansk possess a significant military arsenal and this arsenal did not originate  from Russia.  It was captured from Ukraine forces as confirmed by official Ukraine sources.
This information is of crucial significance because it refutes the accusations by Washington and NATO that the tanks and armored vehicles identified in Donbass came from Russia. With the exception of some 1000 Russian volunteers under Donbass military command, there is no evidence of Russian forces inside Ukraine.
Moreover, it should be noted that entire Ukrainian battalions have surrendered to the Donetsk and Lugansk militia; a large number of Ukrainian soldiers who have abandoned the battlefield have fled to Russia or have joined the Donbass militia:

“The 72nd Brigade for all intents and purposes has ceased to exist [in early August] due to ammunition and food rations running out. They held on while they still had resources and then began to exit into the territory of the Russian Federation – at first in separate groups, followed by the surviving remnants of the once full-fledged brigade.
The hardware was all abandoned at their positions, which continue to be controlled by Junta troops that have not yet surrendered. When militiamen would drive up on tanks as close as 400 metres away from the positions of the Junta, there was no return fire – there is simply nothing to fire back with. Some of the soldiers of the 72ndBrigade had no rounds left during the surrender; others had 1-2 magazines per automatic rifle. (Entire Ukraine Military Brigade Abandons the Battlefield and Surrenders to Donbass Militia, The Surrender of the 72nd Brigade, Global Research, August 4, 2014)

More generally, the Western media has failed to cover the war theater in Donbass. More than 2000 civilians have been killed as a result of shelling and bombing by Kiev forces, close to a million Ukrainians are refugees in Russia.
The humanitarian crisis is invariably not mentioned by the media and when it is, the blame is placed on Russia.

War in the Caucasus: Towards a Broader Russia-US Military Confrontation?During the night of August 7, coinciding with the opening ceremony of the Beijing Olympics, Georgia's president Saakashvili ordered an all-out military attack on Tskhinvali, the capital of South Ossetia. The aerial bombardments and ground attacks were largely directed ...

US threatens Russia as Ukraine Crisis EscalatesUS President Barack Obama and Secretary of State John Kerry issued bellicose statements directed against Russia on Tuesday, one week after a right-wing putsch backed by the US and the European powers brought down the Ukrainian government.Responding to Russian ...

The Obama Game: Is Putin Being Lured Into a Trap?“Russia … is now recognized as the center of the global ‘mutiny’ against global dictatorship of the US and EU. Its generally peaceful.. approach is in direct contrast to brutal and destabilizing methods used by the US and EU…. ...