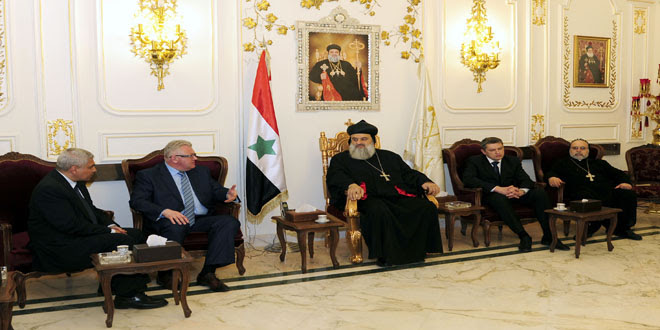 18 February، 2016
Damascus, SANA – Syriac Orthodox Patriarch of Antioch and All East Mar Ignatius Aphram II stressed that the Syrian people will remainsteadfast and united around the Syrian Arab army and leadership till achieving victory.
Patriarch Apham II, meeting the First Secretary of the Central Committee of the Communist Party of Belarus Karpenko Igor Vasilievic at St George’s Cathedral in Damascus Wednesday, said that Syria’s Muslims and Christians are committed to their homeland and determined todefend it against all threats and conspiracies, noting that Syria is fighting a war to preserve humanity and civilization on behalf of the entireworld.
Throughout the years, Syria has maintained its reputation in the region and the Islamic world as a country of moderate mentality and an example of peaceful Christian-Muslim coexistence, he added.
Patriarch Aphram II pointed out that Syria renounces all extremist acts committed under the pretext of religion, expressing hope that thesetemporary acts will come to an end paving the way to build modern Syria. 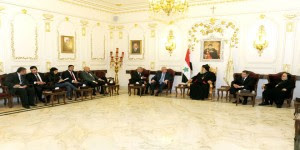 Vasilievic, for his part, expressed astonishment at support provided by some countries which claim to be civilized nations to the extremist terrorism.
He added that the delegation’s visit to Syria is meant to express solidarity with the Syrian people and their leadership against the Western-backed terrorism inflicted upon the country.
R. Raslan/ Barry
Posted by eirenae at 11:47 AM