Iran supports Syria’s decision about the destruction of its chemical weapons arsenals.

After the British Foreign Secretary William Hague has signalled the support of the UK administration for Russias proposal to put the chemical weapons arsenals on Syrian soil under an international control by the United Nations (UN), although William Hague has lied again in his speech at the British House of Commons in regards of the Russian chemical weapons plan for Syria, it is really no surprise that Iran has repeated its support for the initiative by Moscow in terms of Syria’s chemical weapons stockpiles.
Further, Iran’s President Hassan Rouhani has underlined in a new statement that the Iranian administration in Tehran supports the decision by the Syrian government of President Bashar al-Assad in Damascus to join the international convention on the prohibition of chemical weapons.
The President of the Islamic Republic of Iran, Hassan Rouhani, made his new statements in a speech at the Shanghai Cooperation Organization (SCO) summit on Friday. Iran’s President also pointed out in his speech in regards of the Syrian conflict and Russia’s initiative to place the chemical weapons of Syria under an international control that any use of force in Syria “must be neutralized.”
Of course, it is to hope that the conflict in Syria will soon come to an end and that the units of the Syrian Arab Army (SAA) are able to crush all foreign-backed terrorists and Al-Qaeda-affiliated jihadist groups soon, and to restore security and safety in entire Syria again.
However, it is probably more a dream than it might be the situation that the conflict and battles on Syrian soil will end soon. It is to fear that the conflict and crisis will last longer that many are able to accept. Not to mention that even in case the foreign-backed terrorists and al-Qaeda-linked Islamist forces are crushed and eliminated by the units of the Syrian Army, this does not mean a complete end to the terrorism in the Arab country. Terrorism and violence will now be present in Syria for many years.
While the Iranian President Hassan Rouhani also mentioned the nuclear energy program of Tehran in his speech at the Shanghai Cooperation Organization (SCO) summit on Friday, there is till now no more information available about further remarks by the President of the Islamic Republic of Iran in regards of the proposal by Russia and the intentions by the Syrian governance and President al-Assad to join the international convention on the prohibition of chemical weapons. In terms of the Iranian nuclear energy program, Iran’s president said in his speech on Friday that the administration in Tehran remains committed to the nuclear Non-Proliferation Treaty (NPT).

Bashar al-Assad
Rossiya-24:
Some American media reported that alleged your officers – so officers of the Syrian Arab Army – have asked you for the approval to use chemical weapons in the fight against the armed opposition gangs. You, Mr. President, are said to have denied this permission. Nonetheless, these officers are said to have used chemical weapons on their own, especially in East Ghouta. Is this representation correct, are such operations even possible in Syria?
Bashar al-Assad:
This is nothing but a facet of American propaganda. Such propaganda always uses all kinds of lies to justify their own wars. This alleged conversation is reminiscent of what Colin Powell, under the lead of George Bush Jr., has done to justify the war against Iraq a little more than 10 years ago.
They brought evidence and have claimed that it would confirm that Saddam Hussein produces weapons of mass destruction. It later turned out that it was a lie. Today they lie in different ways, a variant is the one you have just mentioned.
The truth is, however, that such a conversation between anyone in Syria could have never taken place. This type of weapons is centrally managed (administered) in different countries and armies of the world – there are no such weapons directly in the hands of the armed forces – in other words, there are no regular troops that carry along such type of weapons – neither the land forces, nor the armoured divisions or others. It is a special type of weapons that would be used by Special Forces. So this is a completely illogical lie that no one can really believe.
Rossiya-24:
Recently, evidence were presented to the U.S. Congress, which were described as “convincing” and “indubitably” – video recordings, which should imply that the chemical weapons in the Damascus suburb of East Ghouta had been used by the Syrian Army. What can you say about this American version?
Bashar al-Assad:
They have neither the Congress nor the press and therefore not their own people even shown one single evidence, as well as not to other country in the world, not even Russia, which has participated in the negotiation process. Everything that has happened, were nothing but words, and even that is a facet of American propaganda.
The logic, however, says that one cannot use weapons of mass destruction only hundreds of meters away from its own armed forces. One cannot use weapons of mass destruction in places of residence, because this would lead to tens of thousands of victims.
Similarly, weapons of mass destruction are not used in the time of (military) advances or if the success will not fail even with ordinary types of weapons. Their logic is not convincing. Therefore, the U.S. leadership is currently in a difficult position. They lie a lot less professional than it was yet done by the George Bush administration.
The previous U.S. administration has lied, but in their lies, they knew how they could convince a part of the world of their lies – in contrast to the current U.S. government, which is not even able to convince its allies about their lies. All the talk has no meaning. It lacks any logic and is completely implausible.
Rossiya-24:
The last question I just have to ask, since it concerns the security of the entire region. Russian media has recently reported that the armed opposition gangs possibly plan another provocation in which they could use chemical weapons against Israel, namely from a territory controlled by the Syrian Arab Army. Have you such an information in your capacity as commander in chief?
Bashar al-Assad:
It was already confirmed that the terrorist groups have chemical weapons and they have already been applied in Syria against our soldiers and civilians. So there are these substances. Furthermore, we know that these terrorist gangs and those, by which they are controlled, want to provoke a military attack by the United States.
Previously, they have tried to implicate Israel in the Syrian crisis. It cannot be ruled out that this information are true and are intended to serve the mentioned objectives.
If there is war in a region, so the chaos is increasing, but when the chaos is increasing, it is essential that the territories for terrorist gangs become more permeable and thus they can cause more damage and destruction. Such threats are a real challenge, because the terrorists have chemical weapons, and there are countries that supply them with these agents.
Rossiya-24:
Thank you for answering our questions!
Source: apxwn
Posted by eirenae at 11:43 PM No comments:

The turn of events was to great extent unexpected. The Russia’s chemical weapons initiative and its following support by Damascus could be a real breakthrough on the way of finding a solution to the drawn-out bloody conflict, no matter there are a lot of problems and colliding interests making the issue so complex. END_OF_DOCUMENT_TOKEN_TO_BE_REPLACED
Posted by eirenae at 12:52 AM No comments: 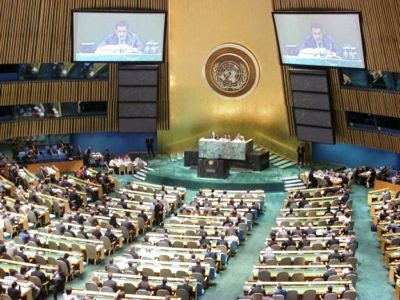