Posted by eirenae at 2:13 PM No comments: 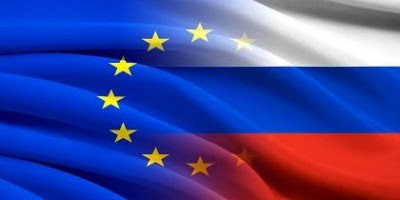 A couple of weeks ago a group of influencial German figures, the members of Willy Brandt Circle, have signed an Open Letter to SPD (German Social-Democrats) Bundestag delegates and cabinet ministers urging them to abandon the confrontational course in relations with Russia. The authors reviewed the degrading EU-Russia ties in the context of Ukraine’s crisis which was the direct result of mutual misunderstandings and controversies. Hereby ORIENTAL REVIEW publishes an exclusive English translation of the Letter in full:
***
Europe is experiencing the worst crisis since the end of the East-West conflict. Not only dealing with Greece and the thousands of refugees heighten tenses across the continent, but also the ceasefire negotiation process in Ukraine remains fragile. As long as the conflict over the future of Ukraine is unsolved, the real danger of escalation is on the table.
A comprehensive peace treaty for Europe, envisioned by the Charter of Paris 1990, is still needed. Europe has no interest in aggravating old controversy between the United States and the USSR, bringing Russia to its knees. There is a difference between the European and the American interests: pan-European problems cannot be solved without Russia or even against Russia. Recent history shows: Russia and the peoples of the Soviet Union contributed more than anyone to the liberation of Europe from fascism and later to the unification of Germany. Therefore, Germany has a special responsibility to win Russia as a negotiating partner in the European peace order.
In 1990 it seemed that the answer to these questions is found once and for all: Russia became a co-architect of the European integration. Russia, alongside with the USA, would naturally become an anchor and an equal partner. Since then Russia’s expectations have been deeply disappointed: EU and, what’s more important, NATO enlargement policy totally excluded the possibility of Russia’s membership. It was too difficult, as the country was too big. Moreover, some Eastern European states claimed that their quick accession to NATO membership was a military precaution against Russia. Having no perspective to join NATO itself, more and more patriotic Russia sees the expansion of the structures of the Western alliance as a threat. NATO expansion nourished Russia’s old fear of being surrounded and it was gradually forced to thinking in geopolitical categories and zones of influence.
The Ukrainian crisis is a reflection of a major conflict between Russia and the Euro-Atlantic structures. It may lead to a catastrophe if the ongoing arms race, military provocations and confrontational rhetoric is not stopped. We strongly appeal to all responsible politicians and peace-loving citizens but first and foremost directly to the SPD:
In this situation bold political initiative is needed comparable to the initiatives that helped to stop the conflict spiral during Berlin Wall and Cuban Missile Crisis. It was German social democracy that paved the way to the new Willy Brandt’s Ostpolitik and the détente. In 2015 we require such courage and political wisdom to counter the threat of renewed confrontation and division of Europe. We call to stop the confrontation and restart our relations with Russia before it is too late for all of us.
Europe needs Russia and Russia needs Europe. We stand at a tipping point. Either we enter a more or less Cold war with dim future or pave the way together the new common European peace order.
Now is the time to act!
Berlin, July, 21, 2015
Signers: 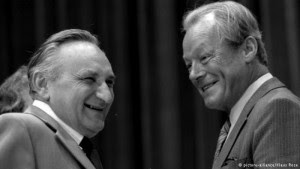 Egon Bahr and Willy Brandt
Prof. Egon Bahr was the creator of the “Ostpolitik” promoted by West German Chancellor Willy Brandt, for whom he served as Secretary of the Prime Minister’s Office from 1969 until 1972. Between 1972 and 1990 he was an MP in the Bundestag.
Prof. Dr. Walther Stützle was the Deputy Minister of Defense in 1998-2002.
Dr. Christoph Zöpel is the SPD politician, Foreign Minister in 1999-2002.
Prof. Dr. Ingomar Hauchler, Bundestag MP (SPD) from 1983 to 1998.
Antje Vollmer, is a member of the German Green Party. From 1994 to 2005, she was one of the vice presidents of the Bundestag.
Prof. Dr. Dieter Klein is the Head of the Commission on the Future of the Rosa Luxembourg Foundation and a member of its Board.
Prof. Dr. Gustav Horn is the Professor of Economics at the University of Flensburg, Scientific Director of the Institute of Macroeconomic Research in the Hans Böckler Foundation.
Dr. Rainer Land is the German social scientist and economist.
Prof. Dr. Götz Neuneck is the Deputy Director of the Institute for Peace Research and Security Policy at the University of Hamburg (IFSH) and Director of the Interdisciplinary Research Group Arms Control and Disarmament (IFAR).
Prof. Dr. Rolf Reissig is a member of the Scientific Advisory Board of the Rosa Luxembourg Foundation.
Prof. Dr. Elmar Brähler, was the Professor of Medical Psychology and Medical Sociology at the University of Leipzig.
Prof. Dr. Peter Brandt is the German historian and retired Professor for Modern and Contemporary History at the University of Hagen.
Prof. Dr. Michael Schneider is the German political journalist and literary critic.
Prof. Klaus Staeck is a German lawyer and publisher.
Dr. Friedrich Dieckmann is the author of essays, reviews, stories and radio features.
Prof. Dr. Hans-Joachim Gießmann is the Executive Director of Berghof Foundation.
Prof. Dr. Lutz Götze, Professor Emeritus of the University of Saarland.
Dr. Enrico Heitzer, Researcher of the Brandenburg Memorials Foundation.
Gunter Hofmann is the German journalist working for Die Zeit.
Dr. Hans Misselwitz is a functionary of the SPD and a founding member of the Institute Solidarity modernity.
Dr. Irina Mohr is the leader of Forum Berlin of the Friedrich Ebert Foundation.
Dr. Edelbert Richter is a Member of the European Parliament in 1991-1994, German Bundestag MP in 1994-2002, member of the Federation of German Scientists.
Dr. Friedrich Schorlemmer, is a German Protestant theologian, civil rights activist and member of the SPD.
Wolfgang Schmidt is the Hamburg Commissioner to the Federal Government, the European Union and of Foreign Affairs; Member of the Committee of the Regions.
Axel Schmidt-Gödelitz is the Chairman of the East-West Forum.
Volker Braun is the prominent German writer living in Berlin.
Daniela Dahn is the writer, journalist and essayist.
Ingo Schulze is a German writer from Dresden.

Comment on Global Research Articles on our Facebook page
Become a Member of Global Research
Source:http://www.globalresearch.ca/europe-needs-russia-and-russia-needs-europe-influencial-german-figures-call-for-a-new-european-approach-to-the-crisis-in-ukraine/5467287
Posted by eirenae at 1:45 PM No comments: