STATEMENT BY THE FOREIGN MINISTRY OF RUSSIA
August 11, 2016
Russia’s Federal Security Service (FSB) has disrupted a plot to carry out terrorist attacks in the Republic of Crimea. The attacks, planned by the Ukrainian Defence Ministry’s Chief Intelligence Directorate, targeted critical infrastructure and facilities in Crimea. Russia’s intelligence services take the view that these planned acts of sabotage and terrorism were intended to destabilise the socio-political situation in the region in the run-up to federal and regional elections.A group of saboteurs were apprehended near the town of Armyansk on the night of August 6. An FSB officer was shot and killed in the process of apprehending the terrorists. Explosive devices with a total charge of more than 40 kilograms of TNT, munitions, grenades, land mines and other weapons were found at the scene. Ukrainian Defence Ministry special units made two further attempts to infiltrate Crimean territory in the early hours of August 8, but the groups of saboteurs and terrorists were intercepted by the FSB and other Russian forces. These attempts to infiltrate Crimea took place under cover from armoured equipment and massive fire by Ukrainian armed forces from inside Ukrainian territory. One Russian Defence Ministry serviceman was killed as a result.

Russia has now taken action to dismantle the Ukrainian Defence Ministry Chief Intelligence Directorate’s network of agents in Crimea and have detained Ukrainian and Russian citizens who aided in the preparation of these terrorist attacks. The detained individuals include Yevgeny Panov and Andrey Zakhtey. All of them have admitted their involvement and are giving a confession.
We have repeatedly brought to our partners’ attention that the current authorities in Kiev have no real interest in searching for a peaceful solution to the problems in Ukraine, are not ready to compromise, and intend to resolve issues that arise through the use of force, including terrorism now.
The attempts to enter Crimea unlawfully, the recent attempt on the life of Head of the Lugansk People’s Republic Igor Plotnitsky, the constant firing along the line of contact in Donbass, and the actions of radical nationalists and so-called ‘activists’ from around Ukraine that go beyond the bounds of any lawful framework are a vivid illustration of the state of affairs in Ukraine today. The numerous provocations, efforts to portray Moscow as the enemy, and the deliberate cultivation of anti-Russian sentiments are an attempt by the Ukrainian government to distract the public from the country’s own troubles and the problems affecting the majority of people in Ukraine. We see a deliberate effort to divert public attention from the actions and responsibility of those in power and their inability to carry out long overdue reforms and conduct an honest investigation into the murders of journalists and human rights activists and the crimes committed in 2014 during the Maidan protests, in Odessa, Mariupol, and other cities.
Ukraine’s government makes loud declarations in a bid to deny what is evident and pass responsibility for its own actions to others, even the UN Security Council – anything to avoid taking meaningful steps to normalise the situation.
We call on our partners, whose efforts play a large part in keeping the current regime in Kiev in power, to show common sense and finally get their Ukrainian wards to end their constant provocations and fulfil their obligations in accordance with Minsk Agreements on a political settlement in Ukraine.
Mr Poroshenko constantly touts the “unconditional support from the USA, NATO, and the European Union” in his “fight to return annexed Crimea”. The West’s willingness to play along with this rhetoric undoubtedly played a role in the Ukrainian leadership’s criminal decision to attempt an armed provocation in Russian Crimea. If the commander in chief of Ukraine’s armed forces was involved in these decisions, he will have driven the final nail in the coffin of the peace process. If these decisions were taken without his knowing, then it is even worse. Kiev’s inaction in the face of growing militaristic rhetoric and violent acts planned and executed by so-called volunteer battalions and other extremists is cause for grave concern.
We hope that Western capitals will draw the appropriate conclusions.
Attempts to destabilise the situation in Russian Crimea are doomed to fail. Russia unconditionally guarantees Crimea’s stability and security.
Kiev and its foreign backers should know that any harm to Russia or the deaths of Russian personnel will not go unanswered.
As President Vladimir Putin noted on August 10, given the current situation and until we see real positive steps from Kiev, like renouncing terror and provocations, it makes little sense to hold Normandy format meetings, like the Beijing meeting in early September requested by Mr Poroshenko recently.
Once again, we call on our partners to use their influence with Kiev to dissuade the government from taking any dangerous steps that could have grave consequences. Playing with fire is dangerous.

The Essential Saker: from the trenches of the emerging multipolar world
$27.95
More offers  source:http://thesaker.is/statement-by-the-foreign-ministry-of-russia-on-terror-attacks-in-crimea/
Posted by eirenae at 8:01 AM No comments:

U.S. military whistleblowers will present this petition in Berlin to a German government that includes
members already very much concerned about the giant U.S. Air Base at Ramstein.
Ramstein is not just any base. It is the communications center for the drone wars. It is a main entry and return point for U.S. troops in Middle Eastern wars. It is home to the Air Force component of Africom and the headquarters of the Air Force in Europe. U.S. wars depend on Ramstein, and we should shut it down.

The first step is to sign the petition at this link. 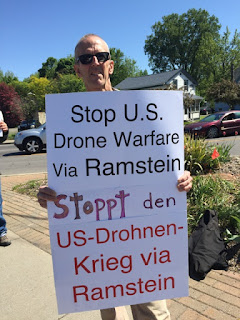 Sahra Wagenknecht, co-chair of Germany's Left Party, told RootsAction co-founder Norman Solomon, as quoted in his new article in The Nation, "These extrajudicial killings are war crimes, and the German government should draw the consequences and close down the air base in Ramstein…. In my view, the drone war is a form of state terrorism, which is going to produce thousands of new terrorists."

Click here to add your name to the petition.
The petition -- addressed to Chancellor Merkel, President Obama, the German Bundestag, and the U.S. Congress -- will be delivered in Berlin at a presentation sponsored by RootsAction. The petition will also be presented to the U.S. government in Washington.
Please sign the global petition to close the Ramstein Air Base -- a vital step toward moving the world away from nonstop war.
Partners in this effort: Campaign for the Accountability of American Bases, Code Pink, Coop Anti-War Cafe Berlin, Danish Peace Academy, Gandhi Earth Keepers, Global Network Against Weapons & Nuclear Power in Space, National Campaign for Nonviolent Resistance, Peace Action New York State, RootsAction.org, Syracuse Peace Council, United National Antiwar Coalition, Upstate Coalition to Ground the Drones and End the Wars, Voices for Creative Nonviolence, War Criminals Watch, Western New York Peace Center, WILPF-US, Women Against Military Madness, Women Against War, World Beyond War, World Can't Wait, Clearing Barrel Coffee House.
After signing the petition, please use the tools on the next webpage to share it with your friends.
This work is only possible with your financial support. Please chip in $3 now.
-- The RootsAction.org Team
P.S. RootsAction is an independent online force endorsed by Jim Hightower, Barbara Ehrenreich, Cornel West, Daniel Ellsberg, Glenn Greenwald, Naomi Klein, Bill Fletcher Jr., Laura Flanders, former U.S. Senator James Abourezk, Coleen Rowley, Frances Fox Piven, Lila Garrett, Phil Donahue, Sonali Kolhatkar, and many others.
Background:
>  Norman Solomon, The Nation: “The Most Important U.S. Air Force Base You've Never Heard Of”
>  Jeremy Scahill, The Intercept: “Germany Is the Tell-Tale Heart of America’s Drone War”
Posted by eirenae at 6:39 AM No comments:

What will be Turkey's toll for a second chance with Russia?

FEHIM TAŞTEKIN
Columnist
Fehim Taştekin is a Turkish journalist and a columnist for Turkey Pulse who previously wrote for Turkish newspaper Radikal. He is the host of a weekly program called "SINIRSIZ" on IMC TV. He is an analyst specializing in Turkish foreign policy, and Caucasus, Middle East and EU affairs. He contributes to Al-Monitor's Turkey Pulse as a columnist. He is the author of “Suriye: Yıkıl Git, Diren Kal” and was the founding editor of Agency Caucasus. On Twitter: @fehimtastekin

Will KRG be next target of Turkey's Gulenist purge?

How Turkey is reforming its military

Osama Al Sharif
Read more: http://www.al-monitor.com/pulse/originals/2016/08/turkey-russia-second-spring-what-will-be-the-toll.html#ixzz4H70j78G1http://www.al-monitor.com/pulse/originals/2016/08/turkey-russia-second-spring-what-will-be-the-toll.html
Posted by eirenae at 3:20 AM No comments: