The world upside down. The Age of Enlightenment has never happened. War is Peace.


Truth always remains truth, and a lie remains what it is, namely a lie, and only he who is of God hears God's Words (Jn. 8:47).


If you tell a big enough lie for a long enough period, the lie will become the "truth".

November 11, 2012
JERUSALEM (JTA) -- Israel came under attack from Gaza rocket fire.
At least 50 rockets fired from Gaza have struck Israel since Saturday night, according to the military and Israeli news reports. A factory in Sderot sustained a direct hit Sunday morning and several buildings and two cars in the Sha'ar Hanegev municipality were also damaged in attacks. At least three Israelis have been wounded.
The terrorist group Islamic Jihad has claimed responsibility for the bombardment. The Palestinian Maan news agency reported that Islamic Jihad said it shot more than 70 rockets at Israel between Saturday night and Sunday morning.

Maan reported that at least six Palestinians have been killed in Israeli retaliation on what the Israel Defense Forces said were weapon manufacturing facilities, weapon storage facilities and rocket launching sites.

The Iron Dome anti-missile system intercepted a rocket heading for the major Israeli city of Ashdod on Saturday.
Schools throughout southern Israel were closed on Sunday.
"The IDF is striking and will continue to strike Gaza. Terrorist organizations are suffering grave setbacks at the hands of the IDF. The world must understand that Israel will not sit with its hands crossed," Israel's Prime Minister Benjamin Netanyahu said Sunday at the start of the weekly Cabinet meeting.
On Saturday, four Israeli soldiers were injured when an anti-tank missile hit on IDF jeep patrolling the security fence in the northern Gaza Strip.
The IDF responded Saturday night by targeting several of what it called "terror activity sites" in Gaza, leaving four Palestinians dead and dozens wounded. The rocket attacks and Israeli retaliation continued on Sunday morning, killing two more Palestinian Gazans.


Could the Syrian government be mad enough to open another front? 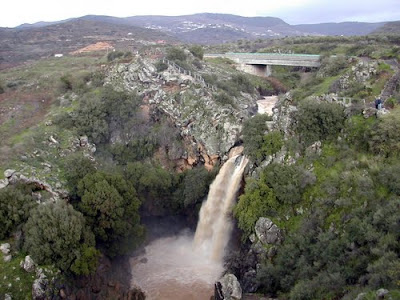 It's been nearly 40 years since the last time Israel fired a shot into the Syrian side of the Golan Heights. Until today.


"In the midst of Syrian infighting, a mortar shell fired by the Syrian army struck near an outpost at Tel Hazeka," IDF spokesman Brig.-Gen. Yoav Mordechai said. The shell failed to cause injuries or damages.

"In light of the policy instituted by IDF Chief of Staff, Lt.-Gen. Benny Gantz, a warning round was fired back into Syria. We don't believe it caused injuries or damages," Mordechai added.
At the same time, Israel sent a warning message to the UN, saying that any further firing into Israel will result "in a real response," sources added.

Israel limited its return fire, since its policy is to only fire intensively in response to coming under major Syrian fire. "We didn't continue firing because this was one mortar we were responding to," the source said.

"We will not accept any firing into our territory," he added. "This was a signal to the Syrians, that we will not be so forgiving of everything that lands in a territory." The source stressed that as of now, Israel and Syria were not a in a conflict situation.

The IDF is currently on standby for a security deterioration on both the northern front and the border with Gaza.

I'm not sure our government gets it. Assad doesn't care whether errant shells fall in Israel. He trusts that we won't go to war over them, and he's willing to take some casualties over them if he has to due to our limited responses. All he cares about is his own survival.
Posted by eirenae at 9:34 AM No comments: