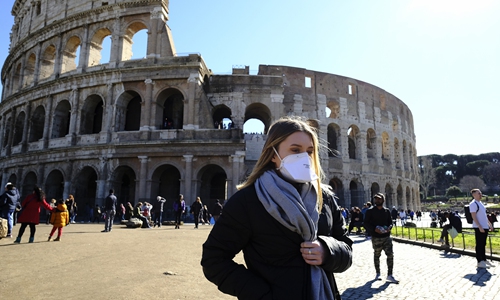 Tourist wearing a protective mask tours outside the Colosseum in downtown Rome on Friday amid fear of COVID-19 epidemic. Photo: AFP 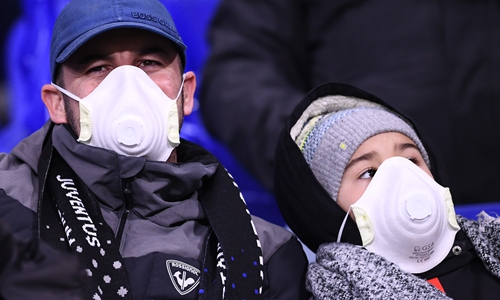 
The novel coronavirus is spreading rapidly in Europe. As of Saturday, the total number of confirmed cases in Italy reached 1,128, with the death toll rising to 29. And the number of infections in France and Germany has also been increasing. France reported a total 100 confirmed cases Saturday while Germany reported 117 Sunday. Worsening situation in these two major EU countries raises concerns over the fall of Europe as a whole.

The first death confirmed in the US also signaled the severity of the situation. COVID-19 has increasingly dominated trending topics in the US and Europe. More national and local governments have canceled major events and closed schools and kindergartens. Tensions are growing.

Government officials and media outlets in various countries and regions have constantly stated that as their societies differ from China, they could not possibly adopt China's measures to fight the epidemic and have to take their own steps.

However, there are significant trends.

First, the public's fear of COVID-19 in many countries is increasing, which may lead to changes in the epidemic situation and influence certain conventional decisions. Keeping people calm and rational while curbing the epidemic will test all countries and regions.

Second, economic losses resulting from the epidemic are hard to avoid. All countries must be prepared for much greater financial losses than having anticipated. At this stage, it is worthless to focus much on accurate GDP data. In the short term, more countries are likely to prioritize securing material supplies to ensure their societies can operate normally and also safeguarding an intact industrial supply chain.

Third, there is a great possibility that the epidemic will worsen and stretch global medical resources to the limit. Once an epidemic spreads rapidly in one place, it's likely to overwhelm the local medical system. The world must be prepared and get ready to provide assistance to regions greatly ravaged by the novel coronavirus.

Fourth, different countries have their own epidemic monitoring networks, which greatly increases the difficulty of improving the effectiveness of prevention and control worldwide and has made it more difficult to maintain the movement of people during the epidemic. Countries must reach a unified standard on prevention and control of those traveling across borders. Who needs to be quarantined or banned from international travel? How long will it last? The international community should reach a consensus. Should a health certificate from one country or region be accepted in another? To work out these issues would greatly help reduce the costs of fighting the epidemic.

For now it's just a slogan to call on the international community to jointly combat the virus. It would be a blessing for the international community if the epidemic could end within one or two months. But should the coronavirus not be annihilated and continue to spread during the coming winter, it will cause catastrophic damage to the world economy. We must explore a long-term mechanism to deal with this possibility. Otherwise, the price we all have to pay will multiply.
Posted in: EDITORIAL
Posted by eirenae at 12:03 AM No comments: