As explosions from detonated mines continued in the background a Syrian general confirmed in some detail an ugly truth: Washington and its close allies Turkey, Saudi Arabia, Qatar and Israel backed the ISIS takeover and destruction of Palmyra.
Most of the weapons ISIS used were from the US , with some ammunition from Israel . ISIS had US Hummers, spinning explosive projectiles and military rations from the US , Turkey and Saudi Arabia.
That should not have been a surprise. US officials admitted in 2014 that their allies Turkey , the Saudis and Qatar were backing every single armed group in Syria , in an attempt to overthrow the Syrian Government led by President Bashar al Assad.
Our group of 30 journalists visited liberated Palmyra on 14 April, 18 days after the Syrian Army freed the historic city from a ten month reign of terror. Syrian bulldozers were cleaning debris while Russian sappers continued exploding mines. Three thousand had been cleared and another 30 exploded in the two hours we were there. 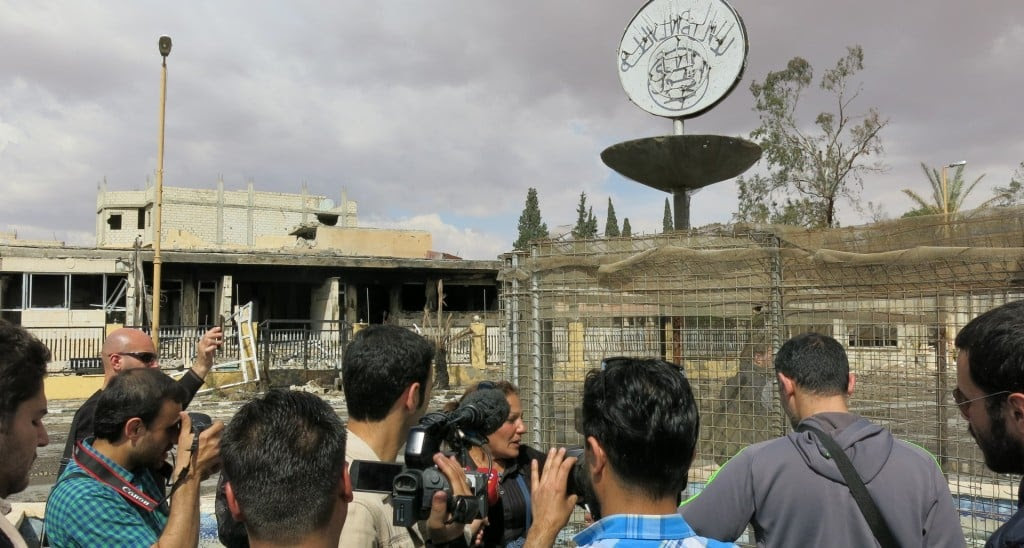 We saw the damaged buildings, bomb and mine craters along the roads, and the bizarre steel and wire structure where ‘infidels’ and pro-government people were publicly crucified and beheaded, their bodies drained of blood into what had been a pleasant fountain next to the entrance to the historic sites. We saw the extensive vandalism to the museum, with all human or animal statues beheaded or damaged.
More than 1,600 ISIS terrorists – many from Chechnya , Saudi Arabia , Tunisia and other countries, as well as some Syrians – had converged on Palmyra in May 2015, just as Jabhat al Nusra (al Qaeda in Syria ) led an invasion of NATO-backed Islamists from Turkey into Northern Syria . The ISIS groups invading Palmyra came from the east: from Raqqa, Deir eZorr and Abu Kamal, but also a group from the west.
The US, which since 2014 claimed to be conducting a war against ISIS in Iraq and Syria, and which had air power and sophisticated surveillance of the region, did nothing to stop the huge ISIS advance on Palmyra.
Again, this should have been unsurprising. Eight months earlier General Martin Dempsey, head of the US military, admitted that his ‘major Arab allies’ were funding ISIS . In response, Senator Lindsay Graham, chair of the US Armed Forces Committee, defended the sponsors of ISIS , saying ‘they fund them because the Free Syrian Army couldn’t fight Assad, they were trying to beat Assad’.
The following month, in October 2014, US Vice President Joe Biden explained that Turkey , Qatar , the UAE and Saudi Arabia ‘were so determined to take down Assad … they poured hundreds of millions of dollars and tens, thousands of tons of weapons into anyone who would fight against Assad … [including] al Nusra and al Qaeda and … this outfit called ISIL’. Biden pretended that Washington was not responsible for the terrorism of his subordinate allies.
US support for terrorist groups forming an ‘Islamic State’ was not an afterthought. It was they key idea from the beginning.
In August 2012, before ISIS came across to Syria from Iraq, US intelligence (DIA) reported that ‘The Salafist, the Muslim Brotherhood and AQI [al Qaeda in Iraq, later ISI and then ISIS] are the major forces driving the insurgency in Syria … there is the possibility of establishing a declared or undeclared Salafist principality [an ‘Islamic State’] in eastern Syria … and this is exactly what the supporting powers [the US, other western countries, the Gulf monarchies and Turkey] to the [Syrian] opposition want, in order to isolate the Syrian regime.’
More than 200 Syrian soldiers died defending Palmyra in May 2015, and another 150 died retaking that historic and strategic city, in March 2016.  They lost their lives defending their country.
The water supply in Palmyra was destroyed, historic sites and treasures damaged, and soldiers and many other innocents were slaughtered, all by US-backed terrorists.
Whatever else people may or may not understand about the Syrian conflict, they should be clear that the US ‘war on terrorism’ in Syria and Iraq is a fraud. Directly or indirectly, Washington remains the key supporter of ISIS, al Nusra and the rest.
Prof. Tim Anderson, Global Research source: http://www.strategic-culture.org/news/2016/04/17/how-america-backed-isis-takeover-and-destruction-palmyra.html
Posted by eirenae at 2:46 AM No comments: