The Polish Vote and Lockheed Martin: How Domestic US Politics Drove NATO Expansion

Meanwhile, a coterie of foreign-policy intellectuals on the payroll of the RAND Corporation, a think tank historically reliant on military contracts, had begun advancing the artful argument that expanding NATO eastward was actually a way of securing peace in Europe, and was in no way directed against Russia.
Chief among these pundits was the late Ron Asmus, who subsequently recalled a RAND workshop held in Warsaw, just months after the Wall fell, at which he and Dan Fried, a foreign-service officer deemed by colleagues to be “hard line” toward the Russians, and Eric Edelman, later a national-security adviser to Vice President Cheney, discussed the possibility of stationing American forces on Polish soil.
Eminent authorities weighed in with the reasonable objection that this would not go down well with the Russians, a view later succinctly summarized by George F. Kennan, the venerated architect of the “containment” strategy:


Expanding NATO would be the most fateful error of American policy in the post cold-war era. Such a decision may be expected to inflame the nationalistic, anti-Western and militaristic tendencies in Russian opinion; to have an adverse effect on the development of Russian democracy; to restore the atmosphere of the cold war to East-West relations, and to impel Russian foreign policy in directions decidedly not to our liking.

Thank God men cannot fly, and lay waste the sky as well as the earth. - Henry David Thoreau
Posted by eirenae at 11:22 PM No comments:

Foreign Troops in Ukraine? You Bet!

Posted by eirenae at 1:22 PM No comments:

Email ThisBlogThis!Share to TwitterShare to FacebookShare to Pinterest
Posted by eirenae at 1:10 PM No comments:

Russia to respond to possible disconnection from SWIFT - PM

Posted by eirenae at 1:09 PM No comments: 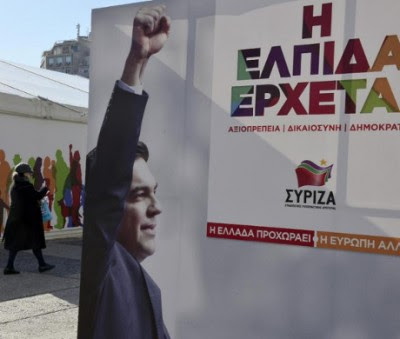 “Greece is turning a page,” he said. “It’s leaving behind five years of humiliation and misery.”
“We are putting together a government of social deliverance to carry out our program and negotiate with Europe.”
“The verdict of the Greek people ends, beyond any doubt, the vicious circle of austerity in our country.”

Tsipras promised to renegotiate Troika imposed mandates. With no intention of writing off its 320 billion euro debt, he says.
Exceeding 175% of Greek GDP. Europe’s highest. Second only to Japan worldwide. Impossible to repay.
“Debts that can’t be paid, won’t be,” economist Michael Hudson explains. Force-fed austerity makes repayment harder. So do new loans to service old ones.
Servicing debt gives bankers “a free lunch at the rest of the economy’s expense,” says Hudson.
How much relief SYRIZA intends remains to be seen. Its campaign slogan “Hope is coming” may turn out more hype than substantive change.
Tsipras said he’ll “negotiate with our lenders a mutually acceptable solution…There will be no conflict with partners.”
On January 23, the Financial Times headlined “Alexis Tsipras: Greece’s radical or realist?”
Critics call him “cynical and calculating,” said the FT. “(U)sing his charisma and boyish good looks to present a friendly face as he elbows his way to the top.”
Personal ambitions alone motivate him. His goal (now accomplished) is becoming prime minister.
His party predecessor chief, Alekos Alavonos, questions his intentions. Saying SYRIZA had “radical left origins…(It’s) now a moderate party.”
Tsipras calls himself “a compromiser because I want to have realistic goals.” At the same time saying “I’m very decisive if I know it’s necessary to have a fight.”
Party officials expect him to be sworn in as prime minister on Monday. With a new government in place this week.
He’ll be heavily pressured by Troika diktats to pay bankers first. At the same time facing popular demands to deliver what he promised.
Belgium’s finance minister explained what long-suffering Greeks face, saying:
“We can talk modalities. We can talk debt restructuring, but the cornerstone is that Greece must respect the rules of monetary union. That must stay as it is.”
In other words, what Brussels says goes. Germany’s central bank president Jens Weidmann expects the new government to continue what’s “already been achieved.”
Paying bankers at the expense of social justice. Tsipras claims Greece’s economy is “safe in SYRIZA’s hands.”
He plans a pathetic two billion euro welfare package. Claiming it’ll help impoverished Greeks.
How when tens of billions of euros are needed to reverse things. Not in Tsipras’ playbook.
Expect largely business as usual wrapped in populist rhetoric ahead. SYRIZA’s challenge is an empty treasury, said the Wall Street Journal.
It needs billions of euros in financial aid. Not forthcoming without paying bankers first.
According to Oxford Economics global research head Gabriel Sterne, agreement by both sides appears “extraordinarily difficult. Someone has to blink quickly.”
Bet on Athens, not Brussels. Greece must continue serving debt, EU officials say.
Nor will any portion be written off, according to ECB executive board member Benoit Coeure.

“Mr. Tsipras must pay,” he said. “Those are the rules of the game. There is no room for unilateral behavior in Europe.”
“That doesn’t rule out a rescheduling of the debt,” Coeure said. “If he doesn’t pay, it’s a default, and it’s a violation of the European rules.”

Greece received 240 billion euros in bailout funding. Bankers demand their pounds of flesh in return.
Tsipras appears ready to oblige them. Promising one thing. Doing another. Expect no Grexit with him in charge.
He may be betting on Brussels blinking to assure Greece remains a Eurozone member.
Not according to London-based Teneco Intelligence analyst Wolfango Piccoli, saying:
“SYRIZA’s belief that the troika will grant the new government significant leeway is likely to backfire.”
Yielding means other troubled EU countries will want similar concessions. Don’t expect them. Or a Grexit.
Reuter’s editor-at-large Hugo Dixon calls it “such a unique event that nobody knows where the chain reaction would lead.”
Economist/euro expert Bernard Connolly predicted euro system demise before its January 1999 introduction.
His 1995 book titled, “The Rotten Heart of Europe: The Dirty War for Europe’s Money” explained the risks in detail enough to understand.
Later he said troubled Eurozone countries can’t cut their way to recovery.
Austerity is hairbrained, he stressed. “So is the “malignant lunacy of monetary union.”
“Combining 17 dissimilar countries (now 19 with Latvia and Lithuania added) under one monetary/fiscal system.”
As nonsensical as mixing fire and ice, Connolly said. As well as believing more debt cures economic woes.
In 1998, Connolly predicted one or more weak European countries would face rising budget deficits, economic trouble, and a “downward spiral from which there is no escape unaided.”
“When that happens, the country concerned will be faced with a risk of sovereign default.”
Troubled Greece is the Eurozone’s poster child. Zombie-like. Effectively bankrupt.
Euro straightjacket rules destroyed it. Day of reckoning eventually looms.
In December 2001, Argentina faced its moment of truth. Halted all debt payments to domestic and foreign creditors.
Restructured nearly $100 billion in debt on a take-it-or-leave-it basis.
Imposed stiff haircuts on bondholders. From 2003 through 2007, sustained economic growth followed.
Helped by debt restructuring and currency devaluation. Greece can go a long way toward resolving its debt problems the same way.
Provided it abandon Eurozone straightjacket rules. Regain its sovereign independence.
Reclaim what never should have been sacrificed in the first place. Govern responsibly.
Restructure debt on its own terms. Prioritize economic growth, job creation and social justice.
Don’t bet on SYRIZA doing the right thing. It bears repeating. Business as usual wrapped in populist rhetoric looks most likely.
A Final Comment
Reports around early January 26 confirm that Tsipras and Independent Greeks leader Panos Kammenos formed “a new (coalition) government.”
“The prime minister today will see the president for his swearing in and will announce the composition of the government in which the Independent Greeks will participate,” said Kammenos.
It’ll officially begin governing today. Greece’s electoral outcome will be the main topic at Monday’s Eurozone finance ministers meeting. Expect agreement on demanding business as usual.
Stephen Lendman lives in Chicago. He can be reached at lendmanstephen@sbcglobal.net. His new book as editor and contributor is titled “Flashpoint in Ukraine: US Drive for Hegemony Risks WW III.” http://www.claritypress.com/LendmanIII.html Visit his blog site at sjlendman.blogspot.com. Listen to cutting-edge discussions with distinguished guests on the Progressive Radio News Hour on the Progressive Radio Network. It airs three times weekly: live on Sundays at 1PM Central time plus two prerecorded archived programs.
Posted by eirenae at 2:04 AM No comments:

Posted by eirenae at 1:59 AM No comments: