No Nukes - Historic Conference in Haifa (Israel) and Ramallah (Palestine)

The Emil Touma Institute for Palestinian and Israeli Studies and the Rosa Luxemburg Foundation, Israel Office, invite you to an international conference:  “For a Middle East Free of Nuclear Weapons and Weapons of Mass Destruction”, tomorrow, Thursday, December 5, at the Dan Panorama Hotel, Sderot Hanassi 107, Haifa; and on Friday, December 6, at the Tikotin Museum of Japanese Art, Sderot Hanassi 89, Haifa. The conference was held in Hebrew and English with simultaneous translation. A report on the successful event will follow soon. 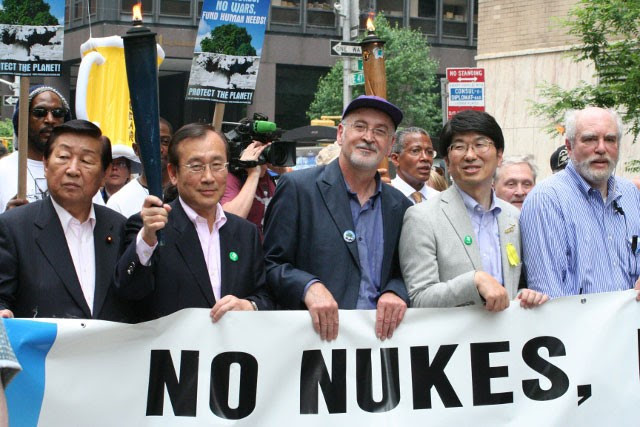 Issam Makhoul (in the middle of the picture) in a demonstration against nuclear weapons in New York (photo: United Nations)

Posted by eirenae at 3:16 AM No comments:

Believing that now is the time to intensify the campaign in Israel on matters of Nuclear Weapons and WMD disarmament, and believing that the security of the citizens of Israel and the peoples of the region will not be met by the stockpiling of nuclear bombs and WMDs, and not by disastrous wars - but rather by disarmament, and just peace, we have announced the formation of a preparatory committee for an International Conference in Israel proper (Haifa) with the title "For a Middle East Free of Nuclear Weapons and Other Weapons of Mass Destruction". Our decision is to hold the conference in Haifa, at December 5-6th, 2013.

Join the conference and donate to our cause.

Follow the following steps to sign up for the conference being held in Haifa on the 5th & 6th of December.

Leave a donation for our cause.


There has been much media attention on the recent nuclear agreement between the international community and Iran. Though the deal was harshly condemned by Israel, much of the world sees it as a welcomed achievement — lessening the chances of a regional war by steering Iran away from developing nuclear weapons.
Meanwhile (today and Friday), a “Conference For A Middle East Free of Nuclear Weapons And Other Weapons Of Mass Destruction” is being hosted in Haifa, Israel, by a wide range of activists, civil society organizations, political groups and well-known Israeli political figures and Israeli academics.
Impetus for this conference was a U.N. General Assembly resolution in May 2010 calling for a conference in Helsinki to promote the creation of a nuclear free zone in the Middle East.
This would entail all countries of the region, including Israel, signing onto the Non-Proliferation Treaty and the treaty on banning chemical weapons. But Israel — not Iran — decided to boycott the Helsinki conference, and consequently the conference was cancelled.
Those organizing the Haifa conference believe the security of Israel and stability of the region will not be met by the stockpiling of nuclear bombs and WMDs, and not by disastrous wars but rather by disarmament and just peace. Because Israel would not come to the Helsinki conference, they are bringing it to Israel.
Will this historic meeting get its due attention from the media? Probably not, because the topic of Israel’s stockpile of nuclear weapons will surely be addressed front and center.
Valori George
Corvallis
Posted by eirenae at 3:08 AM No comments: