The Road to Moscow Goes Through Kiev: A Coup d’Etat That Threatens Russia

The Euro-Atlantic Drive into Eurasia: Using Kiev to Target Russia and Beyond…  (Excerpt)
The US and EU support for the Ukrainian opposition, even if in part, is aimed at bringing Ukraine into their orbit and to encircle, isolate, and eventual subvert the Russian Federation. Resurgent Orangists and a new coalition of opposition figures have formed a new front, which can be called a neo-Orangist front, which is intensely intent on shifting Ukraine into the Euro-Atlantic orbit of Washington and the European Commission through eventual membership in such institutions and supranational structures as NATO and the European Union.
These opposition politicians made a mess of things after the Orange Revolution when they ran Ukraine earlier. It remains to be seen if they can re-orient Ukraine into the Euro-Atlantic zone (the word “Euro-Atlantic” camouflages the role that the US plays in Europe; more properly it should be called the Euro-American zone). When mainstream opposition leaders were ruling Ukraine, they were too busy embezzling and fighting one another to further the goals of the US and the EU. Yulia Tymoshenko, when she was in the position of prime minister, and the Orangist President Viktor Yushchenko were even busy accusing one another of corruption and betrayal.
There is a simultaneous campaign to erase Ukraine’s history and its deep and historic ties to Russia from the Soviet and pre-Soviet eras. Not only has the Russian Federation been demonized and the Russian language discriminated against in Ukraine by the mainstream opposition and the ultra-nationalist elements inside its ranks, but Ukrainian citizens with ethnic Russian background or favourable views towards Russia and Eurasian integration have also been portrayed as traitors, foreigners, or the enemies of Ukraine. Any reminders of a common history with Russia have been attacked, including monuments to the fallen soldiers that defended Ukraine and the Soviet Union from the Germans during the Second World War or, as it is called in Ukraine and Russia, the Great Patriot War.
Concerning Syria and Iran, it has been repeatedly stated many times that the road to Tehran goes through Damascus and that the US and its allies have targeted Syria as a means of going after Iran. In regards to Ukraine and Russia, a very similar axiom is also applicable. The road to Moscow goes through Kiev. The takeover of Ukraine is part and parcel of a geo-strategic campaign against the Russians, as is the regime change campaign against Damascus to a lesser degree.
Regime change in Ukraine is part of a covert and overt war against the Russian Federation. The installment of a puppet government in Ukraine will remove one of the most important partners that Moscow has. If Ukraine joins the EU and NATO, it will be a direct threat to the western borders of Russia and the security of one of the most important Russian naval bases, which is the home of the Russian Black Sea Fleet and located at Sevastopol in the Crimean Peninsula.
If they escalate, the events in Ukraine will disrupt the security and diplomatic ties between all the regional countries in Eastern Europe. Poland is already being watched with distrust from Belarus and Russia. The Polish government, in its interaction with Ukraine, has acted just like the Turkish government has acted towards Syria. With the backing of the governments of the US, Britain, Germany, and France, Warsaw has supported Ukrainian anti-government forces in multiple ways, just as Ankara has supported anti-government forces and regime change operations inside Syria in multiple ways.
Russia is not alone. The Russian Federation is not the only country concerned about what has happened in Ukraine. The estrangement of Ukraine from Russia additionally aims to isolate Russia from Europe and to reduce the Eurasian Union being formed by Russia, Kazakhstan, and Belarus into a predominately Asiatic project instead of a dually European and Asian project. Both the Belarusian and Kazakhstani government are worried too. Countries like Armenia, Kyrgyzstan, Iran, and China are watching the events in Kiev with concern as well. Ukraine has been a partner to these countries and they all view the conflict in Syria and the anti-government riots in Ukraine and Venezuela as part of a multi-front global war that the US has waged against them and their allies.
The views of the Iranians are not much different from that of the Russians. Iran has voiced its concerns that what has been set in motion in Kiev will result in the eventual disintegration of Ukraine with far-reaching consequences that will destabilize the flanking Caucasus region, which shares the Black Sea with Ukraine, and will eventually reach Iran. The head of the Iranian military has even commented on the coup as a “move from independence to dependence.”
Just to give an idea on the importance of the value that this group of countries put on Ukraine, it should be noted that the Chinese signed a December 5, 2013 bilateral agreement announcing that Ukraine was Beijing’s strategic partner. Included in the agreement was a Chinese pledge to provide Kiev with the military protection of a Chinese nuclear umbrella. The governments of Ukraine, China, and Russia had also discussed admitting Ukraine into the Shanghai Cooperation Agreement (SCO). 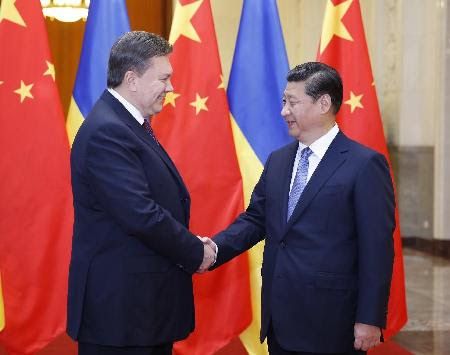 There is no question that the Ukrainian government is corrupt, but the opposition is no better and equally as corrupt. It cannot be denied, however, that when it comes to the question of popular backing by the Ukrainian people, the Party of Regions and its political allies have greater support from Ukrainians than the opposition parties that have taken over the country through the use of force and intimidation. Nor does the pandering of fearful Party of Regions officials towards the empowered opposition justify or hide the coup that has taken place in Kiev; these officials are now trying to either save their own skins or salvage the situation.
Even if it is denied that the opposition originally planned a coup, only when democratic means are exhausted can such a use of force be legitimate. The mainstream opposition leadership in Ukraine galvanized all their supporters and mobilized them into pouring into Kiev and pushed for a violent escalation, while the pro-government half of the country remained mostly immobilized. As mentioned and alluded to earlier, the show of numbers in the streets of Kiev by the opposition also has an equally large or possibly even larger number of Ukrainians opposing it. What about their opinions about the future of Ukraine?
full article here
http://www.globalresearch.ca/the-road-to-moscow-goes-through-kiev-how-the-protests-in-ukraine-transformed-into-a-coup-that-could-target-russia/5370479
By Mahdi Darius Nazemroaya
Global Research, February 25, 2014
Articles by:Mahdi Darius Nazemroaya

An award-winning author and geopolitical analyst, Mahdi Darius Nazemroaya is the author of The Globalization of NATO (Clarity Press) and a forthcoming book The War on Libya and the Re-Colonization of Africa. He has also contributed to several other books ranging from cultural critique to international relations. He is a Sociologist and Research Associate at the Centre for Research on Globalization (CRG), a contributor at the Strategic Culture Foundation (SCF), Moscow, and a member of the Scientific Committee of Geopolitica, Italy.