NATO’s absurd denials amid acts of war in Syria

Finian Cunningham (born 1963) has written extensively on international affairs, with articles published in several languages. Originally from Belfast, Northern Ireland, he is a Master’s graduate in Agricultural Chemistry and worked as a scientific editor for the Royal Society of Chemistry, Cambridge, England, before pursuing a career in newspaper journalism. For over 20 years he worked as an editor and writer in major news media organizations, including The Mirror, Irish Times and Independent. Now a freelance journalist based in East Africa, his columns appear on RT, Sputnik, Strategic Culture Foundation and Press TV.
Get short URL

© Russell Cheyne / Reuters
4.5K5
In two weeks we have seen two apparent acts of war by the US-led NATO military alliance in Syria. First, the Turkish shoot-down of a Russian warplane inside Syrian airspace; now this week the Syrian army is hit in a deadly airstrike.
Despite absurd denials, the grim conclusion is that NATO is at war in Syria.
The Syrian government is unequivocal about the latest incident. Damascus issued a condemnation to the UN Security Council on Monday over what it says is “a flagrant act of aggression” by the US military coalition. Early reports say three Syrian soldiers were killed and over a dozen others seriously wounded when an army base was blasted in the Deir Ezzor eastern province. Four US-led coalition warplanes were apparently involved in the attack, firing nine missiles at the base.

However, Colonel Steve Warren, spokesman for the US coalition, was quoted by various media outlets denying that NATO aircraft carried out the raid. Warren claimed that coalition fighter jets had conducted airstrikes at a location 55 kilometers from the Syrian army camp, which is located near the village of Ayyash. He said the airstrikes were against oil-smuggling operations run by the Islamic State (IS) terror group and there were “no humans” in the vicinity.
So who did carry out the deadly attack on the Syrian army? The US, Britain and France have been flying warplanes in the eastern province where the IS group has its strongholds around Deir Ezzor.
Washington and its NATO allies have negligible credibility. The US-led alliance has been operating an absurdist policy while bombing Syria for the past 15 months. Allegedly targeting the IS network, the terror group has only expanded its territory since Washington began (illegally) bombing Syria back in September 2014.
More recently, NATO has flatly denied Turkey’s provocative shoot-down of a Russian warplane even though Russia’s flight data shows that its Su-24 bomber was hit by a Turk F-16 jet that breached Syria’s border before firing its air-to-air missile.
Washington has also denied extensive aerial evidence of oil smuggling by the Islamic State terror group wending its way across the border to Turkish industrial centers. Russian defense ministry spokesman Igor Konashenkov has mocked the American “see no evil” statements on the industrial-scale oil smuggling into Turkey as a “theater of absurd”.
When does theater of the absurd stop peddling double think and just become plain, factual war theater?
Read more

Syria slams US-led coalition deadly strike against troops as 'act of aggression'
American political analyst Randy Martin at crookedbough.com says that recent events are proof that Washington and its NATO allies are indeed at war in Syria. Not against the IS jihadists, as officially claimed, but against the Syrian state. By extension that means NATO has also moved to a war footing against Russia, as an ally of the Syrian government of President Bashar al-Assad.
“It’s quite clear that the US and the other NATO powers have stepped up their military operations in Syria precisely because their covert war for regime change against Assad is being smashed up by Russia’s intervention,” Martin told me. “The whole notion of the West backing so-called moderate rebels while being opposed to the Islamic State brigades is just a preposterous charade furnished in part by the Western media. All these groups are working as mercenary proxy armies for the Western objective of regime change.”
“Russian President Vladimir Putin has dealt a decisive blow to the US-led covert campaign of deploying various proxy terror groups to overthrow the Syrian state. It’s like Putin has smashed a hornet’s nest hanging from a tree and now all hell is breaking out,” says the analyst.
Since Russia ordered its warplanes and cruise missiles into Syria on September 30, the intervention has decimated hundreds of jihadi bases and, crucially, the oil-for-weapons racket that fuels the Western-backed covert war.
Martin reckons that this strategic reversal for US-led objectives in Syria is what is motivating the sharp upturn in NATO military operations in the country. Last week, the British and German parliaments voted for their air forces to join the US and French airstrikes. Britain’s RAF has already carried out strikes, the first one coming within hours of London’s parliamentary approval.
The analyst says that the NATO military gear-change is “all about salvaging a situation in which Western powers are losing their covert war and their proxy means to prosecute that war.”
Russia has exposed a “giant, sordid criminal enterprise” whereby Western governments are being seen to be in league with regional despotic regimes like Saudi Arabia, Qatar and Turkey. More damningly, Western governments are also shown to be colluding with some of the most barbaric terror groups known in modern times.
Putin’s principled military intervention to defend Syrian state sovereignty has flushed out the criminal parties and their joint enterprise to overthrow an elected government.
This is why Washington and its NATO allies have reacted with such manic militarism. It is entirely plausible that Turkey was given the green light by its NATO superiors to shoot down the Russian warplane on November 24.
The contradictions in NATO’s stated policies, as uncovered by Russia in Syria, are becoming unbearable.
US President Barack Obama at the weekend made yet another solemn nationwide speech telling the American people that as Commander-in-Chief he was committed to “hunting down” terror groups in Syria and Iraq. Obama also declared that his government would order regional allies like Saudi Arabia and Turkey to clamp down on funding for terrorists.
But virtually everything in reality shows that Washington and its Western allies are telling lies. Their military operations in Syria and Iraq have only made the terror networks expand and their Turk ally – a NATO member – is up to its eyes in financing jihadists through a massive oil-smuggling racket.
US Secretary of State John Kerry has even backed Russian foreign minister Sergei Lavrov’s calls for the Turkish border to be closed down to prevent the flow of illicit oil, weapons and fighters. Yet, Washington on the other hand patently denies that Turkey is involved in this terror trade.
Russia and the Syrian army are the two forces that have made decisive advances against the terror brigades. In the past week, the Syrian army with Russian air support has retaken major areas of Aleppo in the north, Homs in the centre and Qalamoun to the west. The Syrian-Russian alliance is also moving to push back jihadists in the oil-rich eastern provinces – the last stronghold of these mercenaries.
The Syrian army base hit this week near Deir Ezzor was an important spearhead against IS in the east.
It is therefore hard not to conclude, according to Martin, that the US and its NATO allies are caught in a dilemma. “Their backs are against the wall because Russia is destroying their criminal enterprise in Syria,” he says.
And, disturbingly, it looks like Washington is prepared to start a world war in order to save its criminal enterprise – while acting as the air force for jihadist terrorists.
LISTEN MORE:
The statements, views and opinions expressed in this column are solely those of the author and do not necessarily represent those of RT.
Posted by eirenae at 2:43 PM No comments: 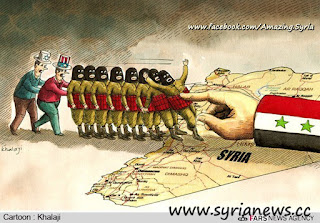