I stand with GAZA 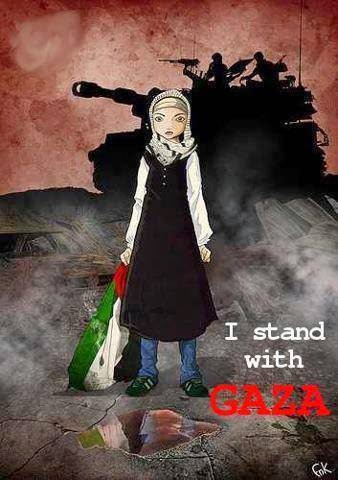 "Hundreds of Palestinian children are kidnapped, brutalized or killed by Israel, including several in the past two weeks and there is rarely, if ever,  a reaction from the world.

Just prior to the disappearance of the Israeli settler teens, the murder of two Palestinian teens was caught on a local surveillance camera. Ample evidence, including the recovered bullets and a CNN camerafilming an Israeli sharpshooter pulling the trigger at the precise moment one of the boys was shot indicated that they were killed in cold blood by Israeli soldiers. There were no condemnations or calls for justice for these teens by world leaders or international institutions, no solidarity with their grieving parents, nor mention of the more than 250 Palestinian children, kidnapped from their beds or on their way to school, who continue to languish in Israeli jails without charge or trial, physically and psychologically tortured. This is to say nothing of the barbaric siege of Gaza, or the decades of ongoing theft, evictions, assaults on education, confiscation of land, demolition of homes, color coded permit system, arbitrary imprisonment, restriction of movement, checkpoints, extrajudicial executions, torture, and denials at every turn squeezing Palestinians into isolated ghettos.
None of that seemingly matters....." (Susan Abulhawa http://othersite.org/susan-abulhawa-three-israeli-settlers-and-the-the-searing-hypocrisy-of-the-west/)

POSITIVE NEWS:Latin America Refuses to Live in US «Global Barracks»

Posted by eirenae at 8:58 AM No comments: