A German version follows the English and the Hebrew text.
The text of the declaration to  be signed is attached in English, Hebrew and German

Please sign now - bitte unterschreibe jetztPlease send your signatures to pakos@online.de
(name, organisation/intitiative, profession, place of residence.)
Dear friends of Palestine
It has been a few days since the dispute between David Sheen, Max Blumenthal and Gregor Gysi (parliamentary leader of the left party -- DIE LINKE) in Berlin and the press campaign against the two journalists is over for now. But this does not mean one should pretend it never happened.
Thanks to extraordinarily offensive behaviour from leaders of the DIE LINKE, the debate with Max and David in Berlin about the war crimes during the Gaza war in the summer this year, as well as the dangerous shifting of Israeli society towards the right, were effectively pushed into the background.
A prominent member of the DIE LINKE parliamentary party faction, Petra Pau, insulted Max and David, calling them anti-Semites and was in the forefront of the attempts to obstruct any discussion with them. Gregor Gysi refused to talk to them, when they tried.
We witnessed not only a press campaign against the Jewish journalists, but also a defamation campaign by the leadership of DIE LINKE. Extreme pressure were exerted against the members of parliament Annette Groth, Inge Höger, Heike Hänsel and Claudia Haydt, who had invited Max Blumenthal and David Sheen to the discussion.
The leadership of DIE LINKE have already betrayed their own aims of overcoming militarism and war during the Gaza war this summer. They failed to take a firm stand supporting the people in Gaza, who were subjected to war crimes. Amnesty International and Human Rights Watch have proof of this.
We can not accept this. If we keep silent DIE LINKE could well snuggle up further to an ever more rightwing Israeli government taking their betrayal of human rights in their stride, in order to gain favour with the other parties within the German parliament and to offer themselves as potential coalition partners.
We, the Palestine Solidarity Committee (Palästinakomitee) Stuttgart, have made a declaration of solidarity, which some members of DIE LINKE have signed (even some office holders). We urge you to also sign our declaration as quickly as possible (name, organisation/intitiative, profession, place of residence.) We intend to forward our declaration to the leaders of the party. You find the text of the declaration attached.
The declaration with the signatures will also be published on our website palaestinakomitee-stuttgart.de and facebook.com/PaKo.Stuttgart.
Please send your signatures in the next few days to pakos@online.de
If you have received this message more than once, please excuse the error.
In solidarity,
Attia Rajab, Palästinakomitee Stuttgart
Verena Rajab, Palästinakomitee Stuttgart, member of  DIE LINKE
Posted by eirenae at 10:56 AM No comments:

Opinions expressed in these links/articles are those of their respective authors.
They do not necessarily reflect my own opinion.
Wenn Sie zukünftig keine Emails mehr erhalten möchten, senden Sie mir bitte eine kurze Nachricht an drgweber@sin-nom.com.
To unsubscribe please send a short message to drgweber@sin-nom.com.
Posted by eirenae at 10:45 AM No comments: 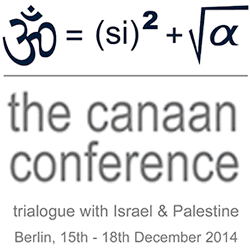 GOA Call for Solidarity with Palestine

The conclave of the Peace & Solidarity organisations of India and the
World Peace Council held at Goa from 28th to 29th November, 2014 after
thorough deliberations and taking stock of the United Nations stand
towards the establishment of an independent, democratic, contiguous and
viable Palestinian State living side by side in peace with a secure Israel
expresses its unflinching solidarity with the Palestinian people in their quest
and struggle for justice, peace and an independent Palestine State.
The Goa Declaration recalls with pride the great legacy and heritage of
India’s non-violent national independence movement. India has historically
supported the right of Palestinian people to their own state. It was among
the first non-Arab nations to recognise the Palestine Liberation
Organisation (PLO) in 1974 and the first non-Arab country to recognise
Palestine as an independent state in 1988. India has always opposed the
continued illegal occupation of West Bank and Gaza.
changing the demographic composition of the occupied territory by the
occupying power. Palestinians would be left with only 12% of original
Palestine. Further, Israel today controls virtually all entries and exits,
denies right to a seaport and controls the airspace. Israel has converted
Gaza into an open air prison where a densely populated Palestinian
population are denied access to the outside world. People are starved,
brutalised and a barbarous blockade is imposed on the people of Gaza.
Israeli attacks has resulted in death of thousands of people including
women and children.

The Goa Declaration calls for: