U.N. declares state of emergency in Gaza after floods 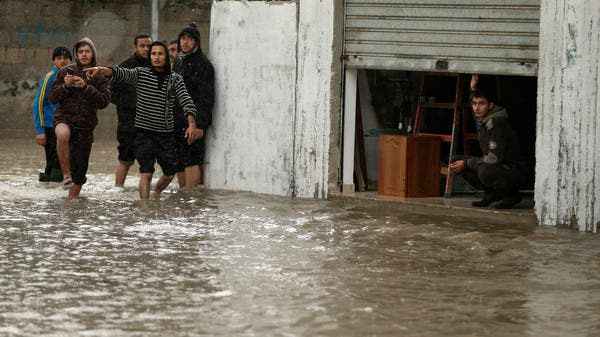 A man looks out of his shop as Palestinians walk through a flooded road following heavy rain in Gaza City November 27, 2014. (Reuters)
Text size A A A
AFP, Jerusalem
Friday, 28 November 2014
A United Nations agency declared a state of “emergency” in Gaza City on Thursday, after two days of heavy rains and flooding in the war-ravaged Palestinian enclave.
“Hundreds of residents in the flooded areas around Sheikh Radwan storm water lagoon have evacuated their homes,” the U.N. agency for Palestinian refugees said, referring to a northern district.
Some 100,000 Palestinians throughout Gaza remain homeless three months after a ceasefire ended a bloody 50-day war between Israel and Hamas militants, with reconstruction yet to begin.
While no casualties have been reported from the flooding, UNRWA said it was supplying “emergency fuel to municipalities, water, sanitation and health facilities.”
Robert Turner, its director of operations in Gaza, said the agency was “very concerned about such severe storms this early in the season and on the back of unprecedented damage and destruction” from the war.
Thousands of Gazans were displaced last December after torrential rain hit the coastal territory, UNRWA said.
“Such devastation exacerbates the already poor humanitarian situation for refugees and non-refugees in Gaza, which is dealing with the aftermath of a recent conflict and an acute fuel and energy crisis,” it said.
Little construction materials have entered Gaza following a U.N.-brokered deal under which Israel eased an eight-year blockade of Gaza.
According to a foreign diplomatic source, the mechanism for delivering materials has “taken longer than anticipated” to launch.
Last Update: Friday, 28 November 2014 KSA 08:09 - GMT 05:09 Gaza lacks basic civil infrastructure, and an estimated 20,000 homes were destroyed or damaged this summer.
Flooding from two days of  heavy rains forced hundreds of Gaza City residents to flee their homes on Thursday, as the United Nations Relief and Works Agency declared a state of emergency in the area.

The bulk of the damage was in areas around Sheikh Radwan lagoon, according to UNRWA, which added that no injuries were reported.

“We are very concerned about such severe storms this early in the season and on the back of unprecedented damage and destruction caused by the recent conflict,” said UNRWA’s Director of Operations Robert Turner in Gaza.

“We are particularly concerned for those families still seeking adequate shelter and preparing for the winter months, and for the impact the flooding is already having on children unable to attend school.”

One UNRWA school and an UNRWA Collective Center in Gaza City have been affected by the rising waters.

In addition 43 schools in the northern part of the Strip were also closed.

In one area of Gaza City, residents waded through knee-deep water with a bursting sewerage system.

In another neighborhood, Gaza’s municipal council workers and engineers were working to create a new pool to which water could be directed.

“As a result of the heavy rain, the water moved from all over the city to Shiekh Radwan pool, which is now flooded and the pumps cannot...

So as a solution and to prevent the floods from covering the area, we are creating a [subsidiary] pool,” said Nihad al-Mughani, head of engineers office in Gaza’s municipal council.

Gaza, with a population of 1.8 million, lacks basic civil infrastructure.

An estimated 20,000 homes were destroyed or damaged during Operation Protective Edge in the summer and major pieces of infrastructure, from roads to sewage treatment plants were seriously damaged.http://www.jpost.com/Arab-Israeli-Conflict/UNRWA-declares-state-of-emergency-in-Gaza-City-as-hundreds-flee-flooded-homes-383055 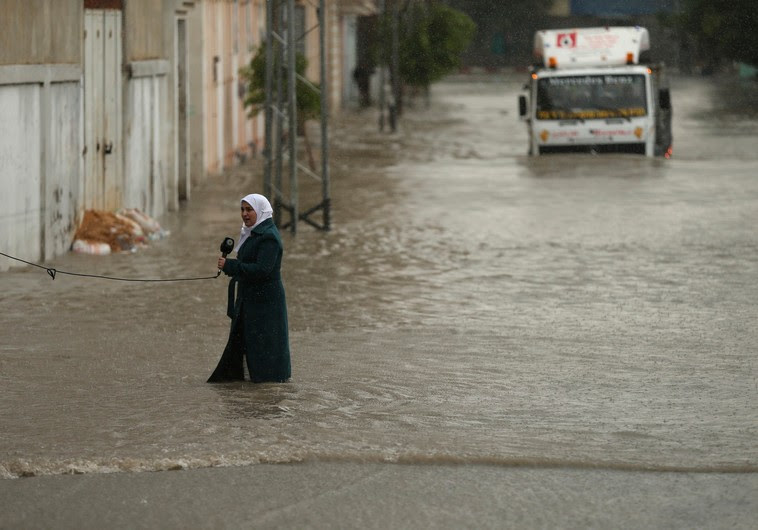