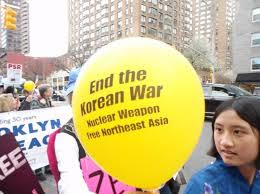 2015 is the year to celebrate women peacemakers: the 100th anniversary of the International Congress of Women, when over 1000 wilpf foundingwomen came together in the Hague amidst the horrors of World War I to call for an end to militarism—and founded the Women’s International League for Peace and Freedom, which this week has again assembled women peacemakers from every continent to celebrate women’s campaigns for peaceful, negotiated solutions to conflicts around the world.
At the Hague celebration are Nobel Peace Prize Laureates who led movements of women to bring peace to their countries – Maired Corrigan Maguire in Northern Ireland and Leymah Gbowee in Liberia.
This month Maguire and Gbowee are joining women from North and South Korea to march across the minefields that divide the Korean peninsula to call for a permanent Korean War peace treaty, the absence of which has been a key obstacle to ending military tensions.
Maguire explains, “We find it hard to imagine the pain of separation still felt by Korean families who Maired Maguirecannot travel an hour up the road, through the DMZ, to visit their families… With its barbed wire, armed soldiers and thousands of explosive landmines, the DMZ remains a tragic manifestation of how much the Korean people have suffered and lost from war.”Is The DMZ About to Get Hot?
Marchers are coming from 12 different countries. It is especially important that American women peacemakers are prominently involved in this march because it was the US that unilaterally divided the Korean peninsula at the end of the World War II, with the Soviet Union’s later agreement.
The lead organizer is Korean-American Christine Ahn, co-founder of Women De-militarize the Zone. Ahn explains the reason for the walk: “The unresolved Korean conflict gives all governments in the region justification to further militarize and prepare for war, depriving funds for schools, hospitals, and the welfare of the people and the environment. That’s why women are walking for peace, to reunite christine ahnfamilies, and end the state of war in Korea.”
Other marchers from the US will include: feminist writer Gloria Steinem who has pointed out that even the US Army War College has said “the only way to prevent the outbreak of catastrophic confrontation is to reach an agreement on ending the armistice from the Korean War, in essence a peace agreement, and give a formal security guarantee to North Korea tied to nonproliferation – in other words – it is talking”. American activists Medea Benjamin co-founder of Code Pink, and Cora Weiss, President of the global Hague Appeal for Peace, will also be walking.
The US committed at the end of the Korean War to sign a permanent peace treaty within 3 months – but has never has acted on that commitment. The US continues to maintain over 28,000 US troops on North Korea’s border and each year carries out provocative US-South Korean military exercises, keeping tensions high.
I can report firsthand from meeting in 1980 with Kim Young Nam, then the North Korean Foreign Minister, that negotiating a peace treaty was his first suggestion for improving relations with Washington and subsequently with South Korea. Sadly, the US has continued to prioritize keeping its forces on the Asian mainland over Koreans’ desires for ending the barriers which have separated families and led to constant military tension.
The walk is planned for May 24th, the International Women’s Day for Peace and Disarmament. Organizers report that first North Korea and then South Korea have given conditional approval for the walk. Ahn explains the group plans also “to hold international peace symposiums in Pyongyang and Seoul where we can listen to Korean women and share our experiences and ideas of mobilizing women to bring an end to violence conflict.”
Some friends of ours will be making a film about the march, Crossings, which can be supported through Kickstarter at http://kck.st/1K6wWQ1.
Last weekend I was in New York City for the demonstration at the time Koreans in nyc balloonof the UN’s nuclear disarmament talks. I loved seeing the Korean women marching for peace. Bravo for all these women peacemakers! Here in the Capital District, we in Women Against War take hope from these commitments of women across the world.
http://blog.timesunion.com/wagingpeace/women-peace-marchers-cross-minefields-between-north-south-korea/6907/
Posted by eirenae at 11:29 PM No comments:

US Wakes Up To New (Silk) World Order By Pepe Escobar, 4thmedia.org 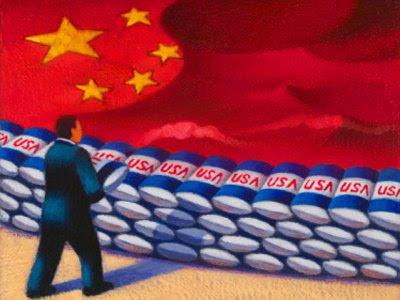 EDITOR’S CHOICE | 17.05.2015 | 22:11
The real Masters of the Universe in the U.S. are no weathermen, but arguably they’re starting to feel which way the wind is blowing.
History may signal it all started with this week’s trip to Sochi, led by their paperboy, Secretary of State John Kerry, who met with Foreign Minister Lavrov and then with President Putin.
Arguably, a visual reminder clicked the bells for the real Masters of the Universe; the PLA  (People’s Liberation Army of the People’s Republic of China) marching in Red Square on Victory Day side by side with the Russian military. Even under the Stalin-Mao alliance Chinese troops did not march in Red Square.
As a screamer, that rivals the Russian S-500 missile systems. Adults in the Beltway may have done the math and concluded Moscow and Beijing may be on the verge of signing secret military protocols as in the Molotov-Ribbentrop pact. The new game of musical chairs is surely bound to leave Eurasian-obsessed Dr. Zbig “Grand Chessboard” Brzezinski apoplectic.
And suddenly, instead of relentless demonization and NATO spewing out “Russian aggression!” every ten seconds, we have Kerry saying that respecting Minsk-2 is the only way out in Ukraine, and that he would strongly caution vassal Poroshenko against his bragging on bombing Donetsk airport and environs back into Ukrainian “democracy”.
The ever level-headed Lavrov, for his part, described the meeting with Kerry as “wonderful,” and Kremlin spokesman Dmitry Peskov described the new U.S.-Russia entente as “extremely positive”.
So now the self-described “Don’t Do Stupid Stuff” Obama administration, at least apparently, seems to finally understand that this “isolating Russia” business is over – and that Moscow simply won’t back down from two red lines; no Ukraine in NATO, and no chance of popular republics of Donetsk and Lugansk being smashed, by Kiev, NATO or anybody else.
Thus what was really discussed – but not leaked – out of Sochi is how the Obama administration can get some sort of face-saving exit out of the Russian western borderland geopolitical mess it invited on itself in the first place.
About those missiles…
Ukraine is a failed state now fully converted into an IMF colony. The EU will never accept it as a member, or pay its astronomic bills. The real action, for both Washington and Moscow, is Iran. Not accidentally, the extremely dodgy Wendy Sherman — who has been the chief U.S. negotiator in the P5+1 nuclear talks — was part of Kerry’s entourage. A comprehensive deal with Iran cannot be clinched without Moscow’s essential collaboration on everything from the disposal of spent nuclear fuel to the swift end of UN sanctions.
Iran is a key node in the Chinese-led New Silk Road(s) project. So the real Masters of the Universe must have also — finally — seen this is all about Eurasia, which, inevitably, was the real star in the May 9 Victory Day parade. After his pregnant with meaning Moscow stop — where he signed 32 separate deals — Chinese President Xi Jinping went to do deals in Kazakhstan and Belarus.
So welcome to the New (Silk) World Order; from Beijing to Moscow on high-speed rail; from Shanghai to Almaty, Minsk and beyond; from Central Asia to Western Europe.
By now we all know how this high-speed trade/geopolitical journey is unstoppable — spanning the Beijing-led, Moscow-supported Asian Infrastructure Investment Bank (AIIB) and the BRICs Development Bank. Central Asia, Mongolia and Afghanistan — where NATO has just lost a war — are being inexorably pulled into this trade/geopolitical orbit covering all of central, northern, and eastern Eurasia.
What could be called Greater Asia is already shaping up — not only from Beijing to Moscow but also from business center Shanghai to gateway-to-Europe St. Petersburg. It’s the natural consequence of a complex process I have been examining for a while now — the marriage of the massive Beijing-led Silk Road Economic Belt with the Moscow-led Eurasia Economic Union (EEU). Putin described it as “a new level of partnership.”
The real Masters of the Universe may have also noted the very close discussions between Russian Defense Minister Sergei Shoigu and the deputy chairman of the Central Military Council of China, Gen. Fan Changlong. Russia and China will conduct naval exercises in the Mediterranean Sea and the Sea of Japan and will give top priority to their common position regarding U.S. global missile defense.
There’s the not-so-negligible matter of the Pentagon “discovering” China has up to 60 silo-based ICBMs – the CSS-4 – capable of targeting almost the whole U.S., except Florida.
And last but not least, there’s the Russian rollout of the ultra-sophisticated S-500 defensive missile system — which will conclusively protect Russia from a U.S. Prompt Global Strike (PGS). Each S-500 missile can intercept ten ICBMs at speeds up to 15,480 miles an hour, altitudes of 115 miles and horizontal range of 2,174 miles. Moscow insists the system will only be operational in 2017. If Russia is able to rollout 10,000 S-500 missiles, they can intercept 100,000 American ICBMs by the time the U.S. has a new White House tenant.
Once again, the real Masters of the Universe seem to have done the math. Can’t reduce Russia to ashes. Can’t win in the New (Silk) World Order. Might as well sit down and talk. But hold your (geopolitical) horses; they might still change their mind.
By Pepe Escobar, 4thmedia.org
Posted by eirenae at 10:37 PM No comments: 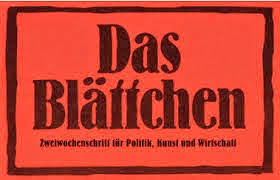 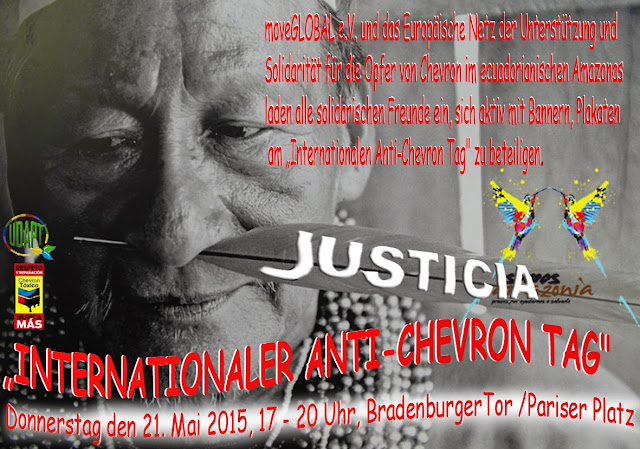