III b ) Settlers Storm The Ibrahim Mosque In Hebron. by IMEMC & Agencies

A number of fanatic Israeli settlers invaded, late on Thursday at night, the Ishaqiyya area of the Ibrahimi Mosque in the southern West Bank city of Hebron, designated for Muslim worshipers.
.....“This is an attempt to remove all Muslims from the mosque; the attack is not a separate incident, but part of ongoing violations,” he said, “The Israeli government is escalating its violations against the Palestinian people, their property, lands, and holy sites, in different parts of occupied Palestine.”Abu Sneina further said the invasion is a direct violation of International Law and international legitimacy resolutions, especially regarding protecting holy sites and the freedom of worship....    saed at imemc dot org
-------------------------------------------------------------------

http://www.richardsilverstein.com/2014/10/22/after-killing-2100-gazans-racy-idf-fashion-line-proclaims-make-love-and-war/
VI b ) After Killing 2,100 Gazans, Racy IDF Fashion Line Proclaims: “Make Love AND War”. by Richard Silverstein
Never missing an opportunity to shill both for Israel and the almighty shekel, two Israeli entrepreneurs determined now was the opportune moment to launch a military-focussed fashion line.  The fact that 2,100 Gazans were killed by the IOF only a few months ago seems not to have entered into their minds.  Or perhaps, being Israeli, they actually believed that Operation Protective Edge had burnished the street cred of the army, making it an opportune“hook” for promoting a racy new clothing line.  -  From the look of the marketing, this seems little more than a Playboy-style fashion shoot.  There’s the requisite video featuring a throbbing Jerry Bruckheimer-style car chase score.  And of course, the sexy models who are, (how’s this for authenticity?), REAL IOF girls!....
-------------------------------------------------------------------------

“Why do the German elites once again want war?” A Meeting of Trotskyites at Berlin's Humboldt UNiversity

Due to historical reasons and present day harmful alliances  peace workers  must be  very careful with regard to Trotskyite activities. Nevertheless will we publish the report below which a good friend has sent to us.  Meanwhile the real issue remains to encourage other political forces devoted to peace  to  bring up such extremely relevant  issue.

By our correspondents 25 October 2014

On Thursday, the International Youth and Students for Social Equality (IYSSE) held a very successful meeting at Humboldt University in Berlin. Some 200 people, including many students from Humboldt, as well as groups of students from other universities in Berlin, apprentices and workers filled the meeting room to capacity. The attendance was especially significant because the university administration had sought to censor the meeting. 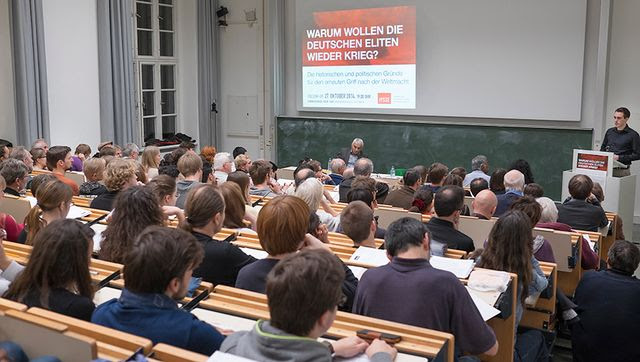 The meeting in Berlin
There was enormous interest in the subject of the meeting: “Why do the German elites once again want war?” Attendees said they had seen placards advertising the meeting and decided spontaneously: “I have to go.” The IYSSE, the youth movement of the Socialist Equality Party (Partei für Soziale Gleichheit—PSG), had previously held well-attended public meetings on the same topic in Frankfurt and Bochum. Further meetings are planned.
Peter Schwarz, a member of the Socialist Equality Party executive committee and secretary of the International Committee of the Fourth International, gave a comprehensive report, which was followed with great attentiveness by those present. The spokesman for the IYSSE at Humboldt University welcomed Schwarz, saying no one was better placed to answer the evening’s question. This was because, as a member of the World Socialist Web Site (WSWS) editorial board, Schwarz had played a major role in analysing the political and historical reasons for Germany’s renewed drive for world power. 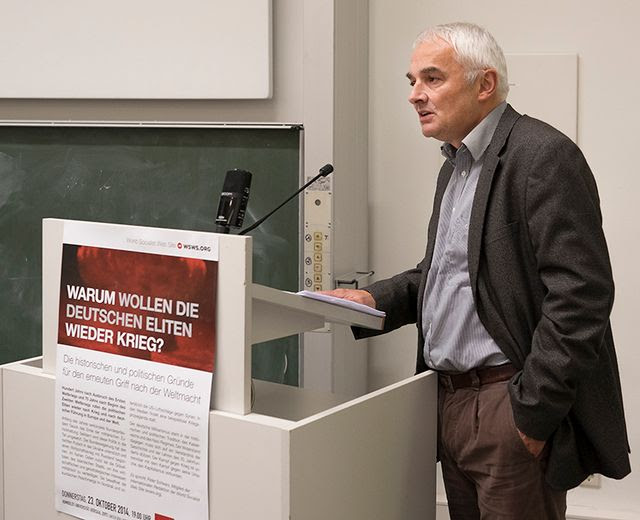