Gideon Levy interviewed by Max Blumenthal: Americans "Are Supporting the First Signs of Fascism in Israel"

Haaretz columnist Gideon Levy talks to journalist Max Blumenthal about how the Israeli occupation has poisoned not only the region but much of the world, and how BDS might be the last standing hope to dismantle it
TheRealNews Published on Mar 22, 2016

Bio
Gideon Levy is a prominent Israeli journalist and author of the weekly column Twilight Zone in the Israeli paper Haaretz. He is also an editorial board member of Haaretz. Between 1978 and 1982 Levy served in the Shimon Peres office when Peres was the leader of the Labor Party. 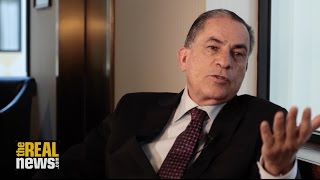 Gideon Levy: Americans "Are Supporting the First Signs of Fascism in Israel"
Posted by eirenae at 1:25 AM No comments: