“Boycotts and divestments are not anti-Semitic”: Organized religion takes up the BDS fight.

The BDS debate can no longer be dismissed as just a campus movement. Even the Vatican has recognized Palestine

So ermordeten israelische Besatzungskräfte und Siedler im Zeitraum April - Juni 2015 insgesamt 12 Palästinenser, 317 wurden verletzt und 1.118 inhaftiert. Zuletzt wurde Ayoub Abu Rumaila am Qalandiya-Checkpoint, der sich auf der Straße zwischen Ramallah und Ost-Jerusalem befindet, durch einen Schuss verwundet. Diese Zahlen entstammen einem von der PLO-Verhandlungsabteilung herausgegebenen Quartalsbericht.   -   Israelische Siedler haben ebenso ihre Angriffe mit Unterstützung der Besatzungstruppen gegen palästinensische Zivilisten fortgesetzt: Innerhalb der drei Monate sind 196 Angriffe von israelischen Siedler auf palästinensische Bürger dokumentiert. Letztere wurden somit durchschnittlich zwei Mal pro Tag durch die Siedler attackiert.    -    In Zeitraum von Mai - Juni wurden 24 palästinensische Häuser....
---------------------------------------------------------------------
http://www.counterpunch.org/2015/06/26/palestine-israel-and-the-sea/print
III ) How Long Will It be Business as Usual?  Palestine, Israel and the Sea. by ROBERT FANTINA
There has long been controversy about Palestinian territorial waters. This issue was raised last year, during Israel’s genocidal assault on the Gaza Strip, wherein part of the so-called ‘cease-fire’ agreement included that Israel would respect international law relating to the sea. Now the issue is once again an area of international focus.  -    Within the next several days, the ‘Gaza Flotilla’, a group of at least three international ships, will attempt to breach the illegal blockade of the beleaguered Gaza Strip, and dock in Gaza. When this was last attempted, Israeli soldier-terrorists killed ten defenseless, unarmed people, causing international tensions between Gaza and Turkey, home to several of the victims.   -As the Flotilla approaches Gaza, it is important to remember that the blockade of the Gaza Strip is illegal under international law. Yet this does not prevent Israel from condemning the Flotilla as if it, and not Israel, was the law-breaker...  -  ...So another attempt to hold Israel accountable for its atrocities will be thwarted, but at what price? All indications are that most of global society has had it up to here with Israel, and eventually the final straw will be applied, breaking the apartheid camel’s back. When that happens, not even Israel’s best friend and main financier, the United States, will be able to save it from itself.
Robert Fantina’s latest book is Empire, Racism and Genocide: a History of US Foreign Policy (Red Pill Press).
Posted by eirenae at 2:36 PM No comments:

German Media Silent about the Hijacking of 'Marianna' in International Waters

Gaza: The Hijacking of The Marianne by “The Pirates of the Mediterranean.” 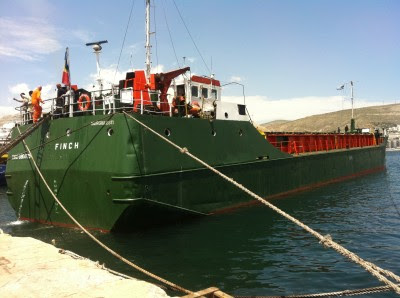 Piracy:” The practice of attacking and robbing ships at sea.” (Oxford English Dictionary.)
The “international community” is, it would seem, remarkably selective over piracy.
Concern over Somali pirates was such that foreign Navies were sent to protect shipping in international waters. In one incident three alleged pirates were killed and a Somali teenager spirited away to the US to be tried, whilst eleven others were sent for trial in Kenya. (1)
However, in the early hours of the morning (local time) of 29th June, three Israeli Navies ships intercepted and hijacked a Swedish flagged ship, the Marianne av Göteborg on route to Gaza in the State of Palestine (recognized as a State by the United Nations on 30th November 2012 by an overwhelming vote of 138-9, elevating Palestine to Non-Member Observer State a status bestowed on just one other entity, The Vatican.)
The ship was in international waters (approximately one hundred nautical miles off shore) but was boarded, towed by Israeli Navy vessels to Israel’s port of Ashdod. Cameras, computers, mobile ‘phones and belongings have been allegedly stolen by those who boarded. It is hoped they will be returned, but the track record is not good judging by the lack of return of personal – or any items, including aid cargo purchased by public donations destined for the people of Gaza – from the numerous previously pirated vessels. The Marianne was carrying a consignment of solar panels for a people whom, for most, a constant electricity supply has become a distant memory.
Israel’s territorial waters (in to which the Marianne had no intention of heading) presumably should extend just twelve nautical miles from shore as laid down in the 1984 UN Convention on the Law of the Sea which directs that:
“Every State has the right to establish the breadth of its territorial sea up to a limit not exceeding 12 nautical miles, measured from baselines determined in accordance with this Convention.” They do not extend one hundred nautical miles.
Israel has stated the Marianne was requested to change course a number of times. Israel has no legal right to demand anything of a vessel in international waters.
In a mind numbingly schizophrenic communication to the Marianne the Israeli government wrote:

There is no blockade on the Gaza Strip, and you are invited to transfer humanitarian supplies through Israel.” If there is “no blockade”, it has to be asked, why should humanitarian supplies be sent to Israel and why indulge in multiple war ship piracy, towing the ship to a foreign country to which it had never intended to travel?
The communiqué ended in regret that the Marianne’s passengers had not chosen to visit Israel where they would have been “impressed” by the democracy upheld by the Jewish state that affords equality and religious freedoms for all its citizens. So they were forcibly taken there to experience the “freedoms” from the inside of Givon prison, where all but two are currently being held. It is surely a truly mad world in “the only democracy in the Middle East.

Perhaps the government scribe was unaware of the latest of innumerable acts far from resembling democracy or equality, targeting, as ever, children:

While budget allocations for private Christian schools have steadily shrunk, the private yeshivas serving Israel’s ultra-Orthodox Jewish population have received increased allotments, to the point that the state now covers 100 percent of their budgets. The yeshivas do not teach the Ministry of Education’s core curriculum, and their matriculation rate hovers at a dismal 10 percent.(2)

State schools that serve Palestinian citizens of Israel are notoriously underfunded, with a recent report finding that the state allots $1,100 per year per Jewish student versus $192 per Arab student in the state system. No surprise, then, that average matriculation rates at state-run Arab high schools are about 27 percent, compared with 95 percent for the leading Christian schools. What’s more, teachers at state schools in the Arab sector must be vetted by Shin Bet, Israel’s internal security service. And the schools’ state-mandated curriculum places draconian limitations on teaching Palestinian history and literature.

However, regarding the Christian schools:

Last summer, the situation became critical after the ministry set a cap so low on the amount the schools may raise through tuition that they could no longer make up the shortfall caused by the shrinking state budget allocation.
Father Fahim Abdelmasih, the head of the Christian Schools’ Office in Israel, said that six months of negotiating with the Ministry of Education yielded no solution, calling the tuition caps a ‘death sentence’ for Christian schools in Israel.

So much for “equality and religious freedom for all it’s citizens” – and then there’s that wall, the segregation roads, the segregation buses, the checkpoints, the travel bans, bombed home repair bans, home demolitions, olive grove arsons, flower, fruit, vegetable export bans – an embargo on all normality.
The passengers of the Marianne currently being “impressed” by Israeli democracy from the inside of Givon Prison are:
Dror Feiler (Sweden) Musician and Composer
Ana Miranda (Spain) Member of the European Parliament
Nadya Kervorkova (Russia) Journalist
Kajsa Ekis Ekman (Sweden) Journalist, Author
Robert Lovelace (Canada) University Professor and retired Algonquin Chief
Joel Opperdoes (Sweden) Crew
Gustave Bergstrom (Sweden)
Herman Reksten (Norway)
Kevin Neish (Canada)
Jonas Karlin (Sweden)
Charlie Andreasson (Sweden)
Ammar Al-Hamdan (Norway) Aljajeera Arabic
Mohammed El Bakkali (Morocco) Aljazeera Arabic
Ohad Hemo (Israel) Channel 2 Israeli TV
Ruwani Perera (New Zealand) MaoriTV
Jacob Bryant (New Zealand) MaoriTV
Alarmingly, the whereabouts of passengers Dr. Moncef Marzouki, former President of Tunisia (2011-2014) and Palestinian politician Bassel Ghattas a Member of the Israeli Knesset are unknown at the time of writing.
The UN Convention on the Law of the Sea, binding for one hundred and fifty four nations and the European Union (not yet ratified by the United States) makes “piracy a universal crime and subjects pirates to arrest and prosecution by any nation.” However, for all the quoting of its fine words here, surprise, Israel has not signed this important, detailed Convention as it has ignored or violated innumerable UN Resolutions (3), starting from the country’s infancy with Resolution 57 of 18thSeptember 1948, which expressed: “deep shock at the assassination of the U.N. Mediator in Palestine, Count Folke Bernadotte, by Zionist terrorists.”
No doubt some of the reasons for disregarding the UN Convention on the Law of the Sea can be found in Part 7:
Article 89:
No State may validly purport to subject any part of the high seas to its sovereignty.
Article 90:
Every State, whether coastal or land-locked, has the right to sail ships flying its flag on the high seas.
Article 100:
All States shall cooperate to the fullest possible extent in the repression of piracy on the high seas or in any other place outside the jurisdiction of any State.
Ironically Somalia was an early signatory to the Convention, signing in 1982, thus can be held accountable. Will accountability ever apply to “the only democracy …” Will the UN, the “international community” ever demand it?
“The “Pirates of the Mediterranean”, tweeted someone this morning.
What a tragedy that a people who have historically suffered so grievously are being tarred by the actions of a relative few and of the government of Israel, a haven defined by Lord Balfour (2ndNovember 1917) as: “ the establishment in Palestine of a national home for the Jewish people … it being clearly understood that nothing shall be done which may prejudice the civil and religious rights of existing non-Jewish communities in Palestine …”
The “existing non-Jewish community” are either exiled, bombed, restricted, or in an open prison. Those who raise money, risk much and sail in solidarity risk their lives, are hijacked, put in a closed prison or, as in the case of the Mavi Marmara, murdered.
When will impunity end?
Notes
1) http://news.bbc.co.uk/1/hi/8003936.stm
2) http://america.aljazeera.com/articles/2015/6/5/israels-funding-policy-on-christian-schools-spurs-controvery.html
3) http://www.foreignpolicyjournal.com/2010/01/27/rogue-state-israeli-violations-of-u-n-security-council-resolutions/

I write to assure you that the U.S. Senate extends ist trust in you and shares your concerns over the ongoing dismissal (Entlassung) by President Petro Poroshenko of key figures in Ukrainian leadership who have been entirely committed (verpflichtet sein) to promoting democracy in your country. I concur (beipflichten), it is necessary to invest every effort to keep Oleksiy Pavlenko in his office of Minister of Agrarian Policy and Food. His discharge (Ausscheiden) will cause additional obstacles on the way of widening cooperation between the U.S. and Ukranian agricultural companies. I also consider it of utmost importance to make sure Yuri Nedashkovsky remain President of Energoatom Company. It is largely due to his efficient work that Ukraine has an opportunity to intensify cooperation with foreign partners in the field of nuclear production.

Besides, I would like to inform you that the U.S. Senate Ukraine Caucus has considered your proposals regarding Minister of Internal Affairs Arsen Avakov, Minister of Energy and Coal Industry Volodymir Demchyshyn and head of Ukrgasvydobuvannya Company Sergei Kostyuk. Mojority of the Senators agree that neither Mr. Dernchyshyn, nor Mr. Kostyuk meets the job requirements. Yet, there is no clear-cut solution to the problem of Mr. Avakov. Senators differ in their opinion. I consider it appropriate to postpone (verschieben) the issue for some time.