An estimated 15,000 militants from at least 80 nations are believed to have entered Syria to help overthrow the regime of President Bashar al-Assad according the CIA and studies by ISCR and The Soufan Group. Many of these fighters are believed to have joined units that are now part of the Islamic State. Western officals are concerned about what these individuals may do upon returning to their native countries. Related story. 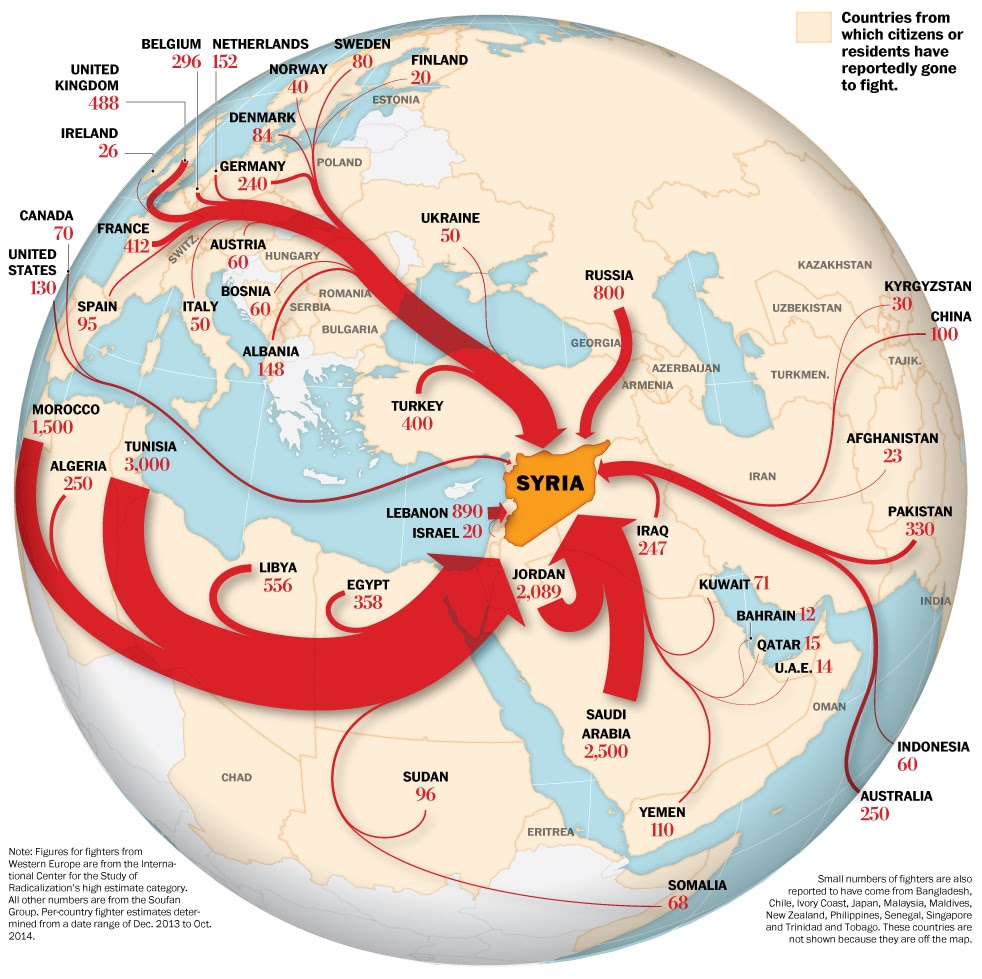 What would Happen if the Int’l Criminal Court Indicted Israel’s Netanyahu?

By Juan Cole | Jan. 2, 2015 |
36
By Juan Cole | (Informed Comment) —
If the International Criminal Court takes up Israeli government actions in the occupied Palestinian territories, it could well find specific officials guilty of breaches of the Rome Statute of 2002. Article 7 forbids “Crimes against Humanity,” which are systematically repeated war crimes. Among these offenses is murder, forcible deportation or transfer of members of a group, torture, persecution of Palestinians (an “identifiable group”) and “the crime of Apartheid.”
The Israeli government murdered Palestinian political leaders (not just guerrillas) and have routinely illegally expelled Palestinians from the West Bank or from parts of the West Bank illegally incorporated into Israel. They deploy torture against imprisoned Palestinians. Their policies on the West Bank, of building squatter settlements on Palestinian land from which Palestinians are excluded, is only one example of Apartheid policies. Getting a conviction on Article VII should be child’s play for the prosecutor. And there are other articles which Israel is guilty of contravening.
If Israeli government officials or leaders of the squatters in the Palestinian West Bank were convicted by the ICC, would there be any hope of enforcement? Israeli firms doing business in the West Bank would be exposed to billions of dollars of legal actions in European courts and would be unable to sell their goods in Europe, if they were declared fruits of crimes against humanity and apartheid. If the legal actions were brought by Palestine, Israel would be ordered to pay it massive reparations.
The ICC can only work through member states. But it could authorize those states to capture and imprison Prime Minister Binyamin Netanyahu, for instance. While it is unlikely that this could happen, Israel’s leadership might not be able to visit most of Europe, which would isolate them and much reduce their influence. The European institutions in Brussels would take an ICC conviction seriously.
The African Union and the Arab world decided to protect Sudanese President Omar al-Bashir from the ICC verdict against him. According to the African Union, he can freely visit African countries. But he cannot visit Europe or large numbers of other countries without risking arrest. And even in Africa, al-Bashir in 2013 had to abruptly leave the Nigerian capital of Abuja after only 24 hours because a Nigerian international law association filed a court case to have him arrested.
Over a third of Israeli trade is with Europe, and technology transfers from Europe are crucial to Israel. It could be kicked out of European scientific and technological organizations, where it presently has courtesy memberships. And Israeli leaders could end up being afraid to visit European capitals lest they be arrested, Pinochet style (even if governments ran interference for them, they could not be sure to escape lawsuits by citizen groups and could not be insulated from activist judges).
The world wouldn’t end for Israeli leaders if they were convicted, as it hasn’t ended for al-Bashir. But the consequences would be real and unpleasant, and over time could have a substantial impact.
—-
Palestinians decide to join ICC
Posted in Apartheid,Displaced and Refugees,Featured,Human Rights,Israel,Israel/ Palestine,Palestine,Torture,War Crimes | 36 Responses | Print |

Europe Must follow Through on votes in Favor of Palestine Recognition

Wiping another Country off the Map: Israel does it to Palestine

Did Israel go too Far? The Massacre at the UN School/ Refugee Center

China is Ready to Support Russia News | 04.01.2015 | 21:56 At the most tense period of currency turbulence in Russia when its enemies were noting with satisfaction that “the country is falling uncontrollably into the abyss of economic crisis and recession”, against Western rating agencies’ statements that they were going to review Russia’s ratings to the downside and declare them …
Weiterlesen →
Posted by eirenae at 8:43 AM No comments:

Posted by eirenae at 8:17 AM No comments: