Posted by eirenae at 4:19 PM No comments: Deir ez-Zor, Syria – Dozens of executions are being carried out in the 6th largest city of Syria, Deir ez-Zor. Terrorist groups who are directly linked to al-Qaida like Jabhat al-Nusra or other anti-Islamic Wahhabi groups like the Ahfad Muhammad Brigade are very active and holding strategically non-important areas in the city of Deir ez-Zor. This beheading took place on the 15th of August 2013, which could be connected to the unsuccessful August 2013 offensive in Deir ez-Zor by extremist groups. According to the cameraman, a Syrian soldier was captured. The executer is using a medium-sized knife to behead the man, whose hands are tied behind his back. During the video, the executor is telling the cameraman two times to put the mobile phone away, since he suspects that he is filming. It’s obvious that the estimated number of unknown cases regarding beheading/executions is very high – they don’t want to be filmed. The crowd accuses the man to be a “Nusayri”, an Alawite. It is disgusting how sectarian these Wahhabi terrorists are thinking. The Koran forbids such crimes principally. During their slaughtering, everyone tries to shout as loud as he can “Allahu Akbar” – this has absolutely nothing to do with God. At the end of the video, the cameraman says from 02:37: “Allahu Akbar, 08/15/2013. Slaughtering of a sniper by the lions of Jabhat al-Nusra“. Jabhat al-Nusra in Deir ez-Zor is led by Abu Salam Tabsah, who might be among the extremists. In the video you can also see a lot of children, children in the ...  END_OF_DOCUMENT_TOKEN_TO_BE_REPLACED

Call to Saveguard Peace in the Middle East and Geneva II Now!

Call to Saveguard Peace in the Middle East and for a Meaningful Geneva II Conference Now!

Arms down. There is no alternative to a diplomatic solution.

Syria is already „correctly“ obiding by the UNSCR resolution 2118 and in the process of destroying its chemical arsenal. However, this is far from being sufficient to saveguard peace in the country.
Thugs equipped with the most sophisticated arms and electronic surveillance machinery are still infiltrating the country and continue to destabilize it. Saudi Arabia and Katar make no secret of their massive military assistance. Israel has bombed Damascus sveral times, has been militarily threatening Iran even with a nuclear threat. Israel contiues to bomb Gaza at will. It has covered Lebanon with war. If there is to be a lasting Peace in the Greater Middle East, all parties need to be rid of Weapons of Mass Destruction (WMDS) now. The „rebells“ in Syria are to supervised too and their arms supply needs to be stopped immediatelly. The entire region must be rid of Weaopns of Mass Decustructions as has been called for a long time. Now it is time to mount public pressure.
It is well known that the Syrian chemical arsenal was but a „cheap“ response to the Israel nuclear capacity no matter that it „officially“ denied. The nuclear power Israel continues to threaten world peace with its occupational policy, its expansion of settlements and its frequent bombarding of neighbouring nations.

-As peace loving people we must call for a diplomatic solution. Peace is not secure as long there are weapons of mass destruction in a region that is powder keg.

-We must put pressure on our policy makers to convene in Geneva this year.
We must pressure for stopping the financing of arms supply to nations and individuals who continue to break international law.
-We must call for an interational solution which obliges all sides involved to stop their aggressions and to begin dismantle their arsenal of WMDs now.

We must not allow that one country is being singled out. General disarmament is the need of the day. Balanced and internationally supervised dismantelling of WMDs be a first step.

Let us unite voices for a joint call on our policy makers:

Go to Geneva and work work an ABC-free zone in the Middle East.
Help to stop terrorists and thugs who destabilize the region and threaten world peace.

Let us recall  German UN-embassador Werner Hoyer's speech at the UN Assembly on nuclear disarmament and take him by his words:

Posted by eirenae at 4:40 AM No comments: 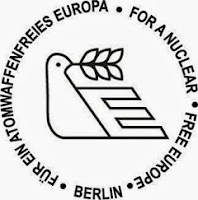 Posted by eirenae at 4:34 AM No comments:

Posted by eirenae at 4:17 AM No comments: