What Happened in Maan, Syria?

What Happened in Maan, the Two Massacres 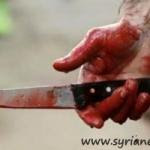 The first massacre in Maan The scene wasn’t strange for Firas, he’s seen worse. His memory goes back to the day his mother and sisters were slaughtered a year ago. “We got used to our blood being spilled by the infidels after the shouts of ‘Allah Akbar’. What happened recently is the second attack, drowned by the silence of those who act as the protectors of justice and human rights.” He sighs and continues, “The first time the Takfiris attacked was on 24/12/2012. There was a wedding and they took the chance to enter some vacant homes. They attacked three days later killing tens of civilians amid media silence.” Firas had lost his mother, four of his siblings and his cousin. They were slaughtered. He couldn’t receive the bodies for burial until a week later, by then the bodies were starting to decompose. Firas describes the first massacre in anger, as if it happened right in front of him. “My mother and sisters had hidden in the basement of our home, the terrorists entered. They cut the hands of my cousin and slaughtered my sisters and mother.” Firas’ anger turns to sadness, and he bows his head trying to hide his tears trying to regain his composure. “A week later we received the bodies, and we buried them in the town of Salhab. My mother was a simple old woman, her deepest joy was to bake for the whole village at dawn.” Firas, a man who didn’t reach thirty was ... Read More »http://www.syrianews.cc/happened-maan-two-massacres/
How much more does it take for us to comprehend and to take sides with the Syrian Government and its allies, helping to protect its citizens? Our duty is to spread the truth. (Blogger)
Posted by eirenae at 5:34 AM No comments:

Posted by eirenae at 4:42 AM No comments: