Posted by eirenae at 3:03 AM No comments:

Posted by eirenae at 1:26 PM No comments:

US claims over civilian deaths in Syria ‘absurd,’ Russia says

Iran's Supreme Leader Ayatollah Ali Khamenei © Alexei Druzhinin / Reuters
1.4K
The US is hostile towards Islam and tries to create divisions between Muslims, said Iran’s Supreme Leader Ayatollah Khamenei, also accusing Washington of conceiving the Islamic State terrorist group.
“One of the main tools used by the enemies to prevent the birth of modern Islamic civilization is through creating divisions among Muslims,” Ayatollah Seyed Ali Khamenei said on Tuesday, as cited by Fars news agency.
Khamenei believes that the US is against the principles of Islam and promoting terror groups such as Islamic State (IS, formerly ISIS/ISIL).
Read more 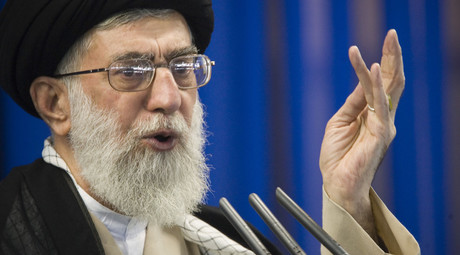 US infiltrates Iran though ‘money and sex’ – supreme leader Khamenei
“The present US officials are against the principles of Islam and, unlike their statements, they are after fomenting differences among Muslims, and its example is creating terrorist groups like Daesh (the Arabic acronym for ISIS) and other groups that have been created through the funding of the US affiliates and their political aids; they (the American officials) have caused the recent tragedies in the Muslim world,” Khamenei said.
“The Shiite or Sunni does not make any difference for the Americans; they are against any Muslim who wants to live in accordance with Islamic rules and make efforts to that end.”
Iran’s spiritual leader insisted that “arrogant powers” are creating internal conflicts between Muslims and destroy infrastructures of Arab countries such as Libya, Syria and Yemen.
“…when the Islamic awakening started they grew worried and tried to contain it and they even succeeded in some countries, but the Islamic awakening cannot be destroyed…” the Ayatollah said.
Read more

Rouhani calls on Muslims to ‘correct image of Islam’ worldwide
He also criticized the Islamic world for keeping silent about the pressure exerted on Bahraini Muslims, the ongoing bombings in Yemen, as well as the situation in Iraq and Syria.
Criticism of the polarization of the Muslim world was also expressed by Iranian president Hassan Rouhani, who called for unity on Sunday.
“There is neither a Shiite nor a Sunni crescent. We have an Islamic moon. We, Muslims, are in a world where we must be united,” the Iranian president said. “Does the destruction of Syria help strengthen Turkey, Jordan, Saudi Arabia, Qatar, the United Arab Emirates or other countries? Is anyone pleased by Syria’s destruction, apart from Israel?”
Ali Khamenei, who became Iran’s Supreme Leader in 1989 after the death of Ruhollah Khomeini, is a vigorous critic of the US policy.
The problem of Islamic State is a common challenge for Muslim states. Prominent politicians from Jordan, Egypt, Syria, Iran, Iraq, Turkey and other countries have criticized IS for its policy of terror, saying the group has nothing to do with Islam.
https://www.rt.com/news/327488-iran-ayatollah-khamenei-address/
Posted by eirenae at 12:42 PM No comments:

American writer and political analyst Daniel Patrick Welch has called US investigative journalist Seymour Hersh’s latest article “a bombshell.”
Hersh revealed in a lengthy article, published Sunday in the London Review of Books, that the US military defied Barack Obama on the ouster of the Syrian president, which, if true, would be a truly unprecedented revelation.
The article says the US was planning to remove President Bashar al-Assad from power and install the Daesh (ISIL) terrorist group in office in Damascus.
Such a move would have resulted in a confrontation with Russia, but the then US Joint Chiefs of Staff, Gen. Martin Dempsey, defied Obama and prevented such a war, according to Hersh.
Comment in to Press TV on Tuesday, Welch said, “Seymour Hersh has been dropping bombshell after bombshell for years…The one caveat that people seem to have on this is that he relies heavily on one source, this Defense Intelligence Agency Director Michael Flynn, or whoever he is."
"But certainly the main point that the US knew that they were arming and the CIA knew that they were arming ISIS [ISIL] and other groups is non-story, that part is a no-brainer, a case of the right hand knowing what the right hand is doing,” he added.
“The other part about the upper echelons of the military actually defying him [Obama] and going behind his back is quite the bombshell, and that is an amazing story,” he continued.
“He has been right on everything else. So I trust his judgment. But of course this is treasonous to actually actively defy a commander-in-chief, but it’s a kind of treason history likes, you know like the Soviet sub commander who countermanded a launch code in the Cuban missile crisis to probably save the world from nuclear annihilation,” he stated.
“Now, sometimes people have to think, and Obama does not think. He is not a thinking president. He has given over his entire presidency to the neocons – really sociopathic leadership, either that or he is in cahoots with them--it doesn’t really matter. He is the laziest, most cowardly person ever to sit in that chair. It’s a travesty, it’s a really sad historical fact, and it will be seen that way historically,” the analyst noted.
He went on to say that Obama "has a no vision, no spine, and no ability to stand up to these horrific forces that are arming head choppers -- I mean, we've been following this story for thirty years. It's nothing new: the CIA and the Pakistani ISI and Mossad and the Saudis and the Qataris -- all joining in cahoots to fund and train and arm globalized, militarized [Takfiri terrorism]. Which is not a thing. It is only a thing in the imagination and the machinations of the Western elite."
"There is no way this could exist without massive funding from outside, starting with Carter and Brezhinski in Afghanistan in the 80s, right up to today. And of course all the other death squads that Israel and the US have contrived to start, as the US has done throughout Central America, and Africa with the assassination of Lumumba -- this list goes on and on and on," he observed.
Welch said that “it is a bombshell from Seymour Hersh, and a welcome one. I hope he is right.”
“You know, the military  -- within -- like Seven Days in May, the old movie – this is a fantastic story – that the military said, ‘Whoa, wait a minute! This is insane to keep doing this to insist on this Cold War crap that Assad must go, and leave another hellhole, death filled chasm in another failed state in the Middle East like what they did in Libya; and someone, people finally are standing up within the circles of government, and that is a very welcome sign,” he observed.
“I don’t know how far this will go, but the rest of us are chomping at the bit, and waiting for somebody somewhere in power to wake up,” the political pundit concluded.

Interviews
Posted by eirenae at 6:33 AM No comments:

Why the West Can Never Defeat Russia" Andre Vltchek I will not give up and will keep writing and fighting, but at my pace.

Why the West Can Never Defeat or "Forgive" Russia

Posted by eirenae at 1:55 AM No comments: