Share on facebookShare on twitterShare on emailShare on pinterest_shareMore Sharing Services3

There is a good reason why Iran has been blocked from attending the Geneva II conference on Syria – because the meeting is not about finding a peaceful settlement. Rather, it is merely an American mechanism for engineering regime change in Syria.

Iran has consistently endorsed the sovereign right of the Syrian people to negotiate their political future – without pre-conditions or pressure from external powers.
And it is because of this Iranian position of principle over Syria that it is being banished at the behest of the US. Iran being nixed proves the US has fixed.

Contrary to Washington’s claims, Iran’s stance underpins the Geneva Communiqué formulated in June 2012, which called for any transitional Syrian government that might be formed to be furnished only through mutual Syrian consent. The communiqué does not call for incumbent President Bashar al Assad to stand down, it does not obligate his government to resign, and it accedes only to the principle of mutual Syrian consent over any agreed political outcome.
Washington and its allies, including the manufactured opposition-in-exile, have delayed the holding of the Geneva II conference by more than 18 months. That inordinate delay due to Western prevarication tells a lot. In the meantime, tens of thousands of Syrians have died due to violence and deprivation.

Why the tardiness in convening Geneva II? This is because Washington and its proxies have all the while been forging a warped reinterpretation of the Geneva Communiqué. In their new version, President Assad is not to be part of any Syrian transitional government. He has to go.

American Secretary of State John Kerry said so last week when he stated that “there can be no political solution in Syria” which involves Assad staying in power. In other words, Washington is just tailoring rhetoric for regime change.
Thus the Americans, having unleashed a covert terror war for regime change in Syria beginning in mid-March 2011, and subsequently having failed in that objective, now want to re-write the rules of the game, by insisting that the political process is pre-determined in their favor.
Earlier this week, United Nations Secretary General Ban Ki-Moon’s invitation to Iran to attend Geneva II sparked fury in Washington. America’s top diplomat John Kerry had given instructions to Ban that he could only issue the invite to Iran if the latter publicly accepted the US version of the Geneva Communiqué, which predetermines that Assad “must go”. To Iran’s credit it had already said numerous times that it would not accept any such conditions.
When Ban did not follow the American instructions for insisting on “Iranian acceptance of Syria’s transition” Kerry went into a rage. “Mr. Kerry was described by an American official as having been furious after Mr. Ban’s news conference [at the weekend],” reported the New York Times.
Like a well-trained monkey responding to an organ grinder, Ban did a reflexive U-turn and promptly “disinvited” Iran from the Geneva II conference, which opens this week in the Swiss city of Montreux. The ridiculous shenanigans make it obvious that there is a disingenuous political game being played here.
For a start, the American reinterpretation of the Geneva Communiqué is in clear breach of the original letter and spirit of that agreement, which had been worked out with Russia, China and other members of the UN Security Council.
If Washington’s claim that the Geneva II conference is predicated on a Syrian transition involving Assad stepping down, then that must be news to Russia, China and the Syrian government. Would the Syrian government be really attending a process that heralds its own demise?
Bashar al Assad in an interview only days ago said that he is prepared to continue in office if the Syrian people want him to, and that he may run in the next presidential elections scheduled for next year.
Washington’s much-trumpeted “transition” interpretation of Geneva is just that – a subjective, political assertion that betrays its real objective of trying to impose regime change on Syria.

Iran has not been invited because Iran’s support for Syrian sovereignty at Geneva II would further expose the unlawful US-led agenda for regime change. We are thus left with the ludicrous spectacle of Iran’s being absent, while the Americans crowbar a contrived opposition group into the seats at the negotiating table. This latter group does not even have a popular mandate within Syria and it exists solely in figment of exile, ensconced in luxury hotels. It has been dragged, splintering and spitting, to the Geneva conference by American arm-twisting and threats of financial penalties (bribes).

It is therefore wholly unwarranted for the US to put the kibosh on Ban Ki-Moon’s invitation to Iran to attend Geneva II on the basis that “Iran does not accept transition in Syria”. Iran’s position is fully consistent and faithful to the Geneva Communiqué. It is the lawless US government that is corrupting the negotiations. The implication that Iran has somehow fallen short is beneath contempt whenever Washington has broken multiple international laws to smash up yet another sovereign country – Syria – through state-sponsored terrorism and now political skullduggery.
It is also pathetic for the UN chief to buckle in the face of American bullying tactics. Many people’s view of Ban Ki-Moon being a spineless puppet at the beck and call of Washington has been once again vindicated this week.
In light of all such machinations, we may predict that the Geneva II summit will not amount to the badly needed objective of ending conflict in Syria, where some 130,000 people have been killed in nearly three years of foreign-backed violence. Geneva II is being set up as a political mechanism for regime change – a substitute for the failed American terror tactic.
What the international community – led by Russia, China, Syria, Iran and others – should be doing is not attending a fake political circus in Geneva, but rather they should be boycotting it and instead demanding the criminal prosecution of Washington and its NATO, Saudi, Qatari, Jordanian and Israeli accomplices.
Source : PRESS TV
Related Articles:
Posted by eirenae at 11:33 PM No comments:

Protest Against Efforts to Destabilize the Bolivarian Republic of Venezuela 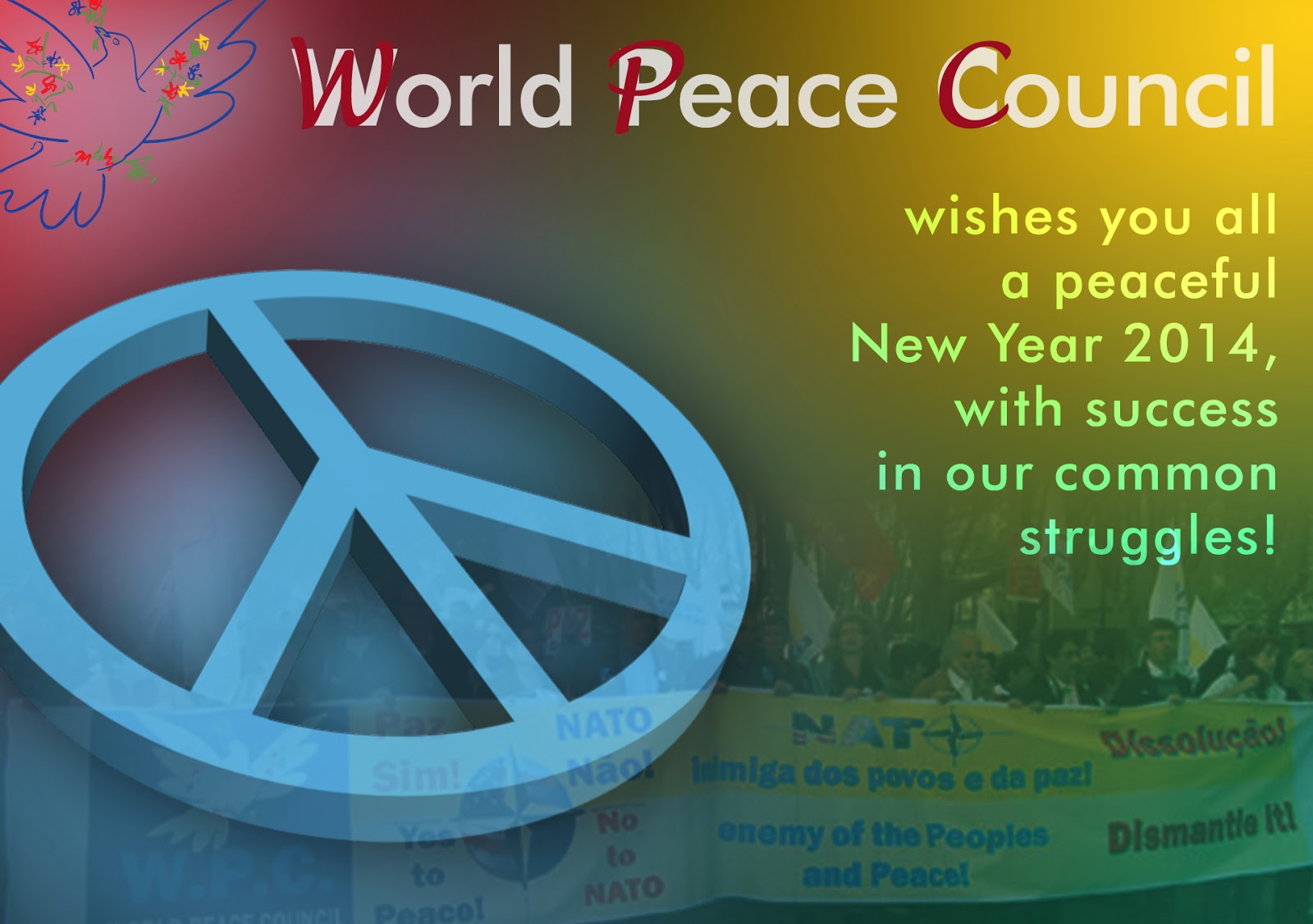 The World Peace Council denounces the ongoing plans and actions to destabilize the Bolivarian Republic of Venezuela by reactionary forces and groups with the support of imperialist forces.
The recent violent orchestrated events in Caracas and other regions of the country show clearly the intention of the local oligarchy and its foreign supporters which are aiming in putting obstacles to the efforts of the elected government of the country to empower the people and to solve social problems and needs.
The economic sabotage in multiple ways, the violent provocations and intimidation of the people are going hand in hand with the nostalgy of the old establishment which is loosing power and privileges and therefore is acting subversively against the efforts of the Bolivarian revolution and its forces.
The WPC expresses its full-hearted solidarity to its member organisation in Venezuela, the COSI (Committee for International Solidarity), to the anti-imperialist forces of the country and to the Venezuelan people.
The World Peace Council and the peace loving people all over the world are confident that the Venezuelan people will win this battle on the road to become masters of their fortunes, with sovereignty and dignity.

Posted by eirenae at 4:04 AM No comments: