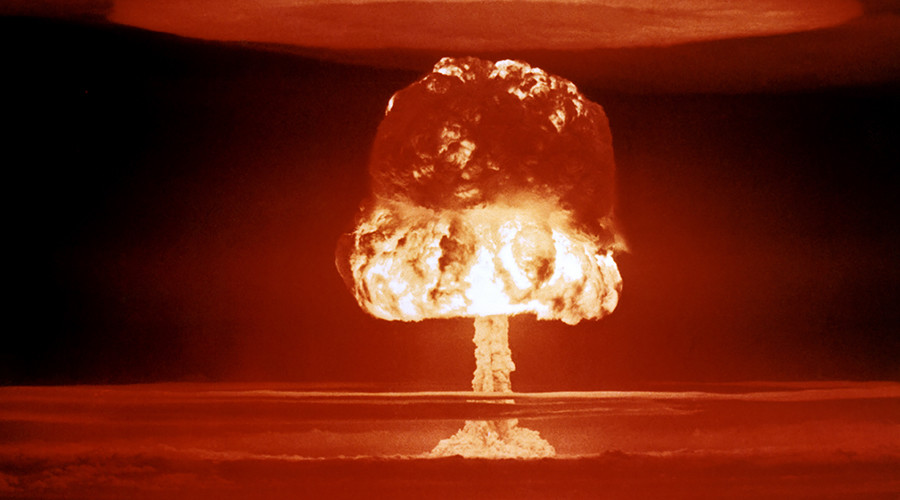 
1.6K
The very public spat between the leaders of North Korea and the United States might be entertaining in some respects. But the politicians are playing with fire and reminding us of humanity's fragility.
Right now, you can’t avoid media reports on the, increasingly ridiculous, exchange of insults between Kim Jong-un and Donald Trump. The irony of the situation is that while we have two, apparently, immature men venting their rage and hurling insults at each other, our only hope is that there is some anonymous and invisible institutional constraint preventing their anger from exploding into a real war.
Read more 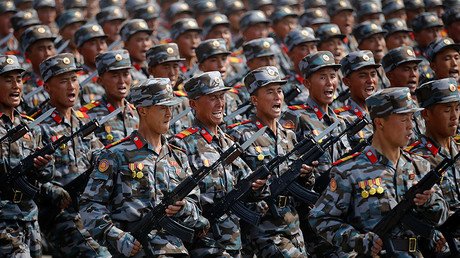 N. Korea urges struggle against ‘war-thirsty Trump’ & ‘gangster-like moves for domination’
Normally, we tend to complain that in today’s alienated and bureaucratized politics, institutional pressures and constraints prevent politicians from expressing their personal visions. But now we hope such constraints will prevent the expression of all too crazy dreams from these characters. So, how did we reach this point?
Alain Badiou recently warned about the dangers of the growing post-patriarchal nihilist order which presents itself as the domain of new freedoms. The disintegration of the shared ethical base of our lives is clearly aligned to the abolition of universal military conscription in many developed countries. Today, the very notion of being ready to risk one’s life for a common cause appears more and more pointless, if not directly ridiculous.

Which means that, throughout the world, the armed forces, rather than being a body in which all citizens equally participate, is gradually turning into a mercenary force. This disintegration affects differently the two sexes: men are gradually turning into perpetual adolescents with no clear passage of initiation that would enact their entry into maturity (military service, acquiring a profession and even education no longer play this role).
Thus, it’s no wonder that in order to bridge this void, post-paternal youth gangs proliferate, providing ersatz-initiation and social identity. In contrast to their male peers, young girls have become more and more precociously mature, treated as little adults and expected to control their lives and to plan their careers at an early stage. In this new version of sexual difference, men are ludic adolescents and out-laws, while women appear as hard, mature, serious, legal and punitive.Unlike in the past, today’s women are not forced into subordination by the ruling ideology. Instead, they are expected to play key roles - to be judges, administrators, ministers, CEOs, teachers, police officers and soldiers. A paradigmatic scene occurring daily in our security institutions is that of a feminine teacher, judge or psychologist taking care of an immature asocial young male delinquent.
As a result, a new feminine figure is arising: a cold competitive agent of power, seductive and manipulative, attesting to the paradox that “in the conditions of capitalism women can do better than men,” as Badiou outlines. In fact, contemporary capitalism has invented its own ideal image of womanhood.
This brings us back to Trump and Kim, two eternal adolescents who are both prone to irrational brutal outbursts that damage their own personas. Although the differences between North Korea and the US are obvious, one should nonetheless point out that they both cling to the extreme version of state sovereignty: “Korea first!” versus “America first!"And it’s also notable how the obvious madness of North Korea (a small country ready to risk it all and bomb the US) has its counterpart in the US still pretending to play the role of the global policeman, a single state assuming the right to decide which other states should be allowed to possess nuclear weapons.

However, the solution is not to just destroy North Korea, but to find a genuine way of “internationalizing” nuclear weapons and to make the situation where a single sovereign state is allowed to possess them (and threaten others with them) unacceptable. Because the moment we focus solely on the “madness” of North Korea, we thereby endorse the premise that they should not be allowed to do what only the selected “superpowers” can do. So, instead, we should strive to alter the entire constellation.
This urge to change the entire worldview emerges precisely when we are confronting the threat of total destruction, by way of nuclear war or an ecological catastrophe. In such a situation, our first reaction is a defensive effort to guarantee our survival: let’s forget about big emancipatory projects which promise radical change; our task at hand is to fight for the survival of what we have, with all the compromises and moderation it entails.
But what is it that we really have? The threat of the total destruction of humanity makes us aware of the totality of humanity and it appears only against the background of our own potential (self) destruction. So the true choice is not one between what we have and losing it all (or, in Cold War terms, between developing nuclear arms to protect our liberal freedoms and abandoning nuclear arms), but exposing ourselves to the risk of losing our freedoms.
As Alenka Zupančič puts it: “the true choice is between losing it all and creating what we are about to lose: only this could eventually save us, in a profound sense. When caught in the threat and fear of ‘losing it all’ we are in fact held hostages of something that does not yet exist. And isn't this kind of blackmail is actually the very means of making sure that it never will exist? It makes us focus on preserving what is there, and what we have, but excludes any real alternative, and means of really thinking differently. The possible awakening call of the bomb is not simply ‘let’s do all in our power to prevent it before it is too late’, but rather ‘let’s first build this totality (unity, community, freedom) that we are about to lose through the bomb’.”

And therein resides the unique chance opened up by the very real threat of nuclear (or ecological, for that matter) destruction: when we become aware of the danger that we will lose it all, we automatically get caught in a retroactive illusion, a short-circuit between reality and its hidden potential. Meaning, what we want to save is not the reality of our world but the reality as it might have been if it were not hindered by antagonisms which gave birth to the nuclear threat.
This is our true choice when we are confronted with a threat of total (self) destruction: a choice between a panicky retreat into self-preservation and the active engagement for change which aims at much more. If we gather the strength for the second choice, then - in Hegelian terms - we pass here from “abstract universality” (of the unleashed negativity which can only achieve a global nuclear destruction) to “concrete universality” (of an alternate new order in which such catastrophes will be no longer possible).
What is needed is no less than a new and global anti-nuclear movement, a worldwide mobilization that would exert pressure on nuclear powers and act aggressively, organizing mass protests and boycotts. It should focus not only on North Korea but also on those superpowers who assume the right to monopolize nuclear weapons.
Indeed, the very public mention of the use of nuclear weapons should be treated as a criminal offense, and leaders who publicly display their readiness to imperil millions of innocent lives in order to project their power should be treated as the worst criminals. And more than that, a global change in our stance is needed, what Peter Sloterdijk calls “the domestication of the wild animal Culture.”
The statements, views and opinions expressed in this column are solely those of the author and do not necessarily represent those of RT.
Posted by eirenae at 11:03 AM No comments: