Posted by: M. Klostermayr September 12, 2013 in Iran, Israel, Palestine, Switzerland, USA 3 Comments
Because “defensive alliances which have fixed and limited objectives are often more durable,” the “Syria-Iran alliance has survived” more than three decades of unwavering and insistent US – led military, economic, diplomatic and media campaign to dismantle it, but it is still enduring “because it has been primarily defensive in nature” and “aimed largely at neutralizing … Israeli capabilities and preventing American encroachment in the Middle East.”
This was the conclusion of the professor of International Relations at Webster University Geneva, Switzerland, Jubin M. Goodarzi, in his 2006 book, “Syria and Iran: Diplomatic Alliance and Power Politics in the Middle East.”
Professor Goodarzi’s conclusion is worth highlighting amid the thick smoke screen of “chemical weapons,” “civil war,” “responsibility to protect” and the “dictatorship – democracy” rhetoric of the US – Israeli propaganda, which is now misleading the world public opinion away from the core fact that the current Syrian conflict is the inevitable outcome of the 45 – year old Israeli occupation of the Syrian Arab Golan Heights in 1967.
Israel, protected by what President Barak Obama repeatedly describe as the “unshakable” support of the United States, is still maintaining its military occupation of the Golan as a “bargaining chip” to enforce upon Syria, irrespective of the regime and who is ruling in Damascus, the fait accompli which was created forcefully by the creation of the State of Israel in Palestine in 1948.
The US support to dictating the resulting fait accompli to Syria manifested itself first by empowering Israel by US arms and tax payer money to gain the “bargaining chip” of the Golan Heights, then by protecting the ongoing Israeli occupation of this Syrian territory.
The “bargaining chips” of the Sinai peninsula and the West Bank of River Jordan proved successful by dictating the Israeli terms on the signing of the “peace” treaties with Egypt in 1979, with Jordan in 1994 and the Oslo peace agreements with the Palestine Liberation Organization (PLO) in 1993, but failed so far to produce similar results with Syria and Lebanon, which remain in a “state of war” with Israel, mainly because Damascus still insists on making peace according to international law and the UN resolutions.
Damascus “did” engage the peace making process. The assumption to power of late al-Assad senior in 1971 was hailed by the US and its regional allies because he first of all recognized the UN Security Council resolutions No. 242 and 338, the basis of the US – sponsored so – called Arab – Israeli “peace process;” he fell out with his “comrades” in the ruling Baath party specifically because of this recognition.
Instead of building on al-Assad senior’s constructive approach, Washington made every effort to pressure him to accept the “Israeli” terms of peace: US sanctions were imposed on Syria and the country was condemned as a state sponsor of terror because of hosting the political offices of anti – Israeli occupation Palestinian and Lebanese resistance movements.
Only months after its invasion of Iraq, the US concluded it was very well positioned — and Syria very well cornered between US occupation in the east, the Israeli occupation in the west, the Jordanian, Palestinian and Egyptian peace accords with Israel in the south and the Turkish NATO member in the north – – to pressure Syria into submission.
On December 12, 2003 the Congress passed into law the “Syria Accountability Act,” the main purpose of which was to disarm Syria and deprive it of all its defensive means and “resistance” allies, long before the eruption of the ongoing current conflict in Syria.
The act demanded the withdrawal of the Syrian forces from Lebanon, ignoring the fact they were there upon the official request and blessings of Lebanon and the US themselves and the Arab League to secure Lebanon and help it recover after the civil war.
Their withdrawal has become indispensable only after the Israeli invasion of Lebanon in 1982, in the hope the invasion will dictate a peace treaty to Lebanon, which would have left Syria a peace pariah among the Arab immediate “neighbours” of Israel . No surprise then the Syria – Iran alliance was formalized in March that year with a series of bilateral agreements. The US invasion of Iraq in 2003 only accelerated their strategic cooperation.
More importantly, the act banned Syria’s engagement “in the research, development, acquisition, production, transfer or deployment” of “weapons of mass destruction,” “biological, chemical or nuclear weapons” and “medium and long range surface – to – surface ballistic missiles,” of course without any reference to Israel’s acquisition of the same and more.
Egypt’s signing of its “peace” treaty with Israel in 1979 deprived Syria of its regional strategic Arab partner in the 1973 war and the collapse of the former Soviet Union deprived it of its international one a decade later, leaving the country off balance.

Middle East, North Africa, sub-Saharan Africa and Central Asia
To strike a defensive alternative “strategic balance” with Israel has become the overriding strategic goal of Syria. No Arab substitute has been available. The revolution in Iran in the same year came as a God – sent breakthrough. The Syria – Iran alliance was cemented ever since. Dismantling this alliance has become the overriding US – Israeli strategic priority as well.
Until Syria finds an Arab strategic defence alternative to Iran or until the United States decides to mediate unbiased peace making between Syria and Israel, the bilateral Syrian – Iranian alliance will endure, unless Washington decides to repeat in Syria its failed invasion of Iraq , which all indications render a mission impossible.
To end the Israeli occupation of the Golan Heights and other Arab Israeli – occupied lands is the shortest US – Israeli path to dismantling the Syria – Iran alliance and to peace in Syria and the region.
That only would ensure that Syria will shift its outward focus strategically from looking for strategic balance with Israel to liberate its occupied land to the development of its society internally.
Ending decades of confusing the “national interest” of the United States as one and the same thing as that of Israel will for sure lay a solid ground not only for a Syrian but as well for an Arab – US constructive and just relationship built on mutual respect and common interests within the framework of international law and the UN charter.
This is the only and shortest path to peace in Syria and the Middle East, the time saving recipe and the less expensive in human as well as in economic resources. Herein the US can secure its regional “vital” interests “peacefully” without dragging its people and the region from one war to another incessantly.
Peace and injustice cannot coexist.
Author: Nicola Nasser
Source: Global Research
Nicola Nasser is a veteran Arab journalist based in Birzeit, West Bank of the Israeli-occupied Palestinian territories. nassernicola@ymail.com
Posted by eirenae at 10:41 PM No comments: 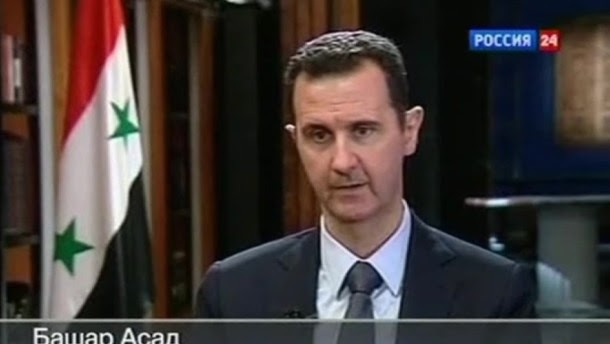 Posted by eirenae at 1:25 PM No comments:

Moscow Optimistic for Peace in Syria, however ...

Syria: Russia sees a chance to bury the hatchet and to find a political solution. While the Russian administration in Moscow has handed over a four-stage plan about their proposal to put the chemical weapons in Syrian stockpiles and arsenals under an international supervision by the United Nations (UN) to the US administration in Washington, the Foreign Minister of Russia, Sergey Lavrov, said in a new statement from Thursday, that there is still a chance for peace in Syria. END_OF_DOCUMENT_TOKEN_TO_BE_REPLACED
Posted by eirenae at 11:40 AM No comments:

Assad: Chemical Weapons ceded due to Russia’s plan, not because of US threats

Syrian President al-Assad said that Syria’s agreement about chemical arsenals did not happen because of the US war threats. The Syrian President Bashar al-Assad said in a new statement to a Russian TV channel that the Syrian government in Damascus has decided to put its chemical weapons arsenal under an international supervision because of the Russian proposal and not due of the US war threats and the possibility of a US-led military attack on Syria. END_OF_DOCUMENT_TOKEN_TO_BE_REPLACED
Posted by eirenae at 10:21 AM No comments:

Posted by eirenae at 1:35 AM No comments:

Our memo to Congressional Democrats showing overwhelming opposition to bombing Syria was reported on by the Washington Post, Washington Times, Huff Post, and others.

Public pressure worked. President Barack Obama addressed the nation last night and said he'll delay a congressional vote on bombing Syria in order to pursue diplomacy.
In the last week, over 73,000 PCCC members took action on this issue -- flooding Congress with phone calls, attending over 100 local vigils, and generating dozens of media stories from the Washington Post to MSNBC.
Last night brought great news, but this fight is nowhere close to over.
Politico reports, "A powerful group of senators is quietly drafting a new proposal" to give the White House power now to drop bombs later if this specific diplomatic option does not work.
We must continue pressuring Congress to let diplomacy work and oppose bombing Syria. Click here to stay in the loop with our Syria activism.
Then, share the news on Facebook and Twitter and ask your friends to sign up for action alerts on fighting for diplomacy, not war.
Giving the White House a blank check to drop bombs and end diplomacy is a bad idea.
War must be a last resort -- not a second resort. And the last few days proved that new diplomatic options can be found and pursued.
For now, the will of the public prevailed -- and together, we impacted history.
Click here to stay in the loop with our Syria activism, and share the news on Facebook and Twitter.
Thanks for being a bold progressive.
-- Amanda Johnson, PCCC Campaign Director
Posted by eirenae at 1:17 AM No comments: