Posted by eirenae at 2:55 PM No comments:

(TMS Editor’s Note: Mother Agnes was the organizer and leader, along with Nobel Peace laureate Mairead Maguire, of the Peace Mission to Beirut and Damascus in which I participated in May 2013 – Antonio C. S. Rosa)

The US intelligence community has been put to shame by the dedication and determination of a lone Christian nun. Her modest study of the videos of the Syrian chemical attack shows they were productions involving staged bodies. 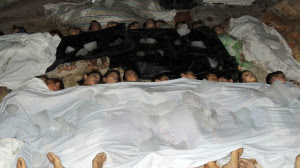 A handout image released by the Syrian opposition’s Shaam News Network shows bodies of children laid out on the ground in a makeshift morgue as Syrian rebels claim they were killed in a toxic gas attack by pro-government forces in eastern Ghouta, on the outskirts of Damascus on August 21, 2013. (AFP/Shaam News Network)
Those who take the time to read the report by Mother Agnes and the International Support Team for Mussalaha in Syria (ISTEAMS) will realize that it disgraces the entire US intelligence community for endorsing video footage that is clearly dubious and not credible upon careful study by even a layperson.
No one denies that chemical weapons were used. The US federal government and the  mainstream media in the US and countries allied to it have been playing a dirty game of equating thea) rejection of accusations that the Syrian government used chemical weapons with b) an outright denial that chemical weapons were used. The two are deliberately being mixed together to confuse the general public. The question is who used the chemical weapons? 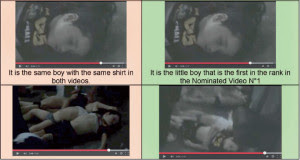 Same footage is used in different videos with different scenarios, according to the report. Photo from Mother Agnes report to UN.
The Pentagon’s intelligence agencies are the Air Force ISR Agency (AFISRA), Army Intelligence and Security Command (INSCOM), Defense Intelligence Agency (DIA), National Reconnaissance Office (NRO), Marine Corps IA (MCIA), National Security Agency (NSA), National Geospatial Intelligence Agency (NGA), Office of Naval Intelligence (ONI).
Aside from the non-departmental CIA, the rest of the departmental agencies are the Intelligence Division of the Drug Enforcement Administration, the Intelligence Division of the Federal Bureau of Investigation (FBI), Coast Guard Intelligence (CGI), the Office of Intelligence and Counterintelligence (OICI), the Office of Intelligence and Analysis (I&A), the US State Department’s Bureau of Intelligence and Research (INR), and the US Treasury’s Office of Terrorism and Financial Intelligence (TFI).
Nonetheless, this gargantuan body could not see what Mother Agnes Mariam has found and submitted to the United Nations. It is job of the agencies of the US intelligence community to examine these videos and to authenticate them. But they failed either to serve US foreign policy, or to show professionalism, or both.
Instead they nominated and endorsed a sample of footage from Syria as a means of proving that (1)the chemical weapons were used in the Damascus suburb of East Ghouta and (2) that the Syrian government was responsible for the diabolical attacks.
Dubious nature of videos selected by US intel community
The US intelligence community selected or nominated 13 videos that the Obama Administration used in their case against the Syrian government. These videos need to be carefully looked at.
The emphasis that US Secretary of State John Kerry put on the videos in his scripted speech that he read out to reporters on August 30, 2013, came across as ingenious. Kerry notably refers to the footage from Syria and constantly uses the words “our own eyes” and “seeing.”  He even asks that the videos be watched by the general public. He should have been taken to task on this, and he was through the study that Mother Agnes has produced.
Undoubtedly there will be those who will dismiss the fact that there is an almost total absence of adult corpses next to the bodies of the children, nor any parents, especially mothers, coming to claim their children. Where were the parents? From a cultural context, this is strikingly odd. It is highly unlikely that the parents, especially the mothers of all these children, would have left them alone or not rushed to where their bodies were.

At least 9 children in the video of the Press Office of Al Marj Region (right) have been transported from Kafarbatna (left) “out of any medical or humanitarian explanation”, the report claims. Photo from Mother Agnes report to UN.
If the parents were not killed, then where are they? If the parents, especially the mothers (following the gender script of Syrian society), were with their children, then where are their corpses?
In one video where it is stated that all the bodies are dead, we can see that the some of the corpses are being injected with an unknown liquid. Why?
The report also highlights the fact that there have been no public funerals or announcements about all the dead children. This is outside of both cultural and religious norms.
In the footage of one burial, only eight people are buried and three of them are not even covered in white shrouds, which is a compulsory ritual. Were these people murdered by the insurgents and disrespectfully buried without the proper rituals as a sign of disdain?
Moreover, the identities of the dead have consistently been withheld. There is more to say on this and it should be kept in mind.
Mother Agnes also makes a point of indicating that there is virtually an absence of the sound of ambulances and that in the testimonies that are used the individuals talking claim to have smelled the chemical that was used. Sarin gas, however, is odorless, which raises important questions about the testimonies.
Stage-managed scenes
Even if one ignores some of the arguments in the Mother Agnes report, there are some observations in the study that are undeniable. These observations will lead anyone to conclude that the scenes in the footage that the US intelligence community nominated are stage-managed.
Some of the same bodies were planted or recycled in different scenes and makeshift morgues that were supposed to be in different locations. The same bodies of the same children are spotted in different locations.
There is additional footage that either gives a contradictory impression to that of the videos nominated by the US intelligence community for the Obama Administration or shows that children were being arranged and moved around. 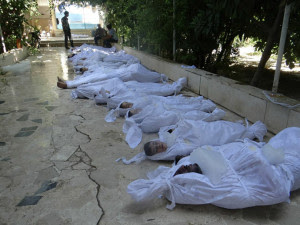 A handout image released by the Syrian opposition’s Shaam News Network shows bodies of children wrapped in shrouds as Syrian rebels claim they were killed in a toxic gas attack by pro-government forces in eastern Ghouta, on the outskirts of Damascus on August 21, 2013. (AFP/Shaam News Network)
A horrible conclusion
Many bad things have happened in Syria, including the chemical attack in East Ghouta. Yet there many questions that have to be answered.
There was a massacre in Latakia on August 4, 2013 that went unreported. The mainstream media in the US and the countries allied to it failed to cover this or casually pass it over, obviously because it was inconvenient to change the agenda in Syria.
The study mentions that the relatives of children that were abducted by the US-supported insurgents have begun to come forward to identify their relatives in the videos. It paints an ominous picture that the bodies of these children were prostituted to open the field in Syria for a foreign military intervention.
Regardless of whatever position one takes on Syria, it is their responsibility to analyze the videos from the alleged chemical attack and pay attention to observations of Mother Agnes Mariam’s report. 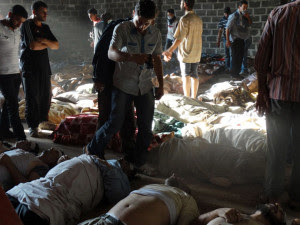 A handout image released by the Syrian opposition’s Shaam News Network shows people inspecting bodies of children and adults laying on the ground as Syrian rebels claim they were killed in a toxic gas attack by pro-government forces in eastern Ghouta, on the outskirts of Damascus on August 21, 2013. (AFP/Shaam News Network)
__________________________
An award-winning author and geopolitical analyst, Mahdi Darius Nazemroaya is the author of The Globalization of NATO (Clarity Press) and a forthcoming book The War on Libya and the Re-Colonization of Africa. He has also contributed to several other books ranging from cultural critique to international relations. He is a Sociologist and Research Associate at the Centre for Research on Globalization (CRG), a contributor at the Strategic Culture Foundation (SCF), Moscow, and a member of the Scientific Committee of Geopolitica, Italy.
Mother Agnès-Mariam of the Cross: from Palestinian father and Lebanese mother; Lebanese and French nationalities. In 1971 she entered the Carmel Discalced Carmelite Order and was cloistered for 21 years following the mystic path of John of the Cross.  She is the Abbot of the 6th century Monastery of Saint Jacques the Mutilated in Qara, Syria, restored by her but destroyed recently by invading mercenary jihadists fighting the Syrian government. Founder of the Order of the Unit of Antioch, Melkite Greek Catholic Church.
Go to Original – rt.com
Click to share this article: facebook | twitter | email.

How the Syrian Chemical Weapons Videos Were Staged 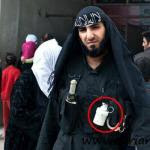 Each day new massacres committed in Syria in the name of promoting ‘democracy’ and ‘free speech’ by the same ‘humanitarian bastards’ who brought death and carnage to Iraq, Libya, Somalia, Yemen, Afghanistan.. Most of the crimes committed by US regime death squads operating in Syria under the FSA umbrella are immediately reported by all western mainstream media and accuse the Syrian state with it, western officials jump to attempt to grab some political gains then will be totally ignored once the real culprits are exposed. And if the western mainstream media does report such crimes, they immediately add their ugly justification to it: ‘The victims were Alawites, an offshoot of Shiite Islam to which President Bashar al-Assad belongs’ like how Fox News reported this one, as if it’s allowed to kill them for their belief, or their support of their president?! The other crimes where mainstream media cannot build on due to overwhelming evidence of Obama’s thugs involvement are never reported and people’s lives seems not important at all for the same sudden lovers of Syrians. In the early hours of Thursday, 19th of September, at least 9 civilians were killed and a number else injured when 2 minibuses and a pickup truck were blown up by Obama Thugs, commuting to their work and colleges in Homs near Missyaf in the province’s countryside. The thugs planted a number of IEDs, improvised explosive devices, Obama’s death squads preferred method for killing in Iraq and other places where the ‘democracy’ NATO-style was ...  END_OF_DOCUMENT_TOKEN_TO_BE_REPLACED
Posted by eirenae at 9:46 AM No comments: