Since 2001 Western Imperialism has caused a death toll of more than 1,7 million people in Afghanistan, Irak, and Pakistan. This terror has been phrased as „war against terror“. According to the Norwegian peace researcher John Galtung between 12 and 16 million people have been killed by the US-empire since 1945. Since 1948, Israel, the imperial bridgehead in the Middle East, has wiped out from the map 90% of historic Palestine. In 2011 Libya was attacked by NATO in the course of rebellions in its neighbouring countries Tunesia and Egypt. Today it is Syria that is on the agenda.

The plans of the imperial warlords are in the open, accessible to the world. US-general and late NATO-commander in chief Wesley Clark has announced this with all necessary clarity. Only a couple of weeks after september 11th 2001 the US general staff has been instructed to bring about Regime Change in 7 countries: Iraq, Lebanon, Libya, Somalia, Sudan, Syria and Iran. Commenting the attack on Lebanon in 2006 ex-Secretary of State, Condolezza Rice spoke of the birth pangs of a New Middle East.

We stand up and say stop this procedure. The crimes must be put to an end. We refuse to obey imperialism and its murderous lust for Regime Change!

Our call of January 2012 is still valid:

Stop preparing for war! Halt the embargo policy!
Solidarity with the peoples of Syria and Iran!

These have been the results of US and NATO war policy by now: ten thousands of people killed, a traumatized population, the infrastructure being destroyed to a large extent and a failing state. These are the results of a war being led by the USA and NATO in order to plunder riches of Libya and to put it back into the status of a colony. Now they are openly preparing for war against Syria and Iran, countries of strategic impoortance and rich with natural ressources. These two countries have ben following a policy of independence, refusing to obey orders issued by dictating powers. Attacking Syria or Iran can, however, lead to direct confrontations with Russia and China wit h uncalcualable consequences.
Ongoing threats of war, the deployment of military forces alongside the borders to Syria and Iran as well as acts of sabotage and terror executed by infiltrated special forces who are orchestrated by the USA and other NATO-states in concordance with Israel keep the two targeted countries in a constant state of emergency, meant to destabilize and eventually destroy them. In such a cynical manner, contemptuous of human rights the USA and the EU try to systematically paralyze the foreign commerce and monetary transactions. This policy aims at delibately causing profound disturbances of the Syrian and Iran ecnomy, augmenting the numbers of unemployed pesons and reducing the level of supply with neccessary goods. Social and ethnical conflicts are to be sharpened that way, a civil war is to be instigated as an eventual pretext for a planned military intervention, This kind of embargo policy is systematically supported by German Federal Government.

We therefore call on all citizens, churches, parties, unions, the peace movement to oppose such war policies with all due consequences. We call on the German Government to:

It is the souvereign right of the peoples of Iran and Syria to exclusivley decide upon the framing of their politicial and social orders . The maintance of peace demands that the principle of non-interference in the inner affairs of nations be respected.

We call to further support this call!

(Remark of translater: I miss a reference to the UN-Charter that calls for the peaceful solvation of all conflicts between nations and provides the necesary machinery for doing so. Even threateing with violence is outlawed and the respect for national sovereignity mandatory.)

Posted by eirenae at 6:05 AM No comments: 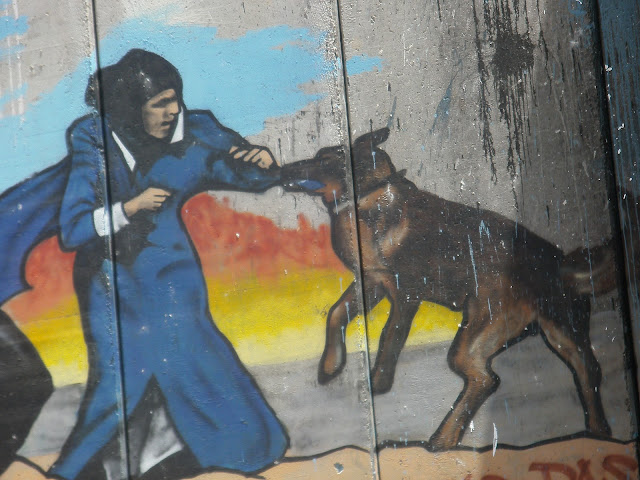 Painted onto the unholy wall near Bethlehem

Many good  reasons to get involved in the overdue anti-imperialist struggle in the year 2013. Let's just do it. May the New Year provide us with the necessary strength, and energy. Will it supply health and care, paid  jobs for  a livable income and  solidarity on a national and international scale.

Posted by eirenae at 3:51 AM No comments: