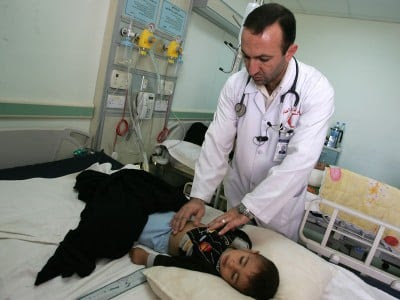 GR Editor’s Note
The ISIS is responsible for countless atrocities according to the UN report.
What the report fails to mention: Who is behind the ISIS terrorists, who is funding them, who is recruiting them?
What is the role of America’s allies: Turkey, Saudi Arabia and Israel?
In liaison with Washington and Brussels, Turkey and Saudi Arabia are involved in the training and recruitment of terrorists. Israel provides logistical support  to the terrorists  out of the Golan Heights
The report also fails to acknowledge the civilian deaths which are the result of the US sponsored bombing campaign initiated by president Obama in August 2014. Amply confirmed the US led coalition is protecting the ISIS terrorists.  The ISIS assassinations are targeted: professionals, doctors, teachers, lawyers, public officials, journalists. Who provides them with the list? ISIS is an intelligence asset. It has special forces within its ranks.
According to the Chicago Post, which refutes its own lies:

“A year into the Syrian rebellion, the US and its allies weren’t only supporting and arming an opposition they knew to be dominated by extreme sectarian groups; they were prepared to countenance the creation of some sort of “Islamic state” – despite the “grave danger” to Iraq’s unity – as a Sunni buffer to weaken Syria. (Chicago Post, November 6, 2015)

The above, is a statement of the mainstream media which confirms that the US is supporting a terrorist entity in violation of international law.
The UN has a responsibility to identify the State sponsors of terrorism.
Michel Chossudovsky, January 19, 2016
*     *     *
A UN report released today details the severe and extensive impact on civilians of the ongoing conflict in Iraq, with at least 18,802 civilians killed and another 36,245 wounded between 1 January 2014 and 31 October 2015. Another 3.2 million people have been internally displaced since January 2014, including more than a million children of school age.
Of the total number of casualties, at least 3,855 civilians were killed and 7,056 wounded between 1 May and 31 October last year – the period covered by the report, although the actual figures could be much higher than those documented. About half of these deaths took place in Baghdad.
The report, compiled by the UN Assistance Mission for Iraq (UNAMI) and the Office of the High Commissioner for Human Rights (OHCHR), is based largely on testimony obtained directly from the victims, survivors or witnesses of violations of international human rights or international humanitarian law, including interviews with internally displaced people.
“The violence suffered by civilians in Iraq remains staggering. The so-called ‘Islamic State of Iraq and the Levant’ (ISIL) continues to commit systematic and widespread violence and abuses of international human rights law and humanitarian law. These acts may, in some instances, amount to war crimes, crimes against humanity, and possibly genocide,” the report states.

“During the reporting period, ISIL killed and abducted scores of civilians, often in a targeted manner. Victims include those perceived to be opposed to ISIL ideology and rule; persons affiliated with the Government, such as former Iraqi security forces (ISF), police officers, former public officials and electoral workers; professionals, such as doctors and lawyers; journalists; and tribal and religious leaders. Others have been abducted and/or killed on the pretext of aiding or providing information to Government security forces. Many have been subjected to adjudication by ISIL self-appointed courts which, in addition to ordering the murder of countless people, have imposed grim punishments such as stoning and amputations.”

The report details numerous examples of killings by ISIL in gruesome public spectacles, including by shooting, beheading, bulldozing, burning alive and throwing people off the top of buildings. There are also reports of the murder of child soldiers who fled fighting on the frontlines in Anbar. Information received and verified suggests that between 800 and 900 children in Mosul had been abducted by ISIL for religious education and military training.
“ISIL continued to subject women and children to sexual violence, particularly in the form of sexual slavery,” the report states.
The report also documented alleged violations and abuses of international human rights and international humanitarian law by the Iraqi Security Forces and associated forces, including militia and tribal forces, popular mobilization units, and Peshmerga.
Concerning reports have been received of unlawful killings and abductions perpetrated by some elements associated with pro-Government forces. “Some of these incidents may have been reprisals against persons perceived to support or be associated with ISIL,” the report states. “Moreover, as civilians move around the country, fleeing violence, they have continued to face Government restrictions on their ability to access safe areas. Once they reach such areas, some have experienced arbitrary arrest in raids by security forces and others have been forcibly expelled. The conduct of pro-Government forces’ operations raises concern that they are carried out without taking all feasible precautions to protect the civilian population and civilian objects.”
The discovery of a number of mass graves is documented in the report, including in areas regained by the Government from ISIL control, as well as mass graves from the time of Saddam Hussein. One of the mass graves uncovered reportedly contains 377 corpses, including women and children apparently killed during the 1991 Shi’a uprisings against Saddam Hussein in the east of Basra.
The Special Representative of the UN Secretary-General for Iraq, Ján Kubiš, said “despite their steady losses to pro government forces, the scourge of ISIL continues to kill, maim and displace Iraqi civilians in the thousands and to cause untold suffering. I strongly reiterate my call to all parties to the conflict to ensure the protection of civilians from the effects of violence.”
“I also call on the international community to enhance its support to the Government of Iraq’s humanitarian, stabilization and reconstruction efforts in areas liberated from ISIL, so that all Iraqis displaced by violence can return to their homes in safety and in dignity and that affected communities can be reestablished in their places of origin,” he said.
“I urge the government to use all means to ensure law and order, necessary for the voluntary return of IDPs to their place of origin – a task of primary importance given the recent wave of violence and killings, often of sectarian nature, notably in Diyala and Baghdad,” SRSG Kubiš said.
UN High Commissioner for Human Rights Zeid Ra’ad Al Hussein warned that the civilian death toll may be considerably higher, and called for urgent action to rein in the impunity enjoyed by the vast majority of the perpetrators of violence.
“Even the obscene casualty figures fail to accurately reflect exactly how terribly civilians are suffering in Iraq. The figures capture those who were killed or maimed by overt violence, but countless others have died from the lack of access to basic food, water or medical care,” the High Commissioner said.

“This report lays bare the enduring suffering of civilians in Iraq and starkly illustrates what Iraqi refugees are attempting to escape when they flee to Europe and other regions. This is the horror they face in their homelands.”

The High Commissioner also appealed to the Government to undertake legislative amendments to grant Iraqi courts jurisdiction over international crimes and to become party to the Rome Statute.
The full report is available on
http://www.ohchr.org/Documents/Countries/IQ/UNAMIReport1May31October2015.pdf

Posted by eirenae at 9:26 AM No comments:

Posted by eirenae at 9:23 AM No comments: