Seymour Hersh: "US was planning to remove Assad and install Daesh (ISIL) terrorist group in office in Damascus"

American writer and political analyst Daniel Patrick Welch has called US investigative journalist Seymour Hersh’s latest article “a bombshell.”
Hersh revealed in a lengthy article, published Sunday in the London Review of Books, that the US military defied Barack Obama on the ouster of the Syrian president, which, if true, would be a truly unprecedented revelation.
The article says the US was planning to remove President Bashar al-Assad from power and install the Daesh (ISIL) terrorist group in office in Damascus.

Such a move would have resulted in a confrontation with Russia, but the then US Joint Chiefs of Staff, Gen. Martin Dempsey, defied Obama and prevented such a war, according to Hersh.
Comment in to Press TV on Tuesday, Welch said, “Seymour Hersh has been dropping bombshell after bombshell for years…The one caveat that people seem to have on this is that he relies heavily on one source, this Defense Intelligence Agency Director Michael Flynn, or whoever he is."
"But certainly the main point that the US knew that they were arming and the CIA knew that they were arming ISIS [ISIL] and other groups is non-story, that part is a no-brainer, a case of the right hand knowing what the right hand is doing,” he added.
“The other part about the upper echelons of the military actually defying him [Obama] and going behind his back is quite the bombshell, and that is an amazing story,” he continued.
“He has been right on everything else. So I trust his judgment. But of course this is treasonous to actually actively defy a commander-in-chief, but it’s a kind of treason history likes, you know like the Soviet sub commander who countermanded a launch code in the Cuban missile crisis to probably save the world from nuclear annihilation,” he stated.
“Now, sometimes people have to think, and Obama does not think. He is not a thinking president. He has given over his entire presidency to the neocons – really sociopathic leadership, either that or he is in cahoots with them--it doesn’t really matter. He is the laziest, most cowardly person ever to sit in that chair. It’s a travesty, it’s a really sad historical fact, and it will be seen that way historically,” the analyst noted.
He went on to say that Obama "has a no vision, no spine, and no ability to stand up to these horrific forces that are arming head choppers -- I mean, we've been following this story for thirty years. It's nothing new: the CIA and the Pakistani ISI and Mossad and the Saudis and the Qataris -- all joining in cahoots to fund and train and arm globalized, militarized [Takfiri terrorism]. Which is not a thing. It is only a thing in the imagination and the machinations of the Western elite."
"There is no way this could exist without massive funding from outside, starting with Carter and Brezhinski in Afghanistan in the 80s, right up to today. And of course all the other death squads that Israel and the US have contrived to start, as the US has done throughout Central America, and Africa with the assassination of Lumumba -- this list goes on and on and on," he observed.
Welch said that “it is a bombshell from Seymour Hersh, and a welcome one. I hope he is right.”
“You know, the military  -- within -- like Seven Days in May, the old movie – this is a fantastic story – that the military said, ‘Whoa, wait a minute! This is insane to keep doing this to insist on this Cold War crap that Assad must go, and leave another hellhole, death filled chasm in another failed state in the Middle East like what they did in Libya; and someone, people finally are standing up within the circles of government, and that is a very welcome sign,” he observed.
“I don’t know how far this will go, but the rest of us are chomping at the bit, and waiting for somebody somewhere in power to wake up,” the political pundit concluded.
Source: 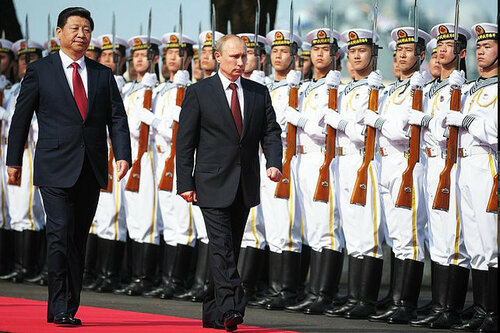 The US is confronting China, and the fact that conflict is looming closer is hardly the fault of the Chinese whose position, in the words of Xinhua, is that «the tree craves calm but the wind keeps blowing». There is one thing certain, however: the Chinese tree will whip back if the Washington wind increases its intensity. China and Russia are aware that the world in general craves calm, but have been forced to realise that the out-of-control US military machine, in an expansionist wave of unprecedented energy, is hell-bent on global domination.
President Obama boasts that the US is «the one indispensable nation in world affairs» but he would be well-advised to exercise care in his policy of aggressive confrontation.
Washington’s war-lovers should bear in mind what Napoleon said two centuries ago, and realise that the Chinese Dragon has woken. And when Dragons wake it’s not altogether clever to threaten them. They had better beware of Bears, too.

Posted by eirenae at 8:33 AM No comments:

Posted by eirenae at 7:59 AM No comments: