Posted by eirenae at 9:08 AM No comments: 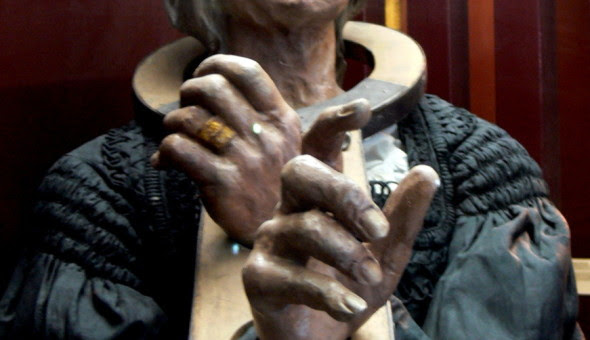 Most American readers are now probably wondering and/or worrying about their own election results. But, different as they may be, there are similarities between there and here. In the USA Republicans are loudly jubilant. Jubilation here is about an event twenty-five years ago. The joy for most people may have been justified then*. But every day and every evening endless hours of TV and op-ed columns treating us to rhapsodic notes about the clefts in the Berlin Wall have a triumphant undertone:

“We beat those red SOBs!”

Weren’t both defeats, of today’s Democrats and yesterday’s GDR, as much due to the wealth of the winners as to the losers’ loss of contact, their neglect of rapport with the feelings and hopes of much of the population?
But is there not, hidden behind the confetti, helium balloons or crowing of the victors in both Germany and the USA an occasional jarring note of worried anxiety?

A man with good reason for anxiety is Germany’s president, Joachim Gauck*. A pastor by profession, he is a skilled rhetorician and notable father figure, both suited to a position tailored to New Year’s addresses, unveiling monuments and greeting foreign kings and presidents, while Merkel and her cabinet ministers take care of the politics. The cameras usually show him with a broad paternal smile, occasionally moistened by tears when he recalls the suffering endured under that repressive dictatorial regime in East Germany, where he lived, preached (and actually got along very well) until those crucial changes twenty-five years ago opened wide new horizons – and the portals of a presidential palace in Berlin’s Tiergarten park.
But those portals – and all the celebrations – cannot shield Herr Gauck from some anxious worries. For example, a majority of Germans stubbornly oppose foreign military involvement. And he scolded, though with careful words:

“We should not use our troops too quickly, but we must not let reservations based on Germany’s past history stop us, together with the European Union, NATO and the UN, from sending them in whenever necessary to maintain a world order which permits Germany to coordinate its interests with its basic values.”

In GDR days his church, like most dissidents, demanded disarmament. But in 2012 he proudly told officers:

“Germany has taken this road since reunification… step by step changing from a beneficiary to a guarantor of international security and order… In the Balkans, along the Hindu Kush Mountains and the Horn of Africa, the Bundeswehr (German Army) is engaged in confronting terror and pirates. Who would have thought that possible twenty years ago?”

German Bundeswehr in action again since 1999

In September, at Danzig in Poland, he equated Nazi Germany’s attack there 75 years ago with current Russian policy in the Ukraine. In his usual slightly veiled yet menacing language

he threatened Putin: “History teaches us that territorial concessions often only whet the appetite of aggressors. Europe will hold to its libertarian values. We will adjust our political path, our economy and our defense preparedness to this new situation.”

He did not overly stress that his father, like his mother an early Nazi Party member, had been a loyal captain in Danzig during World War II before advancing to teach Navigation and Military Law to future officers. Doubtless to his joy, Poland, backed by NATO, is moving more troops to the Russian border, making de-escalation in the Ukraine even tougher.
German uniforms have been deployed in thirteen foreign regions since unification: over Serbia, in Kosovo, Afghanistan, in naval blockades at Lebanon and the Horn of Africa, in Turkey with Patriot missiles at the Syrian border, and in many African countries.
But still too few for Joachim Gauck!

This relates to another worry of his. Although a polled majority wants no more military adventures, only one party in the Bundestag opposes past, present and future foreign deployments; that is the Left party. And now these heretics may become, for the first time, the leading party in a German state, Thuringia! State politics are not directly tied to military matters but a Left minister-president, Bodo Ramelow, would automatically become a member and occasional chair of Germany’s Upper House (Bundesrat); his position could help legitimize his party in western Germany where age-old anti-Communist prejudices have thus far kept it to a role as despised ragamuffins, with low polling results. But Ramelow cannot easily be red-baited as a ”left-over hack from the old GDR, with Stasi connections”; until moving east in 1990 he was a proper, pious, church-going West German.
The Left won this unprecedented opportunity by coming in a close second to the Christian Democrats (CDU) in state elections, and because the badly-beaten Social Democrats (SPD) preferred gaining respect as junior partners with the Left to getting further squeezed as juniors by overbearing Christian Democrats, which had cost them half their votes. This also gave the Greens a chance to join in and get two cabinet seats. The Thuringian SPD leaders voted unanimously to take this path, then put it to a membership referendum to make a final decision. A quick and angry counterattack was immediately mounted; heading the pack was Joachim Gauck: “People of my age who experienced the GDR (East Germany, VG) will have real trouble swallowing this. We… respect decisions by the people but, all the same, must ask ourselves:

Is this party, which is to provide the minister-president, really far enough removed from ideas once held by the ruling Socialist Unity Party (GDR predecessor of the Left, VG) about oppressing its people so that we can now fully trust it? … What is this party in reality?

Not everyone was happy about Gauck’s interference. SPD Vice-Chairman Ralph Stegner said: “In controversial questions of ongoing party politics it is wise and correct to maintain reserve, for the official authority of the president depends on his maintaining distinct nonpartisanship.”
The noted Lutheran theologian and a leading dissident in the GDR twenty-five years ago, Friedrich Schorlemmer, called Gauck’s condemnation “completely absurd… Nowhere can I observe that the Left party is acting in any way outside the law of the land”.
A commentary in the important Der Spiegel Online stated:

“Now he has gone beyond the bounds of his office.”

Worse yet: He is mixing directly in the process of forming a government in Thuringia, during a referendum among SPD members on whether their party should negotiate a Left-SPD-Green coalition … In a free election the citizens gave the Left, the SPD and the Greens a slim majority in the legislature. A coalition between Christian Democrats and SPD could also rule by an equally slim majority. The coming suspense-filled weeks will decide who is to become minister-president. That is democracy. Joachim Gauck has done it no service.“

The SPD membership has since given the three-way coalition a go-ahead signal with nearly 70% approval. Despite Gauck! A special congress of the Left has done the same; the new coalition now seems very likely. This will strike a blow against the worst of German caveman-rightists, but may also raise questions as complicated as anthropologist debates on how many Neanderthal genes remain today in Europeans’ cell structures. The SPD, and even more the Greens, will exact a price for joining a Left-led government which they can upset with a single No-vote. They want Ramelow’s party not only to vigorously condemn the GDR and join in building monuments and revamping museums in this spirit, but to suppress any members who refuse to reject all the GDR stood for, good or bad.

This reminds me personally of the old red-baiting era of Joe McCarthy and the HUAC. And it brings to mind that it was the SPD and the Greens who nominated Gauck for the presidency, pressuring other parties to back him and almost hysterically denouncing the Left for refusing to do so. As Germany’s leading anti-Communist and anti-progressive, he had gained fame as first “Federal Commissioner for Stasi Records” from 1990 to 2000. Hatred of the Stasi – fostered far, far more intensely than any ever directed at Nazi war criminals in leading positions – was constantly enflamed anew by Gauck, and his unceasing witch-hunt against many, many thousands, some undoubtedly nasty, others by no means so, destroyed countless livelihoods and led to not a few suicides. For some Social Democrats and Greens he has become a Frankenstein monster. But not for others, like Katrin Göring-Eckardt, chairperson of the Green caucus in the Bundestag, who also supported military measures against Libya, in Syria and Iraq and went all-out in backing the Maidan coup and demanding pressures against Russia. She said:

“Gauck has done just the things we elected him to do.” Göring-Eckaardt , Green Party

Such a coalition requires lots of compromising. The promised gains – perhaps changing the whole political map – are tempting indeed. But also worrisome. On the national sphere, the Left cannot forget that both SPD and Greens support Germany’s expansive, increasingly military role in the world – as junior partner (if occasionally friendly rival) of the USA – from Kabul to Kiev and maybe Kobani.

While both parties are so outspoken about missing rights and democracy in the GDR, they hardly raise such issues in coalitions with a CDU which supported Generalissimo Franco, the Chilean killer Pinochet and South African apartheid, but never rejected the overwhelming influence of a company like BASF, a main manager and profiteer at Auschwitz and now the world’s largest chemical company, or the Deutsche Bank, Hitler’s financier, which evicts families as distant as Akron, Ohio with phony mortgage claims, while evading taxes in oases like Luxembourg. Insistence on total rejection of everything in the GDR has little to do with human rights.

More Frightening Results in The Future?

They hope rather for weak-kneed colleagues who will also retreat from consistent, courageous ideals like a world without exploitation, without yawning income gaps, without destruction of earth, sea and air and without constant military conflicts. Some call this socialism. After their own sad abandonment of such goals, they seek to see them stifled, if possible, even within the Left party, their only important remaining harbinger. Will the Left in Thuringia (and elsewhere) compromise such principles to gain advantages in party politics? Many stubbornly refuse to which, behind the scenes is one key reason for all the helium balloons and other glorious features at commemorations of the opening of the Wall.
As for Gauck, whose smiles will often shine down on the celebrations, it now seems that he himself once worked secretly – and on a friendly basis – with the Stasi. Yet I have a feeling that such incredible hypocrisy – and many such problems of victory or defeat – are by no means restricted to Germany.
* Thanks to Victor Grossmann – Berlin Bulletin No. 78, November 7, 2014. Grossman is  of US and Jewish decent. He  lived and worked as a journalist in the GDR (Headlines  and  careful editing by I. Eckert, AKF)
siehe: http://akf-europe.org
Posted by eirenae at 1:13 AM No comments: