Syrian Forces Push Line of Engagement to Gates of Palmyra

Prevent Spread of ISIS Plus Growing Migrant Crisis: Stop US and Partners

The threat of war is on the rise. After wars of aggression against Yugoslavia, Afghanistan, Iraq, Libya and Syria, steps have been taken for war against Russia. The encirclement of Russia with military bases, the expansion of NATO to the east, the construction of a U.S. missile defense shield, and „Western“ operations in Ukraine are part of this confrontation. „We are at war, and this war can become total war,“ declared the French President Hollande in February 2015. The danger of another world war exists. When an atomic-armed Russia finds itself under attack, as ex-State Secretary Willy Wimmer said in November 2014, “Nothing will be left of us.” Therefore, for all the forces of peace there is just one choice: to say NO! Germany needs to step out of the imperialist structures of the war. Phasing out of NATO is the central slogan. We therefore call on the Bundestag and the German Federal Government:

Bow out of the NATO Treaty!

The Bundestag (Parliament) has the power to decide this, because „Any Party may cease to be a Party one year after its notice of denunciation has been given to the government of the United States.“ That’s from the North Atlantic Treaty in Article 13. Germany dare not remain any longer a member in an organization that is dominated by the policy of U.S. imperialism, the main threat to world peace. Germany must be neutral.

End the Convention on the Presence of Foreign Forces!

The Convention on the Presence of Foreign Forces in the Federal Republic of Germany of Oct. 23, 1954 allows some NATO countries to use West German territory for militarily deployment. This has been in effect since the completion of the Two Plus Four Treaty, but it may be terminated with a two-year period under an agreement (Exchange of Notes dated Sept. 25, 1990). The German Federal Government must immediately take this right seriously. The territory and airspace of Germany should no longer be abused for U.S. and NATO wars of aggression. The secret facilities must be closed. Spying must be terminated. No limitations of sovereignty – in particular no, allow the acts of war to go out from German soil!

According to Stratfor chief George Friedman, the aim of the United States for more than 100 years has been to prevent an alliance of Germany with Russia. That cannot remain a mainstay of German policy. Instead what must apply is: No sanctions against Russia, but understanding and cooperation for the benefit of all peoples of Europe; No support for a government in Kiev that came to power t through a coup with the help of fascists and that promotes anti-democratic tendencies and anti-Russian hatred. No eastward expansion of NATO and the European Union.

This includes: End all Bundeswehr (German Armed Forces) missions abroad. Prohibit German arms exports in general. Banish nuclear weapons from German soil; end the „nuclear sharing.“ Outlaw „extrajudicial executions“ with drones. End the policy of extortion by economic sanctions, as is currently used also against Syria and Iran. No longer cover up the internationally wrongful actions of Israel against the Palestinian nation in the name of „German raison d’état,“ but stand up for a just peace. Demand an independent international investigation of the crime of 11 September 2001. Defend international law. Use the United Nations in its function as a collective security system. Don’t battle refugees but battle the causes of their flight.

This includes: Withdrawal from the negotiations on a so-called transatlantic free trade agreement (TTIP), which has the purpose, essentially, to newly coordinate the „Western“ power bloc against rivals such as China and Russia and enforce neoliberal diktats against the sovereignty and democratic self-determination of peoples. This includes the repeal of all EU standards, allowing big business to destroy entire economies, such as in Greece. The BRICS and other emerging countries could be new partners. Finally, exiting from the EU must not be a taboo. The anti-social development within the EU has led in Germany to 1 percent of the population owning more than 60 percent of the country’s financial assets; this must be changed.

GERMANY OUT OF NATO – NATO OUT OF GERMANY

'Life in Syria' ep.2: Music continues to function in time of war

CCTV.com
05-27-2015 05:20 BJT
Share this: Share on twitterShare on facebookShare on sinaweiboShare on emailMore Sharing Services
It has been more than four years since the civil war in Syria began. So far, over 220,000 people have been killed. Today we present you the second of a five part series looking at the suffering of the Syrian people during this period.
CCTV correspondent Alaa Ebrahim reports on an all-woman band that has not been overshadowed by the gloomy war atmosphere. They just got back together after years of inactivity, and their first concert in three years is sold out.

An age old piece, this musical piece was written in the ancient Phoenician kingdom of Ugarit. Three thousand years on, it is played in the Syrian opera house by an all women band named after another ancient civilization kingdom, celebrating the band second launching.

An all women band that started in 2006. But when war hit Syria, it spelled the end for the 60 musicians orchestra.

Today, the band tries to start again, almost from scratch, in a Syria unlike that of before. Many of the musicians have left the country immigrating for a better life or for safety. Others simply can’t make the trip from their houses to the concerts and rehearsal in the increasingly dangerous streets.

"When we wanted to start the band again as security conditions improved gradually, I found out that 30 of my players had left the country. Today we struggle with the stress and anxiety from the war as we started the band again when we met again for the first time we all wanted to work and live again to signal hope that life could go back to normal," said Ra'ad Khalaf, Conductor & Founder of Mari Orchestra. 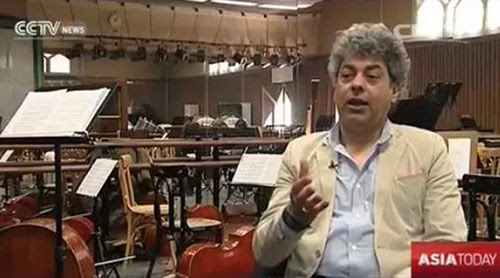 Ra'ad Khalaf, Conductor & Founder of Mari Orchestra
The rehearsal starts and on the charts today ; Music from the Godfather movie : the epic story of violence , crime and power. And the similarities between overseas fiction and domestic fact seems haunting.

A simple thing like coming to rehearsal could be troublesome especially for women like Nora a 23 year old student at the Syrian prestigious higher Musical institute . 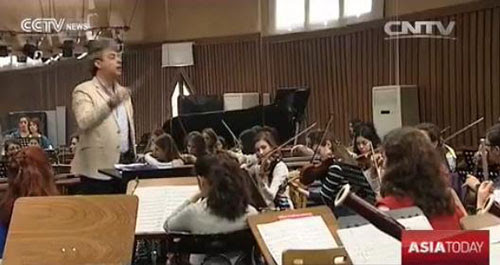 The all women band in rehearsal
During the intermission, CCTV reporter finds out more about one of the lead violists in one of Syria’s most prominent bands.

"In days when there are mortar attacks or car bombs my parents refuse to let me leave the house, in other days i negotiate with them to come practice, i want ti finish my studies so i might have to travel abroad like many friends and colleagues," said Nora Salibi, Musician.

The Music starts again this time playing a waltz from the Swan Lake , maybe this piece reflects the girls' dreams of a better and calmer future

The theater that the band is rehearsing in has been hit by mortar attacks for several times in the past two years, but the music continues a reminder that even a country at war like Syria, the show must go on. 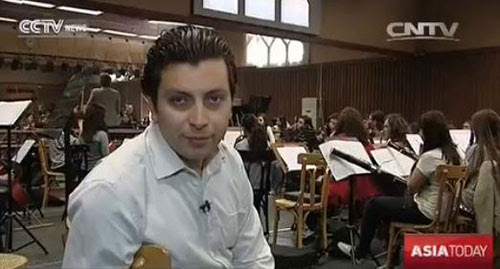 CCTV reporter Alaa Ebrahim in the interview
Posted by eirenae at 9:56 AM No comments:

Posted by eirenae at 8:44 AM No comments:

Posted by eirenae at 8:40 AM No comments: