Posted by eirenae at 4:20 AM No comments: Syria’s President al-Assad doesn`t rule out US-led attack on Syria. Syria’s President Bashar al-Assad said yesterday that he has not yet ruled out the possibility that the United States launch a military strike on his country Syria, despite the US-Russian agreement on the destruction of Syria’s chemical weapons arsenal and the joining of the Chemical Weapons Convention (CWC) by the Arab country.  END_OF_DOCUMENT_TOKEN_TO_BE_REPLACED
.....In terms of the statements by Syria’s President Bashar al-Assad from yesterday about the still present possibility that the United States under lead of the Nobel Peace Prize Laureate Barack Obama launch a military strike against Syria, it is certainly to mention that the upcoming resolution at the UN Security Council (UNSC) will actually include a reference to the Chapter 7 of the UN Charter. 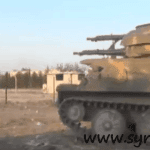 Sergey Lavrov: Russia concerned about Syria’s Integrity. While the new interview by the Washington Post with Russia’s Foreign Minister Sergey Lavrov is very interesting and Lavrov states some reasons why Moscow seems to support Syria, the Islamic Republic of Iran has called on all supports of the terrorist groups and extremists in Syria to correct their strategic mistakes and to stop the backing of armed thugs and Takfiri terrorists in the Arab country.  END_OF_DOCUMENT_TOKEN_TO_BE_REPLACED

......  the Iranian official also mentioned the Israeli regime in Tel Aviv during his meeting with the Syrian envoy to Tehran. Larijani said in terms of the Israeli regime that the main threat to the Middle East lies in the ongoing occupation of Arab territories by the Zionist entity (Israel), besides the many nuclear and chemical weapons in Israel, which represent a huge threat to the entire region.

Posted by eirenae at 3:28 AM No comments: