Source:Xinhua Published: 2016/11/20 10:57:25
0
Chinese President Xi Jinping on Saturday called for joint efforts by China and Russia to push forward the process of the Free Trade Area of the Asia-Pacific (FTAAP).

Xi told his Russian counterpart Vladimir Putin at a bilateral meeting that both sides should fully implement the consensus reached at the 2014 APEC Beijing meeting and other meetings in recent years.

The FTAAP process was launched at the 2014 Beijing meeting and a roadmap was endorsed. A collective strategic study on the FTAAP was conducted subsequently, as agreed by the APEC members, and the result should be reported to the economic leaders by the end of 2016.

Delivering a keynote speech at the APEC CEO Summit earlier Saturday, Xi called for concerted efforts to advance the construction of the FTAAP, noting that it is a strategic choice concerning the long-term prosperity of the region.

Holding talks with Putin on the sidelines of the meeting, Xi underlined the need for China-Russia cooperation under the APEC framework in a bid to promote the bloc to contribute more to regional and global economic growth.

Echoing Xi's remarks, Putin said Russia and China should strengthen coordination and collaboration in APEC and other multilateral mechanisms.

As for China-Russia all-round strategic coordination, Xi said that it has not only promoted both countries' development but also strengthened the force of world peace and justice.

The Chinese president called on the two neighboring nations to enhance synergy of their national development strategies, and further integrate the construction of the Belt and Road Initiative and the Eurasian Economic Union (EEU).

He also expressed hopes that both countries will successfully organize the China-Russia Media Exchange Year and other important people-to-people and cultural exchanges.

Putin, for his part, said the high-level relationship between Russia and China is very significant for global peace and stability, noting both sides should maintain close contact.

Hailing good momentum of bilateral economic ties and achievements they have scored in high and new technology, the Russian president stressed that Russia is looking forward to working with China to strengthen collaboration between the Belt and Road Initiative and the EEU.

The two heads of state also made in-depth exchange of views on other international and regional issues of shared concern, agreeing to safeguard peace and security in Northeast Asia, Central Asia and other regions neighboring their two countries.
Posted in: DIPLOMACY,LATEST NEWS,NEWS 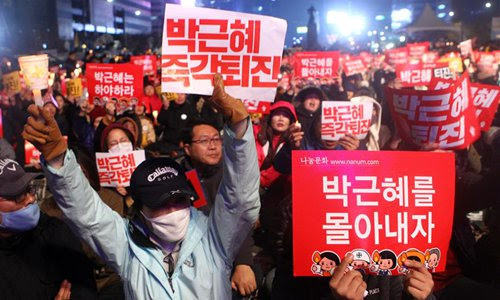 
Almost one million South Koreans marched on Saturday night to demand the resignation of President Park Geun-hye over her biggest political scandal since she took office in February 2013.

Organizers said about 600,000 protesters took to the streets in central Seoul. It was half of last Saturday's rally in size that drew over 1.3 million and surpassed the June 1987 protest against then military dictatorship.

Instead of joining the Seoul demonstration as seen a week earlier, residents outside the capital city chose to hold separate rallies in their respective hometowns.

According to the estimate by organizers composed of about 1,500 civic groups, some 350,000 people held candlelight vigils in around 70 locations across the country.

This Saturday was the fourth protest rally since the scandal involving President Park and her decades-long confidente burst into a fit of rage last month.

Choi Soon-sil, whose friendship with Park dates back to the 1970s, and two former presidential secretaries are scheduled to be indicted by prosecutors on Sunday. Choi is suspected of interfering state affairs behind the scenes.

Public alienation from the Park administration was especially evident in the country's southeast regions, which are traditionally a political home turf for Park and her ruling Saenuri Party. The regions presented multiple election victories to them since Park entered the political sphere in 1998.

In the southeastern port city of Busan, over 50,000 people gathered on the streets with candles in hand. Over 12,000 protesters marched in the southern city of Daegu, according to local cable news channel JTBC.

Daegu is described as a political hometown of the president, who entered politics by being elected a lawmaker in the city.

Most of the hopefuls demanded President Park immediately step down, while Lee Jae-myung, mayor of Seongnam city in Gyonnggi province, maintained his position that procedures to impeach the president should be launched immediately.

The Seongnam mayor's support rate recently jumped to the double digits on his active participation in the protest rallies.

Choo Mi-ae, chairwoman of the No. 1 opposition Minjoo Party, said in her speech in Seoul that President Park will be described as "the worst traitor" in history as the president with an approval rating of 5 percent pushes for a military intelligence pact with Japan, the country's former colonial ruler.

Park's approval scores stayed at 5 percent for three weeks in a row, the lowest for any South Korean president, according to a weekly public opinion poll by Gallup Korea.

The president is widely believed to chair a cabinet meeting next Tuesday, when major government policies would be approved such as the military intelligence pact with Japan and the special prosecutor bill on the Choi Soon-sil case. It would be Park's first cabinet meeting in over a month.

People were enraged further as President Park delayed a face-to-face questioning by prosecutors to next week. Park said in her second public apology that she would accept an investigation into herself if necessary.

The prosecution office had asked Park to be investigated no later than Wednesday, requesting it once again as late as Friday.
Posted in: ASIA-PACIFIC,LATEST NEWS
Posted by eirenae at 10:49 PM No comments: 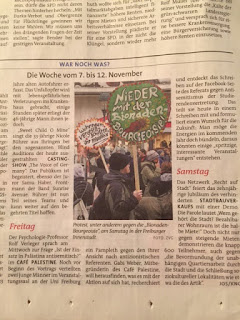