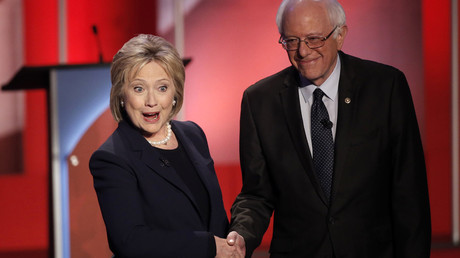 Hillary and Bernie, it’s time to start talking foreign policy
In the US, Bernie Sanders has promised to support Clinton if or when she's nominated. He, too, has voted for America's use of violence against countries when he thinks it is "right." He says Obama has done "a great job." RT.
Posted by eirenae at 3:24 AM No comments:

Obama in Cuba… History in the Faking by FINIAN CUNNINGHAM


US President Obama said his three-day state visit to Cuba was an «historic opportunity for the two countries to build relations».
As he arrived onboard Air Force One with his family, Obama announced: «I look forward to meeting and hearing directly from the Cuban people».
Such hubris. One can imagine the uproar in Washington if Cuban President Raul Castro made a similar condescending appeal to the American public, bypassing their rulers.
The New York Times headlined: «Obama lands in Cuba with a pledge to listen to its people».
It all sounds momentous and conciliatory. Sadly, it is not. US media hype belies the fact that Washington’s view of Cuba is one-sided and grotesquely distorted.
The fact is that Washington continues to impose a brutal trade embargo on the impoverished island of 11 million people. That is nothing short of economic warfare and for alleged reasons that many people can’t even remember. The official justifications for the embargo are suitably forgettable because the real reason is simply this: might is right, to crush any form of political dissent in Washington’s presumed backyard.
The US also continues to occupy Cuban territory with its military base-torture center at Guantanamo Bay.
On both counts, these fundamental violations of Cuban sovereignty are not up for discussion, according to imperious Washington.
But Cuba is expected to give way on US allegations of crimping democratic rights and freedom of speech. In any case, those Cuban offenses are relatively minor in the scale of world-class crimes committed by Washington, from its relentless subversion of foreign countries to all-out wars of aggression.
That dissonance in reality captures the nub of the problem: official US arrogance and self-entitlement to trample over weaker nations, without a hint of remorse.
Official US hubris is so rampant that Obama’s tour of Cuba is turned into a farcical narrative of Washington bringing change and hope, instead of it being a moment for Americans to genuinely reappraise their country’s history and its pernicious role in international relations.
Fawning media reports on Obama’s visit tell us it is the first time since a sitting American president visited the Caribbean island state in nearly 90 years. That was when Calvin Coolidge landed in 1928 – aboard a US warship. That little bit of information tends to be overlooked, yet it hints at the sinister background.
US-Cuba relations are indeed replete with historical significance. When the US took possession of Cuba in 1898 after the Spanish-American War, it marked the rise of Yankee imperialism in the hemisphere under which Latin American countries would be routinely carved up and subjugated to Wall Street capitalism. Dictators and death squads abounded and millions were consigned to horrific violence and deprivation.
When Fidel Castro, Che Guevara and Fidel’s brother Raul led the Cuban revolution in 1959 they managed to extricate the country from a US-backed tyrant. Like so many other US-backed despot-regimes, Cuba had been a byword for poverty and barbarity for the masses.
The Cuban revolution defied this fate and became a model for social development, a country where hunger and disease would become abolished, and where free education and healthcare were enshrined. Today, despite more than five decades of a vicious economic blockade, Cubans have a life expectancy better than most US citizens.
Socialist Cuba embraced the Soviet Union only after the island was attacked by the US in the Bay of Pigs invasion of 1961. That failed invasion was an embarrassing fiasco for the Central Intelligence Agency. Nevertheless, it was an act of war by the US against its southern neighbor.
Over the next decades, there would be countless other acts of war committed by the US on Cuba, including dozens of attempted assassinations on President Fidel Castro, acts of terror and sabotage, such as the blowing up of a Cuban civilian airliner in 1976, as well as large-scale poisoning of agricultural crops and animals.
Another historical connection conveniently omitted by mass media is that Cuba was pivotal in the rise of the modern US «deep state». The real, shadow government of the US – dominated by the military-industrial complex, Wall Street banks and corporate power – was born out of the obsession to crush the Cuban revolution.
The CIA under director Allen Dulles and the US ruling clique never forgave President John F Kennedy for refusing to send in a large-scale military invasion to salvage the Bay of Pigs debacle. JFK’s subsequent policy of rapprochement with Castro, as with other Third World revolutionary governments at the time, was seen by the CIA, the bankers and industrialists as a betrayal of American capitalism. It would cost Kennedy his life when CIA snipers blew his head off in Dallas in November 1963.
It is arguable that for the past 50 years, US democracy has ceased to exist. Presidents come and go like so much puppets, while the unelected, unaccountable deep state exercises the real power. Is it any wonder that US social conditions continue to deteriorate year after year, with poverty and inequality at runaway record levels? Because since the CIA coup in 1963, US democracy is a window-dressing charade to conceal the wielding of corporate power against the interests of the people.
Cuba is central to the hidden history of the demise of US democracy. But you would never know from reading mainstream media coverage of Obama’s «historic» visit to the island this week.
The refusal to end the US trade embargo on Cuba and return Guantanamo Bay are key indicators that Washington remains an unrepentant offender regime.

Posted by eirenae at 2:06 AM No comments:

Posted by eirenae at 1:56 AM No comments: