How Merkel’s Win May Hide Rising Discontent by Andrew SPANNAUS 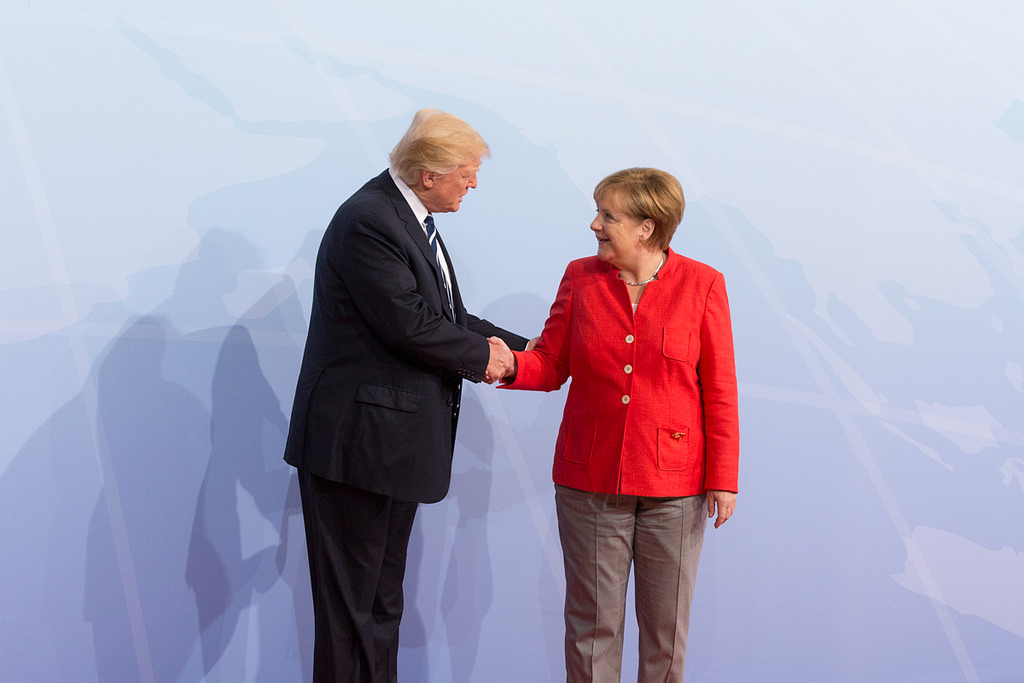 President Donald J. Trump and Chancellor Angela Merkel on July 7, 2017 (Official White House Photo by Shealah Craighead)
Germany is also expected to weather the populist storm, with Chancellor Angela Merkel set to be re-elected. Her Christian Democratic Party (CDU/CSU) now holds a comfortable lead over its main competitor, the Social Democrats (SPD), with the other opposition parties far behind. That will give Merkel, a reserved but effective politician who grew up in Communist East Germany, the chance to approach Helmut Kohl’s record as the country’s longest serving leader.
Due to the parliamentary system, which allows numerous smaller parties to send representatives to Berlin, neither of the large parties can win outright, which means that Merkel will need to form a coalition. Her preference would be to take on her party’s historical ally, the Free Democrats, but it is possible she will be forced to continue with a “grand coalition” agreement between the CDU and SPD to share power in the name of stability, while keeping out the parties seen as more extreme.
The most feared of the smaller groupings is the Alternative for Germany (AfD), a “populist” party that has grown rapidly in recent years, drawing on economic and social discontent in the mold of other anti-system parties around Europe. The AfD is expected to draw slightly more than 10 percent of the vote, well below the totals for Marine Le Pen in France (21 percent in the first round) or the Five-Star Movement in Italy (25 percent in 2013), and closer to the level of Geert Wilders’ Freedom Party in Holland (13 percent in the March elections).
Nevertheless, the AfD’s growth has caused consternation around Europe, as the governing elites struggle to explain why even in the country with the continent’s strongest economy, where unemployment is low, and productivity and budget surpluses are high, there has been a rapid increase in populist fervor.
The standard explanation, of course, is xenophobia and racism. Indeed the AfD plays to nationalist and anti-immigrant sentiment, and has increasingly identified itself with right-wing issues. As immigration from the Middle East and Africa has soared in recent years, European countries have struggled with accepting and integrating the new arrivals, causing considerable social tensions.
Germany was at the center of this crisis in 2015, when Merkel went against the grain of public opinion and announced that her country would accept hundreds of thousands of asylum-seekers in order to do its part for those less fortunate, in particular refugees from the war in Syria.
It didn’t take long for that policy to change though, as less than a year later Germany was decisive in reaching a deal with President Erdogan of Turkey that ended up limiting immigration by closing the land route towards Europe through the Balkans. The result has been a shift of migrant flows to the sea routes from Northern Africa primarily to Italy and Greece, accompanied by a notable change in attitudes among the respective populations.
Economic Inequality
As with most populist movements throughout the Western world, the issues of immigration and race tell only a part of the story. The Brexit vote was fueled by a reaction against neo-liberal economic policies, effectively summed up by the headline of an article in the English newspaper The Guardian shortly after the referendum in June 2016: “If you’ve got money, you vote in… if you haven’t got money, you vote out.” Decades of economic decline had produced the desire to stick it to the governing elites, and the Brexit vote provided an excellent opportunity to do so. 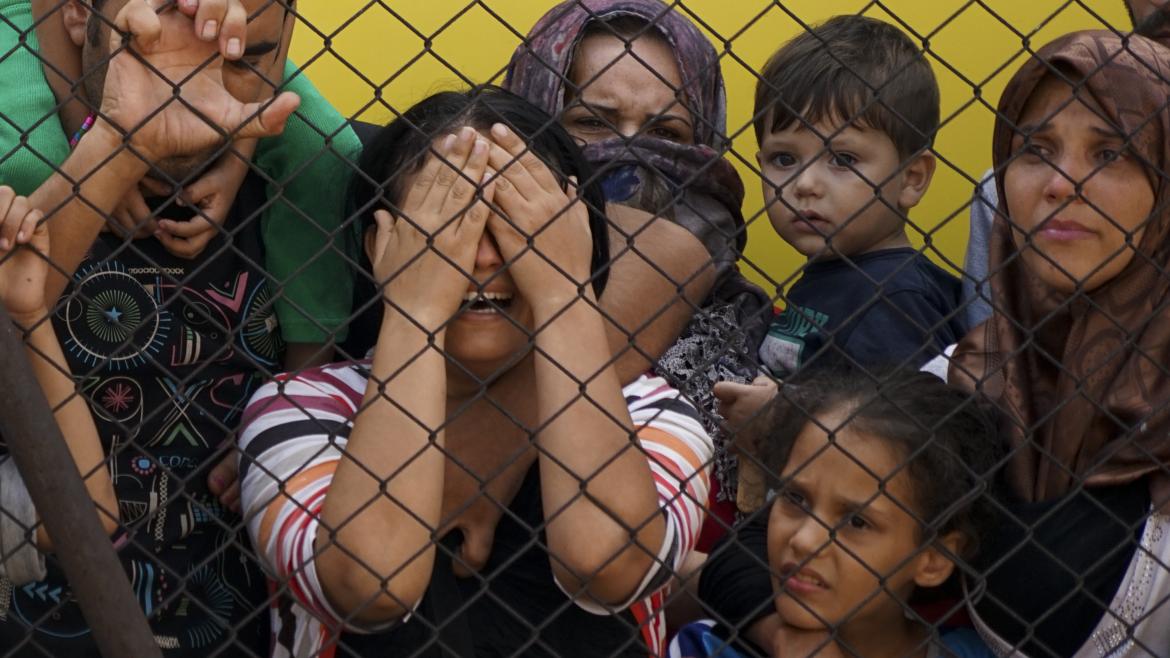 Syrian women and children refugees at Budapest railway station. (Photo from Wikipedia)
In addition, there has even been academic research demonstrating the obvious, that racial attitudes are influenced by economic hardship, which provides fertile ground for the growth of extremist parties.
The same can be said for the United States, of course, as Donald Trump’s victory was based in large part on his appeal to voters who feel left behind by globalization, and left out by a political system that has favored those at the top. Racist and anti-immigrant sentiment is clearly present, but Trump’s decisive margin came from sectors of the population such as union workers in the Rust Belt, not pro-Confederates in the South.
As for Germany, the question is where the impetus comes for the rise of anti-system political forces, beyond the standard explanation involving immigration and right-wing social issues. With the country considered to be doing so well economically, the narrative doesn’t seem to fit as well.
A clear-eyed analysis, however, makes it clear that the conditions for a revolt of the voters based on economic hardship are present there as well. First there is the eastern part of the country, the former “German Democratic Republic” which belonged to the Communist bloc dominated by the Soviet Union. Despite the claims of great success in the years following German reunification, the reality is that much of the industry in the East was cannibalized by western companies, and a large segment of the population lives on welfare.
The economy of the former Communist country was obviously inefficient and required modernization, but the approach taken by the West was to shut down and sell off whatever was available, leaving the East in a perpetual state of inferiority.
Annual reports published by the German government show that significant disparities persist between the two areas of the country, with higher unemployment, lower wages and less investment in the East. The ownership and control of Germany’s considerable industrial capacity also remains principally in the West.
Exploiting the Unemployed
A second major factor is the system of labor market and welfare reforms introduced in Germany in the 2000s. The most famous is the “Hartz IV” law, which provides unemployment subsidies of just 280 euros ($330) a month, and forces people to accept whatever jobs they are offered, even at only 1-2 euros an hour.
German companies have done very well with this system, that allows them to exploit extremely cheap and flexible labor. Critics points to this as one – although certainly not the only – factor contributing to the great success of German industry in Europe.
For the six million citizens trapped in the system though, things aren’t so great. There are entire areas called “Hartz IV neighborhoods,” indicating widespread socio-economic difficulties among the local population. If we add the high level of “working poor,” a category that has reached 9 percent of the population in Germany, it becomes clear where the populist movements can look for votes on economic issues.
What scares the elites in Europe is that political parties that criticize European Union economic policies will eventually break through, thanks to support among these segments of the population. The E.U. is in fact rightly associated with the monetarist and neo-liberal policies that have contributed to producing greater inequality and thus causing hardship for many across Europe.

In the end, Holland, France and Germany will succeed in keeping the populist parties out of government this year. (Italy will vote in 2018, and the 5-Star Movement is still challenging for the top spot.) The risk is that the European elites may take this as an opportunity to continue with their neo-liberal policies of recent years, which will ultimately only make the situation worse.
consortiumnews.com
Posted by eirenae at 5:05 AM No comments:

Russia’s Foreign Minister Sergey Lavrov has dramatically called the bluff of the US President who just hours ago threatened North Korea with regime change after North Korea delivered a strongly worded rebuttal of Trump’s UN speech at the General Assembly.
The Tweet repeated a slightly modified version of Trump’s “Rocket Man” insult.
However, while many are panicking over a war of words between nuclear powers, Sergey Lavrov has stated that the “mutually assured destruction” model of deterrence will ultimately work out in the interests of peace.
The Russian Foreign Minister stated,“Americans won’t strike Korea, because not only do they suspect, but know for sure that Pyongyang has nuclear weapons”.
He continued,“Regarding this issue, President Putin has repeatedly said it was impossible to imagine that the US or someone else has 100 percent information on all of the (nuclear) objects”.
This remark implies that Russia believes North Korea’s nuclear capacity to be stronger than many believe it to be. This is crucial as no country is fully aware of the specific nature of North Korea’s nuclear weapons capacity.
He added words of extra caution however, given the unpredictable nature of the current US President.
Lavrove said,“…the situation could spiral out of control, so that thousands, dozens of thousands, or even hundreds of thousands innocent people will suffer in South Korea, as well as in the North, certainly in Japan, with Russia and China nearby too”.
The deeply irresponsible remarks made by Donald Trump, threatening to completely destroy North Korea have many worried, but Russia’s Foreign Minister seems assured that the US is too scared to attack a country that can fight back with nuclear weapons.
This is in line with previous remarks of  Russian President Vladimir Putin who reminded the world during the recent Eastern Economic Forum in Vladivostok, that North Korea’s weapons programme is a natural result of the very legitimate fears that if defenceless, North Korea could be invaded in the way the US invaded Iraq in 2003 and Libya in 2011.
Sergey Lavrov previously referred to the war of words between Donald Trump and Kim Jong-un as a fight between children in a kindergarten.
Posted by eirenae at 4:30 AM No comments: