Posted by eirenae at 8:02 AM No comments:

Posted by eirenae at 5:50 AM No comments: 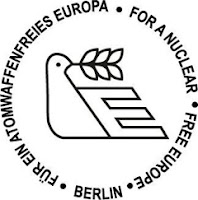 In the name of reason the German Working Circle for Peace Policy says NO to military interventionism, NO to to all efforts favouring the suprimacy of the Western hemisphere, NO to military bases abroad and No to the deployment of questionable „patriots“ near the border of Syria. We say No to the  ongoing destabilisation of yet another  beautiful Mediterranean country, a friend of the Palestinian people. We veto the terrorist attacks from hired foreign mercenaries. We do not consider them rebells, democrats  or the like. We do not call them oppoisionals or even extremists we consider them terrorists and murderers. We advocate legal methods against them and we defend International Law. We therefore stick to the letter and the spirit of the UN-Constitution and say YES to the Humanitarian Conventions build upon it. We say NO to the manifold hypocritical pretenses. We say NO to the questionable concept under name of „Responsibility to Protect“. We say NO to its  secretive formula R2P which means nothing but meddling in the affairs of souvereign countries. We veto neo-colonial efforts for „Regime Change“. This title also stands for interference in the internal matters of UN-family-members. This, we will not and must not acccept. As peaceloving people we will  defend the souvereignity of nations small and large and their legitimate governments. We reject the neocolonial idea that foreigners should decide who will govern Turkey or Syria or any other country in the world. Democracy is our shield and it must be defended at home.
Since the foundation of our working circle in the heydays of the peace-movement of the early 80ies we have been saying NO the deployment of nuclear missiles and to threats with preemptive nuclear strikes. We logically also reject the deployment of missiles near the border of a neighbouring country under the pretext to establish a no fly zone, under the pretext to forward democracy or to defend human rights. A no fly zone means war as we have seen with Libya.  Threating with war is already a flagrant violation of the UN-Charter. Even Threatening other nations with violence means breaching the UN Charter. Threatening with means of mass destruction and using them belongs to the arsenal of imperial powers. They have not hesitated to apply such lethal machinery twice at least. Accusing small nation of doing the same sounds like a macabre satireSuch accusations must be dismantled as vicious and defamatory.  A Nuclear Free Europe is on our agenda. And we also say yes to a Nuclear Free Middle East and yes a Nuclear Free World.
While defending internationala law, while defending democratic values, we also firmly demand cuts in military expenditures. Our call is for defence of human needs as our first priority. Expenses for warfare are an obstacle  to this goal. In Germany, in Europe and on all continents the peoples strive to be liberated from want and from the burden of warfare. Our late Chancellor Willy Brandt used to underline that „Peace is not everything, but everything is nothing without Peace“. The worst enemy of humankind is War itself. The War on Terror is War. Its astronomical costs are inacceptable. Home defense can never be achieved by means of terror, home defense is not very costly either. Public funds must be re-directed to help free us from want and the planet from pollution. Peaceful solutions for all conflicts can be achieved once we stop feeding the war machine and the banks. Budgets for peace is what we want.

Foreign military locations are contrary to people's needs everywhere and they  swallow heaps of tax money. In Büchel and Ramstein in Germany, in Vincenca in Italy, in Okinawa, Japan and on Jeju island in South Korea, citizens stand therefore up and say „No“ to foreign military installations. Nobody wants to host nuclear and other military devices in their backyard. Citizens say „No“ to the 30 000 starts and landings at the US-airbase Ramstein in the Rhein-Ruhr-area in Germany. They say No to the noise damage caused by the fighter bombers and  No to the lethal damage they carry to their destiny.
As an obligation from our war-ridden history only peace must start from German soil!

One more reason to say NO to the investment into 6,527 German soldiers abroad!
NO to the German military presence at 15 different theatres of crisis and war abroad!
No to the 8 billion Euro of German tax money wasted on the Afghanistan-„mission“ since 2001!
NO to 68 million Euro in 2012 for the KOSOVO-“mission“!
No to the 62 million for the  German „presence“ at the Somali cost!
And No to the 25 million for the Lebanon „mission“.

German foreign interests must no longer be defined by sanctions, threats, and military missions. We therefore call for a fundamental Change in Policy. We disagree with TINA-fatalism. Alternatives are right there. Let us pick them up. Let us learn from other nations, from other continents. In mid-April President Rafael Correa from Ecuador illustrated at the Technical University of Berlin, that  it is possible to help blossom economic growth and scientific research by putting human needs as first parameter for public decision making.
Our NO to feeding the gun-smiths, to helping arms exporters is well founded. Economic growth and scientific progress do not come with them. Producing tools of warfare is destructive and serves only the greedy interests of one percent of our societies. This tiny minority can be and must be stopped before their lethal course will lead us into another major catastrophy. It is late, but not too late.

Our Struggle Is For Life - Whereas NATO Bears Death!

This why we call upon all our compatriots and on all the peoples across the planet to join us in the struggle for peace and for a livable society, a society where women, the young and the elderly can fully participate.
Obviously, all citizens want communities that  are healthy and livable, that allow for the young generation to use their creative potentials, to develop their personalities, to perform excellently and to do so without drug-misuse. All peoples strive for an economic order under which nobody will be forced to make harmful choices. We all  together strive for a world where careers and children are compatible and both part of a meaningful and humane life. NATO with all its lethal infrastructure is contrary to a humane vision. Even its „Smartest Strategy Concepts“ can never fullfill our dreams and visions.
NATO can only secure the interests of a tiny handful of oligarchs, a handful of people, who do not want to share the natural riches of Mother Earth. It is our duty as peacmeakers to challenge those few on their road to destruction. We must help one other to understand the true nature of the NATO–alliance. We must not allow this anti-social coalition to continue bullying the world. A look at history can help. No empire has lasted forever. No matter how affluent their available resources and how powerful their military machinery, no matter how brutal their methods. They all came to an end. Contrary to its appearance of strength, the moment of truth for NATO is already on the horizon. Its wisdom has come to a dead end. Whereas its military apparatus swallows almost every tax dollar, the serious global economic crisis increases its weakness. Conflicting interests within the military alliance are growing. And we, the people need dearly butter instead of canons. We must be aware of its frailty. People need jobs, but not in the war-machine, not at the expense of the lives of our husbands, sons and grandsons, not at the expense of any life. Let us therefore join voices for the retirement of NATO . Let us  block  the road to distruction. This call is urgent if humanity is to survive.

Our coming together here in Istanbul will be a major contribution. It will help to overcome „the unjustified and unacceptable silence of the 'peace movements'“ the world over. The paper of the US-Peace Council on Syria,the Middle East and Africa issued on March 20th 2013 needs to be translated. The very precious US-document covering the „Imperialistic Military Escalations in Africa and the Middle East“ must be studied closely. It will help us to overcome the agony of our respective tired and weary movements.

No matter what our differences or our visions are, let us be clear on one thing:  Neoliberal strategies breed war and they deprive all peoples of their basic needs. We can over come these strategies and replacce them by others. Let us learn from the Latin American peoples. They have been trough all imaginable crises and they offer their experiences freely.
Let us begin organizing from scrap and if necessary on the on the smallest scale. Let us meet our neighbours in a friendly manner and share our frustration with exploding rents and barricaded roads and talk about legal ways to object. Let us have meaningful talks about real issues at workplaces among friends and in family circles. Most political parties, citizen's associations, NGOs as well as trade unions are no longer reliable, they have become more or less obsolete. The media are not helpful as they are in the hands of the one percent. They all share the neoliberal strategies. We must inventive. We can and will find ways to communicate if we now what is needed.
As war resisters and as people of vision we are bound to challenge neoliberal strategies , because its structures and needs necessarily feed into the war machine. This why organizing against war begins where basic people's needs are violated, at home, not abroad. We must visualize where our tax money goes and we must say where it should go. Moral and ethic opposition to war and military intervention are important, knowledge about international law helps a lot. But let us be vigilant. we must no longer be fooled by enemy images coined for us. We must no longer allow the humanitarian question be misused as a tool for warefare. Bombing for human rights and humanitarian military assistance are a nonsensicle concept. Humanitarian goals can never be achieved by terror and through warefare. Human rights violations must challenged at home, where we can find out names and addresses of those responsible for it and take them to court. Let us defend the law against the powerful lawbreakers. Let us learn how to speak truth to power at home and let us join voices for social justice programs in order to help meet the most urgent human needs. Our demands are simple:

Budgets for Peace! Cut the military! Feed the cities! Human needs at home first!
Invest in hospitals, schools and public infrastructure!
Respect national and international law!
Trust other nations to solve their problems and respect their sovreignity!
Withdraw „patriots“ and other military equipment from the Syrian border!
Stop funding mercenaries, thugs and terrorists!
Retire Nato!

Posted by eirenae at 5:26 AM No comments: 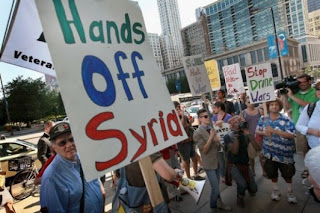 Posted by eirenae at 4:43 AM No comments:


"And there are people still in darkness,
And they just can't see the light.
If you don't say it's wrong then that says it right.
We got try to feel for each other, let our brother's know that we care.
Got to get the message, send it out loud and clear."

Opinions expressed in these links/articles are those of their respective authors.
They do not necessarily reflect my own opinion
Posted by eirenae at 3:23 AM No comments:

FACTS on SYRIA: There is absolutely no evidence or confirmation that the Assad government carried out the alleged chemical attack.