Battle of Aleppo a Stalingrad Moment


Aleppo is almost fully free.  The Syrian Arab Army, Russia and their allies have liberated one of the most important cities in the Middle East. This represents the most historically significant event in the Middle East since 2003, when Iraq was invaded and Saddam’s regime fell. It is not yet the proverbial Battle of Berlin, but it is a Stalingrad moment for the Middle East.


2003 was the beginning of a thirteen year cycle during which hell was unleashed upon the Middle East at the hands of the main NATO powers. Strong, secular, modern regimes were invaded. Cultures were eradicated, the rights of minorities destroyed. Into this power vacuum entered Islamic terrorists, the most sophisticated of which were funded by the despotic Gulf states.
Throughout this process, Syrian remained something of a ‘last man standing’ in the Arab world. President Bashar al-Assad who many dismissed as a lightweight vis-à-vis his father, has silenced all of his critics.  In life, one rarely gets to choose the timing of the occasions to which one must rise, but in rising to this occasion, Syria’s President has struck a blow against several destructive forces.
When George Bush and Tony Blair started a fake war on terrorism they couldn’t have imagined in their wildest dreams that the REAL war on terrorism would be won by the Syrian Arab Republic and the Russian Federation. There is a kind of tragic yet poetic irony to this reality.
Syria has shown its neighbours and those further afield that it is possible to successfully win the fight against barbarous Islamic terrorism.
Syria has done so with a well-trained army of patriotic individuals fighting for their homeland. Furthermore, Syria has cultivated a genuine alliance of those who respect her sovereignty and her internal political processes. Russia, Iran, Hezbollah and to an extent China, have all aided Syria in the name of Syrian survival rather than Syrian regime change. One cannot fight terrorism whilst sympathising with terrorist aims of overturning a legitimate government, irrespective of the form that government takes.
Syria has also proved that the destructive force of the NATO powers can be resisted. America, Britain, France, Germany, Holland and Belgium have had few actual victories in the Middle East. Having the manpower and the ability to recruit terrorist proxies to destroy a country’s government and infrastructure represents something of a pyrrhic victory. When it comes to actually maintaining anything resembling a country in the aftermath of such an invasion, NATO has failed spectacularly.
In Syria they tried to destroy the country, but were stopped short of regime change. This has made resisting and ultimately winning battles against terrorist occupation possible.
John Kerry, Samantha Power and Ashton Carter have tried their hardest to manipulate the diplomatic process in Syria so as to buy time for their terrorist proxies whose shared, unilateral goal is the overthrow of the Syrian government.
But whilst Russia remained largely quiet when Iraq and Libya were being destroyed, this time a collective statement of ‘enough is enough’ emanated from the Russian Foreign Ministry. Sergey Lavrov’s steadfast leadership throughout the Syria crisis has guaranteed that the diplomatic and political booby-traps set by the West would not taint the process nor hinder the efforts of the men on the ground doing the fighting.
The political victory for Lavrov’s brand of intelligent, informed, dignified and unwavering negotiating is as critical as the military victory against the terrorist forces. With Aleppo liberated, John Kerry won’t have anything left to negotiate for. All chips are off the table. Lavrov has won, Kerry has lost.
The victory in Aleppo will also send shockwaves through the region. Attempts by Saudi Arabia and Qatar to colonise the Arab world through exporting their sinister Wahhabi ideology at gun point, has hit a brick wall. Syria has shown that for all of their money and evil intent, a well-trained army of the people backed by powerful allies can stop the Gulf tyrants who must rely on terrorist mercenaries to fight their battles as their own soldiers can barely fire their expensive American and British guns.
President Erdogan’s ambitions to re-conquer Ottoman holdings in the Arab world has also been set-back. Turkey will either have to abandon her ambitions in Syria completely or else join the constructive efforts to re-build the country on the terms set by Damascus and Moscow. The likelihood is that Erdogan will continue to shift his focus to Iraq whose comparatively weak central government is less equipped to stand up to illegal Turkish incursions into the north of the country.
Finally, for those who lack a sufficiently sound heart to celebrate the victory of secular Syria over terrorism, perhaps they will have enough of a head to realise that in halting the progress of ISIS, Al-Qaeda, the Free Syrian Army and other terrorist groups, Syria has helped make the world a safer place.
I firmly believe that someday people will look back at December 2016 and recall the heroic struggle of Syria, Russia and their other allies against Islamic terrorism. They will feel shame at how their own governments have failed to keep them safe and they’ll say, thank you President Assad and thank you President Putin for doing so.
The war is not over, Raqqa, Deir ez-Zor and other eastern regions of Syria must also be liberated.  Aleppo, whilst free, will need to be rebuilt. A great deal of work lies ahead, but the tied has sufficiently turned and a decisive blow has been struck against the forces of evil.

Posted by eirenae at 2:25 PM No comments: 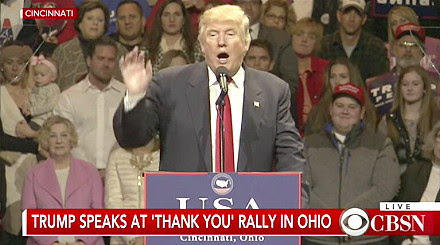 Russia-Europe Relationship: On the Threshold of New Era


Matteo Renzi resigned as the Italian Prime Minister after the people of Italy voted «no» in a historic referendum on constitutional reform on December 4. The vote results triggered a shock wave across Europe much like Brexit. It’s up to Italian President Sergio Mattarella now to decide what will happen next – an appointment of new prime minister supported by parliamentary majority or a snap election, paving the way for an anti-euro party, the 5-Star Movement, to come to power.
This political force is the biggest winner. The party wants to abandon the EU budget strictures and has said it might favor printing a parallel currency. Another popular party – the Northern League – also opposes the eurozone membership. Actually, the opponents of the reform voted against the EU. An Italian «mini Brexit» becomes a possibility. Both - the 5-Star Movement and the Northern League – call for better relations with Russia. They want the anti-Russia sanctions to be lifted.
The resignation of Mr. Renzi is a heavy blow to the EU already facing multiple crises and struggling to fend off an attack of anti-establishment forces, which are clearly on the rise in Europe. German Chancellor Angela Merkel – the unofficial European leader – is also vulnerable seeking a fourth term in 2017.
Europe is facing a prolonged period of political upheaval, with elections also slated for 2017 in Germany, France the Netherlands and, probably, Italy – all countries where economic anxiety, opposition to the EU and a surge in migration have fed growing support for populist parties. The established order is in retreat everywhere in Europe, except Austria.
Far-right leader Norbert Hofer of the anti-immigration Freedom Party was defeated on December 4 by independent candidate Alexander van der Bellen, a former Greens leader, becoming «a pro-European president of Austria open to the world.» But it was the vote when all Austrian political forces joined together against the Freedom Party’s candidate. It was «all against one» but the result was a close call.
From Moscow’s perspective, any outcome was a step forward to bolster the forces willing to improve the relations between Russia and the EU. Mr. Hofer said he wanted to recognize Crimea as part of Russia. But both candidates stood for the improvement of bilateral relations with Moscow and supported the idea of lifting the anti-Russia sanctions to mirror the popular sentiment. After all, Austria was the only EU member state Russian President Vladimir Putin visited after the Western sanctions were imposed.
At his 45, Hofer is a promising politician. Only a year ago he was the second person in the leadership of the main opposition party and a vice-speaker of the parliament. Today he is the man who was close to becoming president. All other parties of the country had to unite preventing him from winning the presidential race. That’s very indicative.
Austria will hold a parliamentary election next September. The Freedom Party has a good chance to win an outright majority of seats.
The trend is visible. The Euro-Atlantic establishment suffers one defeat after another. It started with Brexit, followed by Trump’s victory and election results in several European countries. Renzi’s setback is a good example. The Eurosceptics won in Italy and lost in Austria but Hofer’s Freedom Party is still going strong.
Brussels has each and every reason to be concerned over its future. Anti-EU forces are expected to greatly improve their positions. With Donald Trump as US President, the pro-European integration forces face big problems. Trying to hold Eurosceptics at bay, the establishment forces will willy-nilly have to shift their policies towards national interests, a lesser role for the EU and its supranational structures.
It is taking place against the background of new alliances emerging within the EU, like «Alliance of Europe’s South» or the «mini-Schengen» in addition to the already established and functioning Visegrad Group, which has its own vision of the European integration.
With Donald Trump’s priority to «America First», the EU faces the need to take care of its own security which cannot be guaranteed without normalizing the relations with Moscow. Jean-Claude Juncker, the President of the European Commission, believes that Europe should adopt its own policy towards Russia, which would not be influenced by the US. The president has said he «would like to have an agreement with Russia that goes beyond the ordinary framework, bearing in mind that without Russia, there is no security architecture in Europe». Mr. Juncker believes that «Russia must be treated as one big entity, as a proud nation».
In mid-November, Bulgaria and Moldova voted for leaders who called for lifting the sanctions and improving the relations with Moscow.
Western big business has started to re-invest in Russia. They would never risk doing it not being sure the investments were to pay off.
NATO «continues to strive for more constructive relations with Russia», NATO Secretary General Jens Stoltenberg said at a press conference on December 5 ahead of a meeting of the NATO countries’ foreign ministers. The date of the next NATO-Russia Council meeting is being discussed. More than a dozen European countries have recently expressed willingness to engage in dialogue with Russia toward reaching an arms control deal.
The calls to lift the sanctions and improve the relationship with Moscow are growing stronger. The EU has started turning toward Russia. The trend is becoming increasingly apparent. The recent events clearly demonstrate that Russia and Europe are on the threshold of a new era in the history of their relationship.

Posted by eirenae at 4:51 AM No comments: