Alibaba Billionaire: Donation of 1 Million Face Masks and 500,000 Coronavirus Test Kits to US

US to China: drop dead, we get our jobs back. China’s richest man to US: here, have 1 million masks & Covid-19 test kits

Helen Buyniski
is an American journalist and political commentator at RT. Follow her on Twitter @velocirapture23
Get short URL

Chinese billionaire Jack Ma has in one fell swoop seemingly forgiven the US for its treatment of China in the dark days of its coronavirus epidemic and one-upped the capitalist system with a donation of much-needed supplies.
The Alibaba billionaire announced a donation of 1 million face masks and 500,000 coronavirus test kits on Friday, releasing a statement calling for “all humankind” to work together to fight the recently-declared pandemic. Signing off with “united we stand, divided we fall,” Ma managed to make the US government, which all but congratulated itself on the increased business opportunities presented by thousands of Chinese drowning in their own phlegm, look like bumbling (and cruel) idiots.

Through a donation of 500,000 testing kits and 1 million masks, we join hands with Americans in these difficult times. 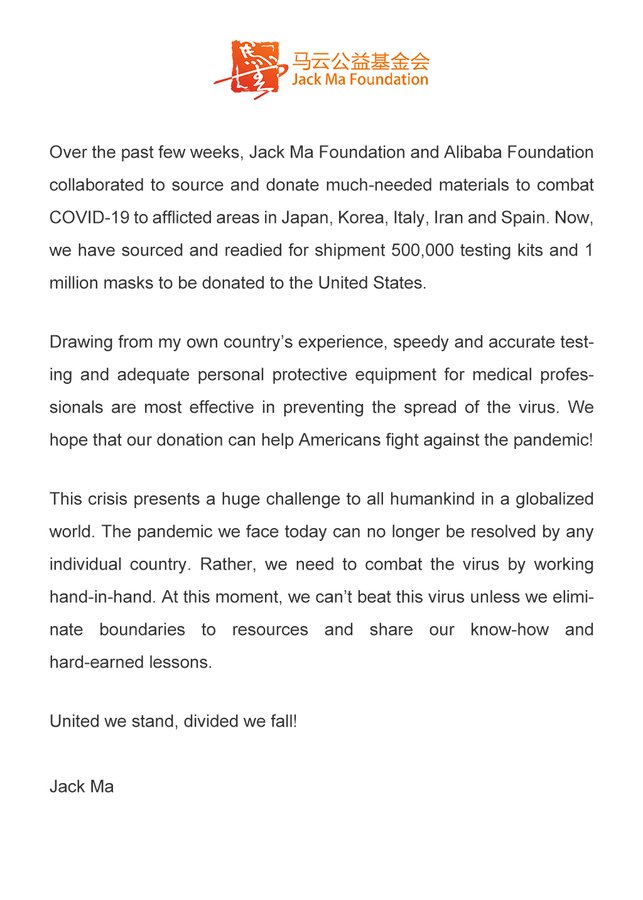 10.9K people are talking about this
The e-commerce mogul’s statement was all sweetness and light, wrapped around what could be perceived as a dig at Washington’s preparedness: “Hopefully, these supplies can help some people in the US.”

Replying to @Amy_Siskind
Jack Ma:
"Based on the counter-epidemic experience we have gained in the past months, quick and accurate test solution and protective equipment for medical workers are the key goods to stop the epidemic from escalating.
Hopefully, these supplies can help some people in the U.S."

636 people are talking about this

Many will welcome this. Some will see it as an insult. The real insult is that the richest country in the world has waged war on science and as a result is finding itself helpless...

Billionaire Jack Ma announced the decision on Friday through his account on Twitter-like Weibo. 'Hopefully, these supplies can help some people in the United States,' he said.
dailymail.co.uk

567 people are talking about this
The contrast between Ma’s gift and the US’ response to China sinking into coronavirus-flavored hell months ago could not be more stark. US Commerce Secretary Wilbur Ross all but danced on Beijing’s grave, predicting that the virus would “help accelerate the return of jobs to North America,” and while President Donald Trump himself offered praise of President Xi Jinping’s containment efforts, it was accompanied by little more than closing US airports to flights from China and the equivalent of a “good luck.”
Now that the shoe is on the other foot, the kits and supplies couldn’t come at a better time. The White House signed $8.3 billion in emergency aid into law earlier this week to fight the coronavirus, and an emergency declaration on Friday freed up $50 billion more for disaster response, but Americans nationwide have reported difficulties accessing testing, on top of concern over the mixed messages coming from healthcare authorities and the Trump administration.

Jack Ma just did more in 1 day to fight the #Coronavirus in America then @trump has done in 2 months.

Words cannot fully express how bad of a job the Republican led White House and Senate have done during this difficult time. https://twitter.com/DailyMail/status/1238456808454467590 …

117 people are talking about this
Health and Human Services secretary Alex Azar has admitted his agency has no way to track the number of Americans who have been tested for coronavirus - let alone who have tested positive - but bragged earlier this week about having a “surplus” of coronavirus testing kits awaiting order. CDC officials, however, have admitted the agency lacks the equipment needed to properly respond to the epidemic, and scrambled to get the testing right after an initial round of kits proved defective. The development of testing was further slowed by the CDC’s insistence on developing its own test rather than using that of the World Health Organization. State authorities report tests being shipped incomplete and therefore unusable. While Ma has made similar donations to Europe, Japan, South Korea, and other coronavirus-stricken parts of the world, the US healthcare system is rapidly proving to be the least able to deal with the crisis.
ALSO ON RT.COMTrump declares national emergency over coronavirus pandemic, unlocking $50bn in funding
The Trump administration has kept up its China-bashing even as the number of new Covid-19 cases in that country has dropped off. National security adviser Robert O’Brien complained earlier this week that “we could have dramatically curtailed” the epidemic if it weren’t for China supposedly dragging its feet going public, though he could only cite “open-source reporting from Chinese nationals” to back up his assertion that China’s response had cost the world two months’ prep time. Secretary of State Mike Pompeo and others have repeatedly referred to “the Wuhan virus,” while Arkansas Senator Tom Cotton went even further down the blame-China rabbit hole, insisting the disease escaped from a high-security bio-research laboratory in Wuhan.
Trump himself at least spread the blame for the “foreign virus” around a bit, criticizing the “fake news media” for hyping Covid-19 and his predecessor Barack Obama for hampering the US response by tying up the CDC in “red tape.” But he has fueled concern in his own way by repeatedly downplaying the seriousness of the virus while fretting over the cratering stock market, all but advising sick Americans to keep a stiff upper lip while trotting out a series of potential economic band-aids for the gaping wounds on Wall Street (including a bailout of the tanking shale oil industry even his own party has slammed as irresponsible).
ALSO ON RT.COMBio-war-of-words: US summons Chinese ambassador over ‘disinformation campaign’ about coronavirus origin
Perhaps unsurprisingly amid such chaos, the Trump administration has not issued an official response to Ma’s gift - though in their defense, the State Department was probably too busy summoning the Chinese ambassador to chew him out over the foreign ministry spokesman’s tweeting to notice.
Think your friends would be interested? Share this story!
The statements, views and opinions expressed in this column are solely those of the author and do not necessarily represent those of RT. 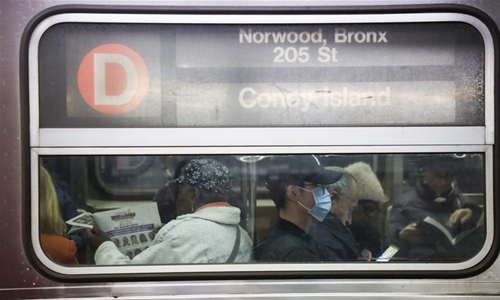 Passenger with face mask is seen in a metro train in Manhattan of New York, the US, on March 4. Photo: Xinhua

Robert Redfield, director of the Centers for Disease Control and Prevention (CDC), was asked by lawmakers when testifying in a House subcommittee on Wednesday if it’s possible that some Americans died of what on the surface seems like influenza but is in fact COVID-19. He confirmed it.

This is a very important piece of information, telling people that the state of novel coronavirus outbreak in the US is much larger than the data that has been released so far. The US just reported over one thousand of confirmed cases and more than 30 deaths. The US’ testing capacity has been far from enough to meet the demand, leading to a cover-up of the true state of the epidemic.

Several celebrities in the US have contracted the coronavirus, military personnel and congressional staff have been infected, and some politicians have been in close contact of confirmed patients. This reflects how the epidemic in the US is widespread.

President Trump said the US is more prepared than any other country to deal with the new coronavirus, and the virus will not have a chance in the US. But his promises have done little to reassure. The US hasn’t taken firm steps to expand the scope of testing, or to significantly reduce human contact. That means not only are there more infected people in the US than official number, those infected people have many opportunities to contact healthy people.

In the US, efforts to stimulate the economy seem to be moving faster than efforts to prevent epidemic, and protecting people’s lives still doesn't seem to be a top federal policy priority. But with investors lacking confidence in the US response, the stock market in the US has fallen sharply and the markets are filled with pessimism and panic.

With its inability to fight the epidemic, the US political circle has shifted blame abroad, particularly on China. US National Security Adviser Robert O'Brien has launched the latest attack on China, claiming that China initially “covered up” the epidemic, which cost the international community two months.

This is by far the most shameless remark in Washington trying to shift blame regarding the epidemic. A country's overall understanding of an outbreak is always a process, but since January 20, China's warnings of the outbreak have been deafening. The US should have used the time to step up epidemic prevention, but it apparently wasted that time, and some US politicians even used it to laugh at China and kick China down the road.

The US has a misguided policy of only suspending flights to and from epidemic-hit places. The US, which first suspended flight to and from China, now leads the way to suspend travel from European countries. But it has done little to stop the spread of community transmission, and has all but given up the efforts. The focus on the election led the administration to try to sugarcoat the fact, saying that the risk to the American people from the virus was low and there was no need to panic. Vice President Mike Pence led the federal epidemic prevention, which has had little effect.

Refusing to face up to the reality, the US federal government and some lawmakers have acted almost foolishly. They desperately blamed China for their own mistake, making them look nasty. How can the US be like this? It's not transparent. It's not realistic. More Chinese are surprised by the way they treat the election as more important than human life and the way they mess with it.

There is no point reasoning with the politicians of the US. We Chinese should do our own thing well. We should consolidate the achievements of epidemic prevention, reflect on the situation, cooperate with the world, and support the foreign countries that need our help. The novel coronavirus is a common enemy of all mankind. We don't need to be distracted by America's spats at this time. We should make our own contribution to the global fight against the epidemic.
Posted by eirenae at 7:48 AM No comments: