Russian Foreign Minister Sergei Lavrov © Maxim Shemetov / Reuters
11
The 28-member trans-Atlantic military block, along with a number of European countries, is intentionally hyping up the “myth” that Russia allegedly poses a so-called “threat” to Sweden and the Baltic states, Russia’s Foreign Minister said.
“The leaders of NATO member states and a number of European countries, especially Britain, the Nordic countries, the Baltic counties neighboring us, Poland, Romania and some others, are whipping up ‘Russia’s threat’ myth, as well as the idea that we are planning to use our nuclear weapons to intimidate Sweden and the Baltic countries,” Sergei Lavrov said in an interview with the Moskovsky Komsomolets daily.
Read more 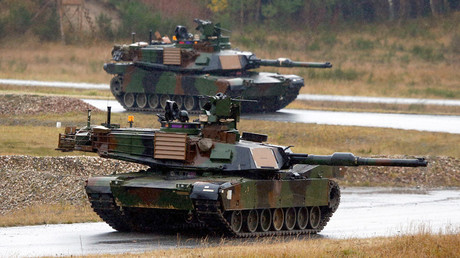 Unfounded claims? NATO ‘categorically rejects’ it threatens Russia
“There is the impression that Russia is nearly the main stumbling block in international relations, because today the dominant media sources spread news from only the Western point of view,” he added.
Despite the aggressive stance of the western media, the overwhelming majority of the countries in the world still support Russia, Lavrov noted.
The interview came after NATO chief Jens Stoltenberg had claimed that, despite the harsh rhetoric, NATO is not trying to launch a Cold War with Russia.
“We do not seek confrontation with Russia and we want to prevent the possibility of a new Cold War,” the secretary-general said at a press-conference in Brussels.
However, oddly enough, the statement was followed by the announcement that the block intends to deploy more troops and military hardware to the Baltic countries and Poland, thus further beefing up NATO’s presence in Eastern Europe. The plan is yet to be approved by NATO’s defense ministers, who are set to consider the proposal on February, 10.
NATO’s Response Force was already strengthened from 13,000 troops to 40,000 in 2015.
Read more
NATO kicks off naval drills in Black Sea with Ukraine
NATO has been persistently increasing its military presence in Poland, Ukraine, and the Baltic states since Russia’s reunification with Crimea in 2014 and the outbreak of conflict in eastern Ukraine.
In late August and September of 2015, NATO staged its biggest airborne military drills since the end of the Cold War, which involved about 5,000 soldiers from 11 member states. The drills took place in Germany, but were closely watched by the Russian military.
In addition, naval drills in the Black sea hosted by Ukraine took place in September that included warships and aircraft, as well as 2,500 troops and some 150 military vehicles, from 11 NATO and NATO-friendly countries.
Probably the biggest drills since 2002, known as “Trident Juncture 2015,” were conducted in October of 2015. The exercises, which spanned Portugal, Spain and Italy, included 36,000 international troops, as well as more than 60 warships and about 200 aircraft from 30 states.
NATO expansion towards Russia’s borders was named one of the key security threats in Russia’s security strategy for
Posted by eirenae at 1:35 PM No comments:

Wreckage of the MH17 airplane is seen after the presentation of the final report into the crash of July 2014 of Malaysia Airlines flight MH17 over Ukraine in Gilze Rijen, the Netherlands, October 13, 2015. © Michael Kooren / Reuters
486
Moscow provided the Netherlands with radar and other data on the MH17 crash but it has all been ignored, a Russian aviation official said, responding to the relatives of Dutch victims who recently wrote to President Vladimir Putin.
Oleg Storchevoy, the deputy head of Rosaviatsia, the agency representing Russia in the Malaysia Airlines flight MH17 crash investigation, has personally addressed the relatives of the victims in a lengthy letter.
READ IN FULL: Official letter on MH17 investigation by top Russian aviation official Oleg Storchevoy
"I would like to emphasize that Russia is strongly committed to establishing the actual cause of the crash, and has consistently done everything in its power to help find out the truth, both throughout the course of the technical investigation and following its official completion," he said.
Desperate for answers that would shed the light on who fired the BUK missile that allegedly hit the passenger plane on July 17, 2014, and dissatisfied with the slow-moving Dutch probe, the relatives have turned to the heads of several states, including Russia’s. On January 22, they sent a letter to Putin, asking about the primary data from radars and satellites, which they think is crucial.
"We did not impose any conditions or restrictions regarding further use and disclosure of radar data, records of phone conversations and other data we submitted to the Dutch Safety Board (DSB) at its request. Moreover, Russia has stored all that data to this day, and is willing to provide it once again to the relevant authorities," said Storchevoy.
In mid-January, the relatives wrote to Dutch Prime Minister Mark Rutte, demanding a global campaign to obtain radar images that could help identify those responsible for the death of their loved ones.
“We can’t accept that people have refused to provide crucial information,” they wrote.

‘Only radar data available is Russia’s’

While the Russian authorities were not involved in controlling the fatal flight, they still soon became de-facto participants of the investigation due to the unique information obtained from radars in Rostov-on-Don, a Russian city not far from the Ukrainian border.
"I would like to stress that Russia disclosed all of its available satellite data in the days immediately following the crash," said Storchevoy.
Rosaviatsia’s deputy head stressed that the Russian radar data was the only such data available to the Dutch investigators, as it appeared that Ukraine’s radar stations “for unknown reasons” were not functioning on July 17. Neither did Ukrainian authorities have any backup system to maintain flight safety in the military zone.
Read more 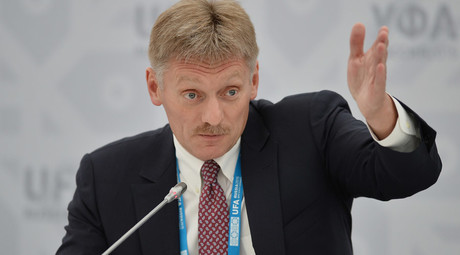 Having provided the radar data and phone records requested by the Dutch, Russia has never prohibited the Netherlands from either sharing with other states or publishing the information generally, Storchevoy said.
However, this evidence appears not to have been reflected in the Dutch Safety Board’s (DSB) final report, released in October.
Russia is still ready to provide the same data, which it collects in video files in accordance with domestic regulations, to any authorized parties.
Moscow has also published the satellite images from July 2014 that showed Ukrainian BUK missile systems maneuvering in the conflict zone close to the site of the crash. It had handed the same images over to the DSB. However, this evidence has been ignored as well.
"This data confirms, among other things, that there was movement and increased activity by Ukrainian Buk surface-to-air missile systems observed within the conflict area in Eastern Ukraine one day ahead of the tragedy," Storchevoy mentioned.
"Russia shared that information with the Dutch Safety Board, but once its final report was released, it turned out the DSB had chosen not to consider Russian satellite data or even include them in the report,"he added.

Speaking of Russia’s efforts, the Rosaviatsia officials accused the DSB of leaving a number of important questions unanswered, of distorting the facts and of deliberately carrying out the probe at a sluggish pace.
Storchevoy has called on Ukraine and the US to provide the information they have. He said Washington“must” share satellite images that it claims it has, while Kiev should either share its radar data or prove that it doesn’t have it.
"As far as the quality of the technical inquiry is concerned, I must point out that, in a totally inexplicable fashion, its final report leaves the most important question unanswered: How far is Ukraine responsible for failing to close its airspace? The report is extremely vague regarding the responsibility of the government in Kiev," Storchevoy said.

In his address to the relatives of Dutch victims, Storchevoy has stressed Russia’s commitment to uncover the truth. Even after the end of the official probe, he said, Moscow is still going out of its way to find answers to major questions.
Moscow provided data from all of its radars that recorded the MH17 flight to the Dutch Safety Board in August 2014, shortly after the catastrophe, Storchevoy said.
Read more 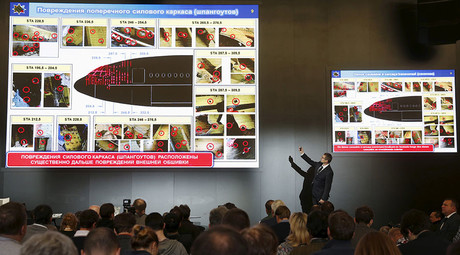 BUK manufacturer says Russian-made air defenses ‘absolutely’ not involved in MH17 crash
Aside from that, Almaz-Antey, the manufacturers of the 9N314M BUK missile that the investigation said downed the plane, have staged two real-life tests. They involved decommissioned aircraft and BUK anti-aircraft missiles to verify whether missile systems currently deployed by Russian troops could have been involved in the downing of the Malaysian Airlines aircraft.
However, the results of these tests have also been ignored, as has Russia’s invitation to the Dutch investigators to participate.
Storchevoy has urged the relatives of the MH17 victims to not give up on their efforts to dig out the truth and to demand maximum transparency from both Dutch authorities and their partners in the probe.
"Russia has repeatedly pointed out that the Dutch technical investigation was performed in an extremely nontransparent and biased manner. We support you in your efforts to get answers to the numerous questions that remain unanswered," he said.
The Netherlands is finalizing its second, criminal investigation into the MH17 incident, which is likely to point fingers at specific suspects. The crash killed nearly 300 passengers and crew members on July 17, 2014 in the Donetsk Region of Eastern Ukraine. A majority of those killed in the crash were Dutch citizens.
READ MORE: 4 questions for Dutch probe into MH17 crash
Rather than pointing fingers, Storchevoy says it would be better for the DSB to answer questions regarding why the investigation took so long and why they hid certain pieces of information.
"The Dutch authorities should explain why they distorted facts and concealed data, and why they ignored important data provided by Russia. The DSB should explain why its final report distorted data about missile fragments and places where they were found, why it failed to thoroughly examine penetration holes on the aircraft, why it mismanaged the aircraft debris, why it misrepresented the probable location from which the missile was launched, and many other discrepancies in the final report," Storchevoy concluded.
Posted by eirenae at 4:44 AM No comments:

"Sanders represents one of the most exciting challenges to the political establishment since FDR. The Vermont senator’s New Deal for America targets widening inequality while holding the big banks that caused our current financial crisis responsible. He represents the promise of the young activists who marched on the streets in the name of the Occupy movement three years ago, those who looked to a future in which they would die in debt and decided to do something about it. If the American Dream has become rigged, Sanders is a sign that voters may be waking up." http://www.salon.com/2016/02/08/the_truth_about_the_dem_civil_war_bernie_vs_hillary_might_seem_life_and_death_but_it_could_always_be_much_much_worse/
Posted by eirenae at 4:33 AM No comments: