"Blood Lies"*: Memory is the Gateway to Liberation

It is high  time to go back in order to save the future.

In striving to  overcome war, hunger and all the other  atrocious violations of human rights, that  this world of abundance and wastefulness offers for the wast majority of its inhabitants.

The origin of modern slavery lies in the treacherous, creeping and eventually  brutal overthrow of the first socialist societies. Imperfect as they were they offered human progress for its citizens in terms of free education, health-care, child-care and abundant possibilities of participation in the decision making processes.

The pattern of defamation is well known and yet  remains still un-comprehended  by the many. The enemies of human progress, the elites of the Western world  call those who defend themselves against cruel exploitation and expropriation "terrorists". If we look at the Middle East  and IF consider the fate of the Palestinian People or to  Eastern Ukraine, were mostly Russian speaking people defend themselves against attacks on their properties and even lives, or to Serbia in the 90s, we  will understand what would have happened to the Soviet Union in the 30s if the Soviets had not sentenced their internal enemies who were accused of sabotage and high treason.
We must look back in order to understand: Very soon after the  successful revolution the young Soviet Union was brutally attacked by the United Western Front. Invasion armies entered the huge country from all borders. However, the Soviet community  was already strong. Their peoples bravely defended their  freedoms, their achievements. They threw the  invaders out of the country and they  survived within smaller borders. After the intervention wars the Soviet peoples  built up an entirely new society within practical no time. They moved their backward  and partly feudal country, that had  a high rate of illiterate peoples then, into a forward looking  industrial society. In 1941 they even  succeeded in  resisting the  attack of the  strongest army in the world: Hitler's Wehrmacht. Only a few years after the invasion wars of the second decade of the twentieth century, the country was forced into yet another war. 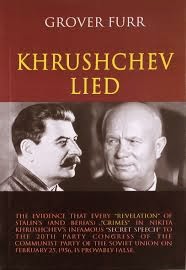 Today such  invasive attacks are called humanitarian interventions. They are waged under the Pretext of R2P = "Responsibility to Protect",  under the missionary slogan to "to save guard  poor  people suffering under dictatorships of a  Hitlerian caliber". Propaganda has  become much more advanced and more sophisticated than it used to be under Goebbel's rules.

There is  plenty of   literature available from the 30s and 40s that help  document that  the Soviet society under Stalin  was the most advanced democracy of the world of the 1920s, 30s and 40s.

After 1956 such testimonies have become extremely  rare. 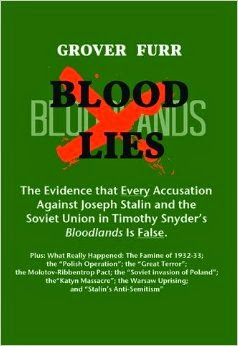 However, research never stops and today we can turn to Grover Furr, a US American academic,  a linguist and expert into anglo-saxon medieval literature, a scholar who has devoted himself into  proving that every single statement of  Ukrainian Nikita Chruschtschev at the fatal XXth Party Congress of the Soviet Communist Party in 1956 (the bases for all the following allegations against "brutal incompetent Stalin dictaor") were nothing but blatant lies. Grover's second book on the issue   "Blood Lies" deals with  Timothey Snyder's "Bloodlands", a highly praised  alledged "scholar" in US manipulated media. Grover Furr  however uncovers the lies on "Katyn", the so called "Famine forced upon the Ukrainian people" in the 30s and more of the sort of slander.

I have personally  been working on these issues since 1999, when  during the third war on Belgrad in one century, I developed doubts on the way Milosevic and the Serbs were portrayed in our media.

The anti- Russian lies, the warlike  hysteria that has been unleashed  during the year 2014  aiming at president  PUTIN and his government seems unprecedented.

Whereas  Joseph Stalin used to be considered a beloved hero the world over,  Wladimir PUTIN had  more of the image of a sober and brave  politician at home, of a man who successfully helped stop the sell out of his resourceful country. PUTIN was considered the man to clean the stable of AUGURAS.  With the help of his colleagues  his
struggle continuous to help  save the world from another even more catastrophic war. The distorted image  of this man presented to a Western audience goes  to show what  highly sophisticated and well financed propaganda can do.
We are surrounded by a web of lies said Harold Pinter in his Nobel Price speech.

Now, president Putin is a highly estimated leader at home with a support rate of 85% of his constituency. He is also more and more popular abroad.

Stalin was even more popular the world over than Waldimir Putin. Stalin was of course  not the murderer and dictator as he is being  continuously portrayed. On the very contrary.
In our struggle for peace and for a world without war we must face this truth and confront the lies.

Bert Brecht once formulated a message to the  next generations saying that,   "We,  while struggling for  friendliness could not always be friendly ourselves".Brecht proudly  received the Stalin prize for Peace in the early fifties, a Soviet equivalent to the depreciated Nobel Price .

The dilemma that forces us into  sometimes taking refuge  to "unfriendly" methods applies for all freedom fighters, for all who are striving against oppression. It is impossible to overcome occupation, heavy armery, nuclear weapons and other deadly devices  with purely a friendly smile, However:
The main weapon on our side remains ENLIGTHENMENT.
KNOWLEDGE IS POWER.
______
* Grover  Furr, "Blood Lies -  The Evidence that Every Accusation Against Joseph Stalin and the Sovjet Union in Timothy Snyder's Bloodlands Is False. Red Star Publishers, New York, 2014

Irene Eckert
Posted by eirenae at 7:12 AM