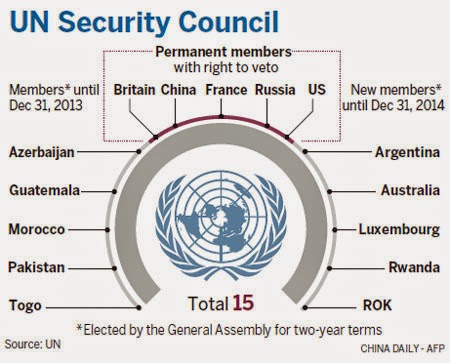 Russian President Vladimir Putin discussed on Monday with the permanent members of the Security Council the implementation of the peace plan on resolving the crisis in south-eastern Ukraine, Kremlin spokesperson Dmitry Peskov has said.
“During the session, the sides discussed the implementation of the peace plan aimed at resolving the situation in south-eastern Ukraine, including complying with the points of the 'Putin plan',” Peskov said.
The discussion also focused on cooperation with partners as part of the effort to fight against the Islamic State (IS) militants in the framework of the international law and expanding Russia’s role in combating the deadly Ebola virus.
The meeting was attended by Russian Prime Minister Dmitry Medvedev, Kremlin Chief of Staff Sergey Ivanov, Federal Security Service Head Alexander Bortnikov, Foreign Minister Sergey Lavrov, Security Council Secretary Nikolay Patrushev and his deputy Rashid Nurgaliyev, Defense Minister Sergey Shoigu, State Duma Speaker Sergey Naryshkin, head of Russia's Foreign Intelligence Service Mikhail Fradkov and a permanent member of the Security Council, Boris Gryzlov.

On September 3, President Putin outlined a seven-point plan to settle the situation in south-eastern Ukraine. The plan came two days ahead of the OSCE-mediated talks in Minsk on September 5 during which the parties to the Ukrainian conflict agreed on a ceasefire and exchange of captives.
In his plan, Putin called for an end of active offensive operations by armed militia groups in south-eastern Ukraine in the Donetsk and Luhansk regions and withdrawal of Ukrainian army units to a distance that would make it impossible to fire on populated areas using artillery and multiple launch rocket systems.
The plan also urged full and objective international monitoring of compliance with the ceasefire and monitoring of the situation in the safe zone created by the ceasefire, for an exchange of individuals detained by force on an ‘all for all’ basis without any preconditions and for opening humanitarian corridors and delivering humanitarian aid supplies to affected areas.
First published by Itar-Tass.
Posted by eirenae at 5:20 AM