30, 000 soldiers arrive in Europe without masks

by Manlio Dinucci
The United States are demonstrating their power by organising the largest transfer of their troops in Europe on the occasion of the Defender Europe 20 exercises. This country, which only a few years ago sacrificed its soldiers without warning in its nuclear tests, is taking no precautions for its soldiers faced with the corona virus epidemic.
VOLTAIRE NETWORK | ROME (ITALY) | 9 MARCH 2020 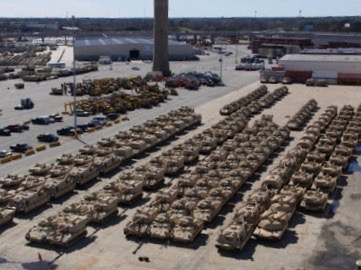 The United States have raised the alert for the corona virus in Italy to level 3 - (« avoid non-essential travel »), and taken it to level 4 for Lombardy and Veneto (« do not travel »), the same level as for China. The airline companies American Airlines and Delta Air Lines have cancelled all their flights between New York and Milan. US citizens who are travelling to Germany, Poland and other European countries are at alert level 2, and must take « increased precautions ».
But there is a category of US citizens which is exempt from these standards : the 20,000 soldiers who have begun to arrive from the United States to the ports and airports of Europe for the Defender Europe 20 exercises, the greatest deployment of US troops in Europe in the last 25 years. With those who are already present, approximately 30,000 US soldiers will be participating in the execises in April and May, alongside 7,000 others from the 17 member countries and partners of NATO, including Italy.
The first armoured unit arrived from the port of Savannah, USA at Bremerhaven in Germany. A total of 20,000 pieces of military equipment are arriving from the USA at six European ports (in Belgium, Holland, Germany, Latvia and Estonia). 13,000 others are provided by the stocks that were pre-positioned by the US Army Europe, mainly in Germany, Holland and Belgium.
These operations, explains the US Army Europe, « require the participation of tens of thousands of soldiers, military personnel and civilians from numerous nations ». At the same time, the majority of the contingent of 20,000 soldiers arrive from the USA, landing at seven European airports. Among this number are 6,000 from the National Guard of 15 States : including Arizona, Florida, Montana, New York and Virginia. At the start of the exercise in April – explains the US Army Europe – the 30,000 US soldiers « will deploy throughout the European region » in order to « protect Europe from any potential threat », with a clear reference to the « Russian menace ». General Tod Wolters – who commands US forces as well as the NATO forces in Europe, as Supreme Allied Commander - assures that the European Union, NATO and the United States European Command, have worked together to improve the infrastructures ». This will allow military convoys to move quickly along the 4,000 kilometres of transit routes.
Tens of thousands of soldiers will cross the frontiers to perform exercises in ten countries. In Poland, US soldiers will arrive in twelve training areas, equipped with approximately 2,500 vehicles. US paratroopers from the 173rd Brigade based in Venetia, and Italians from the Brigade Folgore based in Tuscany, will go to Latvia for a joint launching exercise.
Defender Europe 20 is being carried out in order to « increase the capacity of deploying a major combat force in Europe from the United States ». It is taking place according to times and procedures which make it practically impossible to submit tens of thousands of soldiers to the sanitary standards set up to deal with the coronavirus, and prevent their contact with local inhabitants during their rest periods. Furthermore, the US Army Europe Rock Band will be giving a series of free concerts in Germany, Poland and Latvia, which are sure to attract a large public.
The 30,000 US soldiers, who will « deploy throughout the European region », are thus exempt from the preventative standards set up to deal with the coronavirus crisis which, on the other hand, do apply to civilians. The assurance given by the US Army Europe suffices : « we have the coronavirus under surveillance » and « our forces are in good health ».
At the same time, no-one is considering the environmental impact of a military exercise of this scale. US Abrams tanks will be taking part – each of them weighs 70 tonnes, with armour-plating made of depleted uranium, and consumes 400 litres of fuel for 100 kilometres, producing heavy pollution in order to achieve maximum power.
In this situation, what is the reaction of the European Union and national authorities, and what is the WHO doing about it? They are covering their faces with maskes, not only to cover their mouths and noses, but also their eyes.
Manlio Dinucci
Translation
Pete Kimberley
Source
Il Manifesto (Italy)

The Fear Virus Pandemic
“The Art of War”

The future of "America", increasingly armed
“The Art of War”

China, and not only Iran, is targeted by the USA

What is the real nuclear threat in the Middle East?

To send a message