U.S. Peace Council’s Exclusive Interview with Dr. Bashar Ja’afari, Permanent Representative of the Syrian Arab Republic to the United Nations, and Head of the Syrian Delegation at the Geneva III Negotiations

B.A. [USPC]: With sincere thanks for allowing us to have this interview with you despite your extremely busy schedule, please start by giving us an overall view of the state of affairs with regard to the Syrian crisis today. 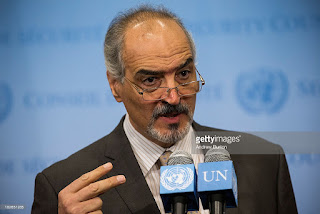 B.A.: How do we reconcile these negotiations, on the one hand, with the intensified Turkish and Saudi military attempts to intervene in Syria, on the other? It seems that so long that they thought they had the upper hand in the war, they were willing to enter negotiations, but now that the Syrian Army is taking the upper hand in the war, they are shifting to what you referred to as Stage II. Will they still be willing to negotiate under these transformed conditions?

Dr. Ja’afari: No, no. As I said at the beginning, the Turkish­Saudi escalation is mainly due to the fact that they got hysterical. The Syrian Army has achieved victories on all fronts, next to the Turkish­Syrian border as well as the Syrian­Jordanian border and Syrian­Israeli border. This kind of escalation has only one justification: it is mainly due to the failure of the Turkish policy, failure of the Saudi policy, and the failure of the Jordanian policy. But these three neighboring countries of Syria would not have dared to take up this escalation to this highest level if Washington did tell them not to do it. So the master of the game is Washington. Washington should tell these allies that enough is enough. That playing with Syrian blood and committing this bloodshed in Syria has reached an intolerable degree and should stop. We need to engage in political settlement, but to engage in this political settlement you need credible partners. You don’t need to deal with treacherous elements, agents and spies. You need to work out a political settlement with national opposition — people who are careful about rescuing their country from the mercenaries and terrorists coming from all over the world with the help of the Gulf States’ money and the Turkish logistics. That is why I said we are at a turning point: either we go toward a political settlement or we go toward military escalation.

B.A.: Why is Saudi Arabia so insistent on a confrontation with Syria?

Dr. Ja’afari: We should also shed some light on the reasons that have motivated the Saudis to open the Pandora’s box, meaning, threatening to send troops into Syria. The Saudis failed in Yemen catastrophically, as you know. Today, hundreds of Saudi prisoners were taken by the Yemeni forces. Twelve Saudi high­level officers from the headquarters signed a joint letter to the Crown Price asking him not to enter into any other military misadventure in Syria because they are incapable of continuing their aggression against Yemen. When the Saudis wrongly claim that they would like to send troops into Syria, I think they are either crazy guys, or they are mere dreamers, or they are amateurish politicians. But in all cases, this is going to be another scandal to be added to the Yemeni scandal, and to the Iraqi scandal. The Saudis have failed at all fronts — Yemen, Syria, Iraq, Palestine — and now they have lost the trust and confidence of everybody, exactly like Erdogan.
And this is why the Saudis are now trying to gather another wave of international mercenaries — and they call them the “Islamic Alliance,” which is neither Islamic nor an alliance, but a continuation of collecting garbage from all over the world and calling them “Islamic” forces. Actually, the Saudis have never stopped sending terrorists to Syria under this label of “Islamist” groups. So there is nothing new in this regard, except that the level of craziness of the Saudis has reached a high degree of irresponsibility.
The Saudi regime has stopped paying salaries to doctors in Saudi Arabia. High­level officers, as I said, are energetically against engaging in any military misadventure after the failure in Yemen. They have huge domestic troubles in the eastern part of Saudi Arabia as well as elsewhere. As

you know, the price of oil has dropped to a very low level. The Saudis are almost in bankruptcy right now. They are facing huge challenges, economically, politically, and socially, because of the violation of human rights, as you know, and the execution of the Sheikh Nimr Baqir al­Nimr, etc., etc. They are adding failure after failure, and they are still stubborn and insisting on committing the same mistakes, again and again and again. But this time, as the British newspaper The Independent put it yesterday, Saudi Arabia is going to be disintegrated soon.

B.A.: Going back to actual negotiations, we know they were delayed from the very beginning. What are the obstacles to this process at this stage? What is keeping these negotiations from really going forward?

Dr. Ja’afari: Number one: it is not about negotiating. It is about indirect discussions, indirect talks. That was the option chosen by De Mistura, the Special Envoy, himself. He wanted it to be so, and we agreed on that. This is number one: it is not about negotiating; it is about indirect talks.
Number two: everything was very badly organized in Geneva III. When we went there, we engaged immediately after our arrival in Geneva. Two hours after landing at the airport of Geneva, we went ahead to our meeting with De Mistura at the Palais de Nations, which is the United Nations’ headquarter. But the other delegation, which is called the Riyadh group, did not come until four days later. And when they came, they didn’t go to De Mistura. He went to them at the Hotel.
Beside the so­called delegation of the Riyadh group, whose names were conveyed to De Mistura, another guy came from Riyadh with 102 other persons on board of a Saudi Airline. They didn’t even observe or respect even the framework — the form, forget about the substance — of these indirect talks. So, things did not take off because the organization was very bad. The Special Envoy did not treat everybody on an equal footing in according with the provisions of 2254 Resolution and the Vienna Declaration. He spoiled only the Riyadh group at the detriment of other delegations. And he didn’t qualify as others as delegations. He considered the delegation of women as advisers for him. He considered the delegation of civil society as advisers to him. He didn’t deal with the national domestic opposition coming from Damascus. He didn’t deal with the group of Moscow and the group of Cairo on an equal footing with the group of Riyadh. So he committed many mistakes and he was under huge pressure from Washington and the Saudis and the Turks and the French. This is why things did not take off, because there was no fuel for this missile of indirect talks at Geneva III to take off.
We engaged with him twice, officially speaking. I sat with him twice in official meetings, with my delegation of course. He acknowledged this. He said that the Syrian government was disciplined, organized, etc., etc. So he commended our participation. But again and again and again, he came to Geneva, he invited terrorists to come to Geneva, the guy from Jaysh al­Islam, who came from Riyadh with the group of Riyadh. It is a terrorist organization but he still insisted on inviting these terrorists. He invited another terrorist from Ahrar al­Sham also, who works for the Turks. There were many scandals over there, and all these scandals led to this deadlock and impasse. So things did not take off and we didn’t engage even in any formal discussions. As he called it, the exploratory talks — and I called it the preparatory talks — for Geneva III did not start in Geneva.

B.A.: What is the key to opening this lock? Who has the key?

Dr. Ja’afari: De Mistura has the key. Washington has the key. The British, the French, the Russians, everybody has the key, because they should come up with the list of who is terrorist and who is opposition. That is the key of any success.

B.A.: Do you think there is going to be any agreement on that?

Dr. Ja’afari: Hopefully, hopefully. I think there he [De Mistura] got that point. He understood that, without identifying who is terrorist and who is opposition, things cannot take off. I hope he got it.

B.A.: So how do you see the future from here?

Dr. Ja’afari: We don’t know yet. As I told you, if the Turkish regime insisted on sending troops inside Syria, that would mean a huge escalation in the area. That would trigger not only a regional war but an international war — a world war, unfortunately.
Erdogan is playing with fire, with everybody. His Prime Minister created and invented this wrong policy called “zero problem policy” with Turkey’s neighbors. Now he has ended up with “full problem policies” with all the neighbors of Turkey. He also has very bad relationship with his best ally, Washington, with Europeans —France, Britain, Germany, with Cyprus, with Armenia, with Iran, with Iraq, with Syria, and who else? Bulgaria. No neighbor of Turkey has a normal relationship with Ankara. So, Erdugan cannot be right and everybody else wrong.
The Turkish regime has even blackmailed the Europeans with this phenomenon called the “Syrian refugees,” for instance. He let flows of so­called immigrants to invade Europe in order to blackmail the Europeans: either you allow me to establish this no­fly zone in the northern part of Syria, or I will inundate you with refugees — not only from Syria, because Syrians are only 20 percent of those who went to Germany, but from all over the world: Afghans, Eritreans, Sudanese, everybody claims he Syrian nowadays. Everybody is gathered by the Turks in Turkey and sent to Europe as Syrian refugees.
The Turkish policy has failed. Blackmailing is over. Now they are escalating, militarily speaking. And they should assume responsibility for the consequences of their act. But their best allies should stop them. If we want to save, maintain and rescue peace all over the world, pressure — serious pressure — should be exerted on Erdogan and his Prime Minister.

B.A.: But Turkey is a NATO state, a member of NATO. What are these Western powers doing right now? What is their role in this? Saudis and Turks cannot really be acting that independently.

Dr. Ja’afari: Thank god the NATO did not buy the Turkish policies toward Syria. NATO even denied any assistance to Erdogan. Germany withdrew the missiles from Syrian­Turkish border. NATO is not happy with Erdogan’s wrongdoings in the area. And this is a good sign. But, still, things cannot be limited and restricted to this political pressure. Washington, and the Europeans, should tell Erdogan that enough is enough. He is threatening to trigger a third world war.


B.A.: What can people in the Western countries, especially in the United States and Europe, do to push for a political settlement of the Syrian crisis and avoid yet another, this time more devastating, war?

Dr. Ja’afari: The Americans and Europeans should look for their own interest. If the Turks enter Syria, a Turkish­Russian military confrontation will erupt immediately. A Syrian­Turkish military confrontation will erupt immediately. The Iranians wouldn’t remain quiet. You will see that Egypt will not remain quiet. Iraq will not be quiet. It is going to be a huge problem for everybody. So, the main question is: Is it in the interest of everybody not to interfere? Not to exert pressure on the Saudis and the Turks in this regard? Is it in the interest of the USA to trigger a third world war with Russia right now? I don’t think so.