Armistice Day - An Occasion To Stop Waging and Preparing  War!


No To War-Like Propaganda!
No To Enemy Images! 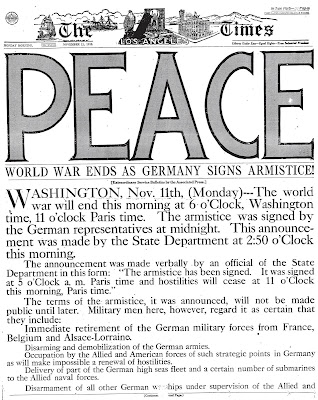 Yes to Diplomacy!
Yes to Defending The UN-Charta!
Feed The Cities Not The Pentagon!

„The entire citizenry will wish to join hands in the common purpose to end all wars“, a noble promise of Roosevelt Presidency yet unfulfilled.

An official act declared 11th of November 1938 a legal holiday1—a day dedicated to the cause of world peace. In 1919 after the Great War number I Armistice Day has been proclaimed first by President Wilson. He saw it  as an opportunity for „ America to show her sympathy with peace and justice in the councils of the nations."

70 years ago in May 1945 US and Russian Forces joined hands at the Elbe River in Germany. Dancing with joy they celebrated their common victory over Hitler fascism. In 1962 General Eisenhower warned in his farewell address to the American people against the military industriell complex that would swallow all resources otherwise needed for public wellfare and so become a dangerous factor in itself. He concluded „Disarmament with mutual honor and confidence, is a continuing imperative.“

Today the „Red Scare“ does not exist anymore as a pretext for further re-armament. And yet the wasteful octopus has been spreading to unimaginable dimensions. New pretexts have been created. Today the never ending „War on Terror“ must serve as a threadbare justification for an ever more mindboggling arms built up. This phoney war has given birth to prolific monsters.

Modern Russia has been offering a helping hand again to rid the world of these dangerous creatures. Yet it is being accused as an aggressor herself. The same holds for countries like Syria and Iran who are bravely struggling against these dangerous elements, They  are being treated like terrible enemies themselves. New Hitlers had been created ex machina before. After having been demonised in such a way Milosevic, Saddam Hussein, Gaddhafi have been cold bloodedly murdered. But putting them aside has not stopped ongoing US-led military interventions on a global scale. The false, unjustified and illegal claim for a „Responsibility to Protect“  is only one more guise to manufacture US and other people's consent for the global military meddling of their respective country's war machine.

Other nations have been bullied into supporting this monsterous war machine. If they do not follow US orders they will be smashed either through economic sanctions, acts of sabotage, infiltrations of agents and electronic spying on all levels of their society. In the end alleged leaders of opposition movements are being killed by drone warfare.

As a result resistance to this dangerous war drive has been weakened on a global scale.
Let us  be clear: Every single oppositional movement has been infiltrated. With the help of a mighty propaganda machine our consciouness has been blinded collectively. We have - to a very large extent - lost awareness of who his friend and who is foe. Victims of US-aggression are being blamed as pepetrators. As a consequence it has become difficult to organize against the Bully. Calls to action are always well balanced, accusing both sides, victim and perpetrator. Nothing can be achieved this way. This stalemate must be challenged.

In Germany whoever speaks out the truth at present is immediatelly being smeared as anti-semitic, as pro-oppressor, as pro-NAZI even ex-cluded from the community of the likeminded. His or her credibility is being smashed publicly. With respect to Russia a new smear word has been created „Putin-Versteher“. This means a person who understands Putin. In other words, trying to comprehend (!) a neighboring country's policy has become a fellony.

Our struggle, however is not for sympathy with one nation or the other, one party or the other or one politician or the next. Our struggle is for peace! We must stop the military industriell complex of our respective countries before it stops us! We must overcome all differences and preferences in order to unite for human survival. The war machine  is already destroying the basis  of our mother earth.

We will not accuse anybody personally but we do  denounce a system that causes death. This system has proven its incapability to solve human issues. Politicians are caught in that Black Widows spider web, too. Let us join hands for ending this ruinous War Machine. Let us denounce aggressor and profiteer and address the root causes of  the ongoing terror. Let us stop the profit making war machine and its most aggessive alliance NATO.
Irene Eckert for the Working Circle For Peace Policy in Berlin Germany on November 11th 2015
_______
1) Act 52 Stat. 351; 5 U. S. Code, Sec. 87
Posted by eirenae at 12:15 AM